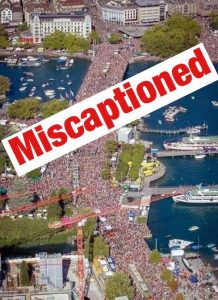 What is fascinating is the fact that it appears there are people who are deliberately posting fake photos of other events so claimed fact-checkers can label the event as a whole is fake to support the fake press. Here we have a photo which is obviously Zurich. It is so obvious that anyone who has traveled to Berlin and Zurich will instantly know the difference. This is not even credible showing a previous event in Berlin.

Now there are other sources coming out with real photos of Berlin and reporting that the media is fake. The politicians have blamed the police for not enforcing masks and social distancing. This entire thing of self-proclaimed fact-checkers and fake news is becoming just insane. It’s always to discredit that the people who are protesting against lockdowns and to discredit them in any way possible. We have entered a new age of propaganda. This is turning into a war to try to discourage people from protesting.

However, the decision to impose the lockdown again, according to reliable sources, is because to lift the COVID restrictions, people cannot pay debts and the financial crisis will hit. This is really crazy for they have to be lifted and then rents have to be paid and the entire nightmare of this exaggerated response will have to be faced. It is inevitable! Our sources are deeply concerned in Germany and believe these restrictions have unleashed massive damage which will not surface until the restrictions are lifted.