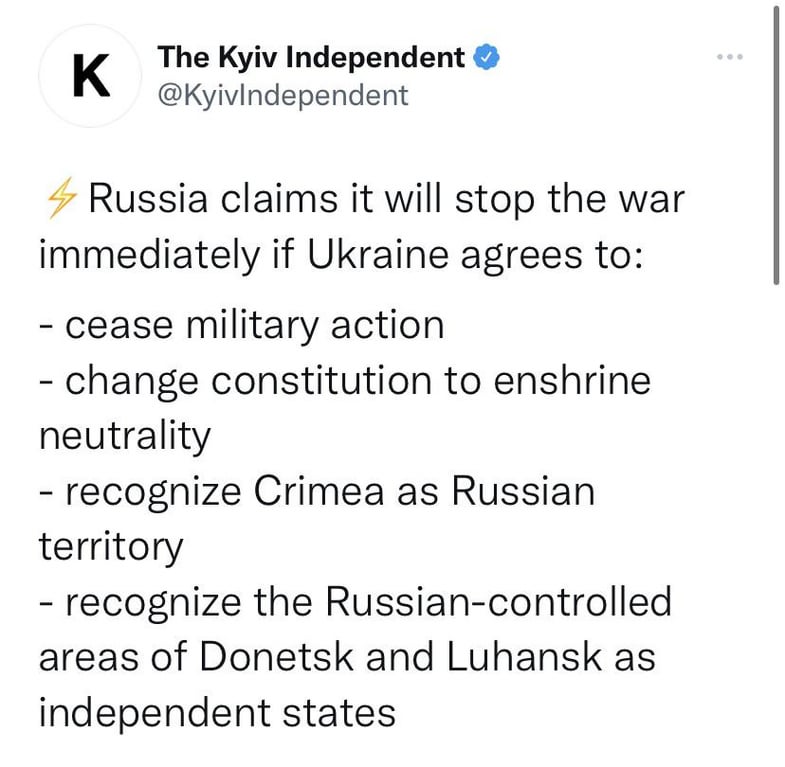 Reliable sources have confirmed that Putin offered to stop the war instantly if Kyiv give up its army, change its constitution to become a permanently neutral country in accordance with the Budapest Agreement, and acknowledge Crimea as part of Russia along with Luhansk and Donetsk are to be free separate republics. Zelensky has refused. Luhansk and Donetsk have been fighting for their freedom ever since the 2014 Ukrainian Revolution. This is what was to be settled in the Minsk Agreement which has been dragging out for 8 years.

The real question many Ukrainians now have is Zelensky was elected promising to ease tensions with Russia but he has done the opposite even cutting off the water supply to Crimea. Should the Ukrainian people vote on this offer? Why put the country at risk for those provinces that are 98% Russian, to begin with? The fear has been that Zelensky is really a poppet for the West that wants a confrontation with Putin. They have created an Iron Curtain in the financial world and that is now simply becoming permanent. Russians are being discriminated against in Western Europe and America to the point that such bad blood has now taken place that the world is dividing and there is no return to normal. This is not just a new Financial Iron Curtain with Russia, we are looking at the same reaction with China that will support Russia at the end of the day.

China’s top diplomat just accused Washington of trying to create an Asian version of the U.S.-European NATO military alliance joining Japan, India, and Australia to create a similar NATO-like Asian block. He further warned that it is up to the Biden administration to improve relations with North Korea.

See also  Zelensky supporters have egg ALL OVER their faces

We are NOT on a path toward world peace. There is nobody interested in trying to reduce tension. Everything now is name-calling and hostility on every front.