However, for some weird reason, Rand Paul failed to ask Bill Gates’ dog (you can find many references to Fauci on the Bill and Melinda Gates Foundation website, but just as an example, here is a press release from 2003 which talks about placing Fauci on the board of a group receiving $200 million) a number of critical questions.

The nation’s top infectious diseases doctor Anthony Fauci on Thursday clashed with Sen. Rand Paul (R-Ky.) over the need for people to continue wearing masks once they’ve already been infected with or vaccinated against COVID-19.

“You’re telling everyone to wear a mask,” Paul said. “If we’re not spreading the infection, isn’t it just theater? You have the vaccine and you’re wearing two masks, isn’t that theater?”

“Here we go again with the theater,” an exasperated Fauci responded. “Let’s get down to the facts.”

Truth be told, this is not theater, and by that I don’t mean Fauci is right. All this covid extravaganza is nothing more than a planetary social engineering project, which is aimed at creating a new society by obliterating the old one.

The great reset phrase coined by WEF comes to mind.

Now, the problem with Rand Paul is that he failed to deny (I love that word) the retarded nature of the covid hoax, which is what he should have done in the seven minutes he had with Fauci.

Rand should have asked Fauci about the covid death toll and the (lack of) accuracy of the PCR test, or about the differences between the normal flu and covid.

He also should’ve stated that all flu deaths are now covid deaths, and that there’s no logic in quarantining the healthy, or that PCR test’s “asymptomatic cases” were designed to justify that after they’d already decided to quarantine the healthy.

Rand failed to go on record publicly with the American people, and let them know that some of the so-called vaccines are in fact gene therapy; instead of all that, Rand Paul just asked the most obvious (and dumb) question about the “mask thing”. I’m surprised he didn’t go for “the science behind six feet of social distancing.”

I’m tired of Fauci being called an expert. An expert is someone who has proven themselves right multiple times in their field of study. Fauci has been wrong about everything in his career. He killed tens of thousands of people with AZT. Most of the real experts call Fauci a total fraud and an imbecile.

He got where he is through bribes, kickbacks, and playing the political game. I mean really, if Nancy Pelosi calls you an expert, are you really supposed to take her word for it?

Fauci stands to make millions of the Covid scam, ad in fact he already has. That is his motivator, not the truth.

Kary Mullis called Fauci the biggest fraud in medical history. He’s not the only high ranking scientist to say so. Then you have the very obvious Arkanciding of people who worked to out Fauci and his minions.

Do the exact opposite of anything Fauci says, and you’ll be better off. 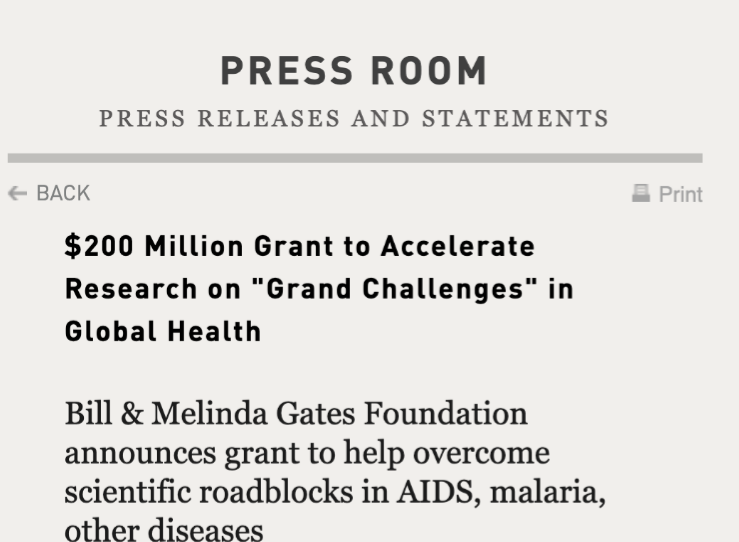 Here is another press release, from 2002, stating that Fauci’s partner during the HIV-AIDS hysteria, Dr. Richard Klausner, would be appointed the Executive Director of the Gates Foundation. Klausner ran that organization from 2002 to 2005.

Fauci and Klausner ran a vaccine program together at the National Cancer Institute, and were jointly awarded the “Cancer Leadership Award” from the Friends of Cancer Research in 2018.

Mixing government and individual corruption yet again, Fauci is the head of the National Institute of Allergy and Infectious Diseases (NIAID), a branch of the National Institutes of Health, which is in turn a branch of the US Department of Health and Human Services. The NIAID received seven (7) “grants” from the Bill and Melinda Gates Foundation in 2019 alone. These totaled nearly $10 million.

Researching this funding, you ultimately come to the conclusion that the entire vaccine and in fact the entire infectious disease sector of the entire global medical industrial complex is effectively controlled by Bill Gates. Understanding that fact makes it a whole lot easier to understand how exactly this could all be hoaxed.

Imperial College London, the group that initially claimed that the coronavirus existed and was a major threat to the world, is also among the biggest receivers of Gates’ money.

Alongside that, he effectively built the vaccine company Moderna, providing them with $20 million in startup capital when they were first getting started.

Sources for the article include:

How Fauci killed thousands of people with AZT:

Flash forward: August 17, 1989. Newspapers across America banner-headlined that AZT had been “proven to be effective in HIV antibody-positive, asymptomatic, and early ARC patients,” even though one of the panel’s main concerns was that the drug should only be used in a last-case scenario for critically-ill AIDS patients, due to the drug’s extreme toxicity. Dr. Anthony Fauci, head of the National Institutes of Health (NIH), was now pushing to expand prescription.

See also  A Muslim shampoo commercial that raises some questions...

“You are responsible for all government funded AIDS treatment research. In
the name of right, you make decisions that cost the lives of others. I call
the decisions you are making acts of murder.”
Larry Kramer
“An Open Letter to Dr. Anthony Fauci”
San Francisco Examiner, June 26, 1988

Fauci Is Tight with Bill Gates

“He’s very good about not overpromising,” Gates said of Fauci in 2018 as Gates worked on a universal flu vaccine. NIAID Council minutes from 2019 show Fauci’s agency identifying a Gates Foundation workshop as being of interest. Gates met with Fauci in 2017 “to discuss research opportunities in global health.” In 2010, Fauci was named to the Leadership Council of the “Decade of Vaccines” Collaboration, which the World Health Organization, Fauci’s agency NIAID, UNICEF, and the Bill and Melinda Gates Foundation convened.

Fauci delivered a keynote opening address on “The Challenge of Pandemic Preparedness” in Washington, D.C. at the October 2, 2017 Grand Challenges meeting, which is a project of the Bill and Melinda Gates Foundation.

Fauci hung out with Gates in 2018 at an NIH workshop:

Gates Admitted That He Stopped President Trump’s Planned Vaccine Safety Commission With Robert Kennedy Jr. in the Early Days of the Trump Administration

March 2017@RealDonaldTrump confronted Bill Gates on the safety of vaccines when he was considering a safety commission headed by @RobertKennedyJr to look into the ill effects of vaccines.