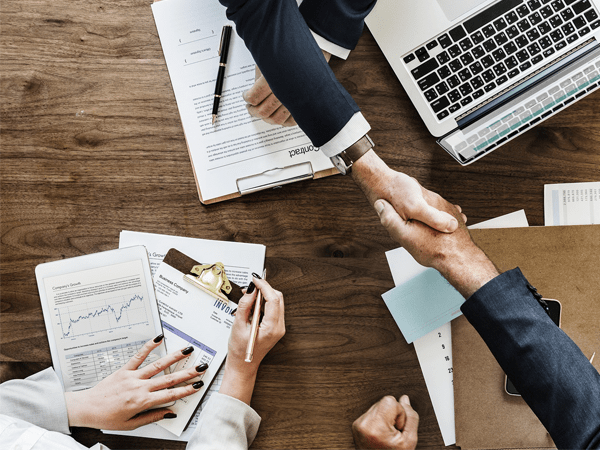 There are lessons from the 2008-09 recession that the banking industry should have taken note of to prevent egregious lending errors from happening again.

But it looks like those lessons were ignored, and history may naively repeat itself.

This time, the alarms are sounding because of $1 trillion in the corporate leverage loan market, according to Tiana Lowe at Washington Examiner:

Cov-lite loans, which eviscerate most of those standards, now comprise 77 percent of the corporate loan market, which in turn is valued at $1 trillion. That’s more than 5 percent of our GDP.

While there isn’t a precise criteria for these loans, according to Investopediathey are defined for both corporations and individuals as:

… a type of loan that is extended to companies or individuals that already have considerable amounts of debt and/or a poor credit history. Lenders consider leveraged loans to carry a higher risk of default, and as a result a leveraged loan is more costly to the borrower.

Even more alarming, investors in this type of loan appear to be unloading their investments in droves. This is in part because of fears driven by two reasons highlighted in a CNBC piece (text separation ours):

1. Former Federal Reserve Chair Janet Yellen, for instance, said in December that the leveraged loan industry, which now boasts around $1.3 trillion in assets, is one area where risk-taking could exacerbate an economic downturn.

2. Moody’s Investors Service, which rates the debt, said covenant quality, or the protection banks and investors get for the loans, has reached historic lows.

And over at the Los Angeles Times, a recent report contained a chart that confirms the growing amount of risky corporate debt, including leveraged loans: 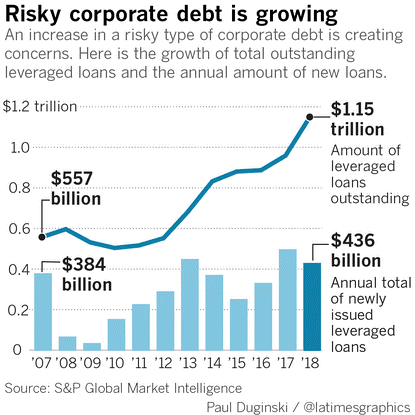 What’s telling from the chart above are the $557 billion of outstanding loans in 2007 compared to the $1.15 trillion now.

If all this high-risk corporate loan activity has a familiar “feel” to the subprime mortgage loans made to individuals in 2008, you would be right.

The years leading up to the 2008-09 recession were loaded with “simple interest” loans made to people in the subprime market. But when that credit bubble burst, it set off a firestorm that led to bail outs, new financial policy and panic.

A Los Angeles Times article drew an interesting similarity between the recession and investors leaving the leveraged loans market:

If this all sounds like the subprime housing market in the boom years before the 2008 financial crisis, you’re right. And that’s what increasingly has regulators, lawmakers, ratings agencies and some market watchers worried.

Except this time, the borrowers aren’t individuals with $250,000 mortgages though. According to the same Los Angeles Times piece, it’s corporations like Uber and Burger King taking out leveraged loans and taking on millions in debt load. Debt load that can crush a company and force it into bankruptcy.

Another CNBC article analyzed the debt load, while highlighting the similarity between the 2008 recession and what’s happening now:

The comparison to the infamous practice of securitizing large amounts of subprime mortgage loans into bundles may spook some investors who recall the consequences of the housing crisis between 2007 and 2010. Corporate indebtedness has ballooned in recent years, with companies now carrying a $9.1 trillion debt load compared to just $4.9 trillion in 2007.

Former Federal Reserve Chair Janet Yellen was quoted in that article voicing concerns of her own about how “weak” the debt underwriting was:

I think a lot of the underwriting of that debt is weak. I think investors hold it in packages like the subprime packages… the same thing has happened. It’s called CLOs, or collateralized loan obligations…

This “weakly” underwritten debt has to be paid at some point. When the tab is due, if interest rates rise at any point in 2019, that could certainly prolong a headache, and there’s already a good possibility that two rate hikes are coming.

See also  Will it be austerity again for the UK?

If a recession hits this year, debt load like this could potentially cause bankruptcies to soar, and make the recession last much longer. This type of debt already claimed Toys R’ Us as a victim of bankruptcy.

Not good, and certainly not the sign of a “strong economy.”

Don’t Let the Next Recession Leverage Your Retirement

All it’s going to take for trouble to arise is inflation to rise out of control and reduce the ability for these corporations to pay back their debt, and there is quite a big tab to pay.

Plus, the Fed isn’t giving a clear signal as to whether or not it will continue to hike rates this year. So it looks as though the market may be propped up by companies that are in massive amounts of “junk” debt.

That, and the recent recession showed us that housing market optimism was pushed until it was too late. Lessons from that period sure don’t seem like they were learned.