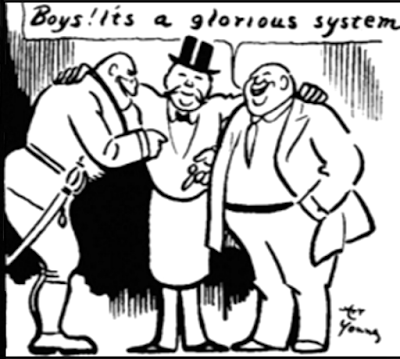 “But the impotence one feels today— an impotence we should never consider permanent— does not excuse one from remaining true to oneself, nor does it excuse capitulation to the enemy, what ever mask he may wear.  Not the one facing us across the frontier or the battle lines, which is not so much our enemy as our brothers’ enemy, but the one that calls itself our protector and makes us its slaves.  The worst betrayal will always be to subordinate ourselves to this Apparatus, and to trample underfoot, in its service, all human values in ourselves and in others.”

“And in some ways, it creates this false illusion that there are people out there looking out for the interest of taxpayers, the checks and balances that are built into the system are operational, when in fact they’re not.  And what you’re going to see and what we are seeing is it’ll be a breakdown of those governmental institutions.  And you’ll see governments that continue to have policies that feed the interests of — and I don’t want to get clichéd, but the one percent or the .1 percent — to the detriment of everyone else…

If TARP saved our financial system from driving off a cliff back in 2008, absent meaningful reform, we are still driving on the same winding mountain road, but this time in a faster car… I think it’s inevitable. I mean, I don’t think how you can look at all the incentives that were in place going up to 2008 and see that in many ways they’ve only gotten worse and come to any other conclusion.”

“Written by Carmen Segarra, the petite lawyer turned bank examiner turned whistleblower turned one-woman swat team, the 340-page tome takes the reader along on her gut-wrenching workdays for an entire seven months inside one of the most powerful and corrupted watchdogs of the powerful and corrupted players on Wall Street – the Federal Reserve Bank of New York.

The days were literally gut-wrenching. Segarra reports that after months of being alternately gas-lighted and bullied at the New York Fed to whip her into the ranks of the corrupted, she had to go to a gastroenterologist and learned her stomach lining was gone.

She soldiered through her painful stomach ailments and secretly tape-recorded 46 hours of conversations between New York Fed officials and Goldman Sachs. After being fired for refusing to soften her examination opinion on Goldman Sachs, Segarra released the tapes to ProPublica and the radio program This American Life and the story went viral from there…

If the Democratic leadership of the House Financial Services Committee is smart, it will reopen the Senate’s aborted inquiry into the New York Fed’s labyrinthine conflicts of interest in supervising Wall Street and make removing that supervisory role a core component of the Democrat’s 2020 platform. Senator Bernie Sanders’ platform can certainly be expected to continue the accurate battle cry that ‘the business model of Wall Street is fraud.'”

This is a good example of both regulatory capture and the credibility trap that co-opts those who benefits from the system as it is, even if it is by turning a blind eye and saying nothing, going along to get along, taking the ‘bullet or the bribe.’

Never assume that because a person, such as media analyst or reporter, is highly paid that they are somehow beyond the temptation to violate their trust.  Quite the contrary.   They do not believe that change can come because they have anaesthetized their integrity as a matter of convenience.  And when called upon, they will support and defend and excuse the system as it is, at first by their inaction, and then by their willing cooperation.

The corruption takes a person one seemingly innocuous decision and event at a time.  their separate their fingers, one by one, until they finally let their souls slip through and fall— and they belong to the darkness of this world.  And at the end of the day, for what?   A little more money, the patina of prestige and superiority, access to power?

Who then can stand against the world, when power and money are assumed and created out of nothing, and distributed in an unjust, interconnected system of favors and services, without duty and without honor?

And so those captured in this system excuse and accept their own part in it, for their personal benefit and professional ego and advancement, that heady feeling of sophistication and acceptance by the worldly.

It’s an old story  It is so old that at times it seems as if distant, just a story from another time— a fable.   But it is real.  It is the very fundamental core of this reality.  It is thecontinuing struggle.

It is, in the end, the only thing that matters, the only triumph or personal tragedy.  It is the only consequence that you will dwell upon, when the husk is stripped bare, and you yourself face the only certainty in this world alone, and as your truly are.