WATCH | The Obama administration distributed thousands of intelligence reports with the  unredacted names of US residents during the 2016 election.

During his final year in office, President Barack Obama’s team significantly expanded efforts to search National Security Agency intercepts for information about Americans, distributing thousands of intelligence reports across government with the unredacted names of U.S. residents during the midst of a divisive 2016 presidential election.
The data, made available this week by the Office of the Director of National Intelligence, provides the clearest evidence to date of how information accidentally collected by the NSA overseas
2 of 22

about Americans was subsequently searched and disseminated after President Obama loosened privacy protections to make such sharing easier in 2011 in the name of national security. A court affirmed his order.
The revelations are particularly sensitive since the NSA is legally forbidden from directly spying on Americans and its authority to conduct warrantless searches on foreigners is up for renewal in Congress later this year. And it comes as lawmakers investigate President Trump’s own claims his privacy was violated by his predecessor during the 2016 election.
In all, government officials conducted 30,355 searches in 2016 seeking information about Americans in NSA intercept metadata, which include telephone numbers and email addresses. The activity amounted to a 27.5 percent increase over the prior year and more than triple the 9,500 such searches that occurred in 2013, the first year such data was kept.
The government in 2016 also scoured the actual contents of NSA intercepted calls and emails for 5,288 Americans, an increase of 13 percent over the prior year and a massive spike from the 198 names searched in 2013. 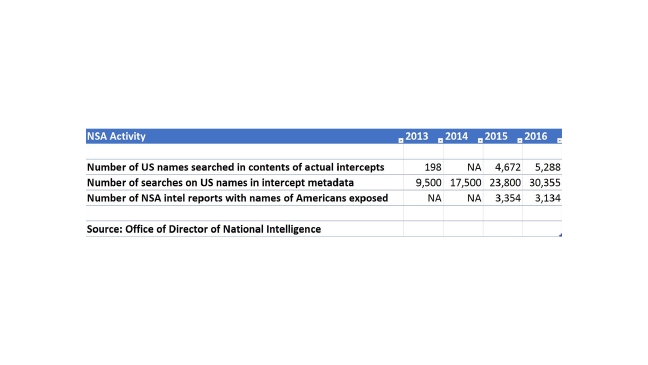 Former Obama administration National Security Adviser Susan Rice on Wednesday declined a request to testify next week before a Senate subcommittee, citing separation of powers between the executive and legislative branches and the fact that the invitation was not bipartisan.
Rice’s decision to decline the invitation to testify on Russia’s election meddling came in a letter from her lawyer, Kathryn Ruemmler, to the leaders of the Senate Judiciary Subcommittee on Crime and Terrorism, Lindsey Graham (R-S.C.) and Sheldon Whitehouse (D-R.I.).

The letter, first reported by CNN, notes that the invitation to testify came only from Graham and that Whitehouse “has informed us by letter that he did not agree to” the request, which Ruemmler calls “a significant departure from the bipartisan invitations extended to other witnesses.”
“Moreover,” Ruemmler writes, “Chairman Graham’s invitation was extended only after the hearing was noticed, less than two weeks before the hearing was scheduled to occur, and without consultation with Ambassador Rice, a professional courtesy that would customarily be extended to any witness.”

3 thoughts on “Obama Spied On Trump, His Staff, Congress, AND TRUMP SUPPORTERS. 36,000 People Were Unmasked By The NSA ALONE, And It's Technically More, Since Comey Is Refusing To Release FBI Numbers.”