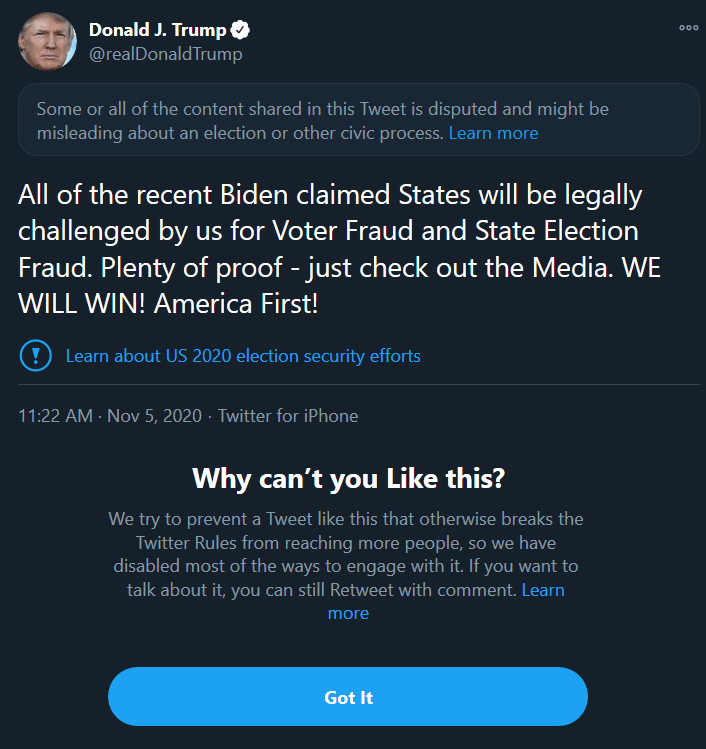 I am happy to see that President Trump is acting on the maxim of the month: don’t concede if you didn’t lose. Any other GOP president would be on the defensive now. ‘Yes, there was voter fraud, but, but, but…’ That dangerous conjunction is a fledging concession just waiting to spread its wings and fly.

Donald Trump does not trade in concessions. It’s one of the things about him that infuriates people. It’s also one of the reasons he is so effective. He abhors clutter. He seizes upon the main issue — there’s too much illegal immigration, our trade practices are unfair to American workers, the deep state has created a suffocating regulatory nightmare that benefits a tiny class of bureaucrats.

When Napoleon abdicated and the Bourbons were restored, Talleyrand cast a jaundiced eye on the royal family’s heavy-handed efforts to reassert their ancient prerogatives and acidly observed ‘They had learned nothing and forgotten nothing.’

Already we see the Deep State and NeverTrump activists panting to reinhabit the corridors of power. The lavishly funded left-wing front group known as ‘The Lincoln Project’ has smartened up its house GOP impersonators like Michael Steele to natter on about a restored Republican party that ‘could become a governing majority in the future.’ Right. As a friend observed, what the Kristol Kids Klub represent is a Potemkin party, a party with no voters, only apparatchiks.

Old GOP: "Republicans should have the good manners to have elections stolen from them with dignity."
New GOP: "There is no dignity in accepting media rigging, polling deception, and voting irregularities, particularly without a fight."

I’M TEMPTED TO ANSWER, ‘STEAL IT BACK’: What Can You Do About A Stolen Election?

JOHN DANIEL DAVIDSON: Yes, Democrats Are Trying To Steal The Election In Michigan, Wisconsin, And Pennsylvania.

It turns out, the vote dump was the result of an alleged typo, an extra zero that had been tacked onto Biden’s vote total in Shiawassee County, Michigan. It seems the error was discovered only because Davis and other Twitter users noted how insane and suspicious the vote totals looked, and demanded an investigation that uncovered what was either a typo or an incredibly clumsy attempt to boost Biden’s vote count.

There was also something suspicious about the vote reporting in Antrim County, Michigan, where Trump beat Hillary Clinton by 30 points in 2016. Initial vote totals there showed Biden ahead of Trump by 29 points, a result that can’t possibly be accurate, as plenty of journalists noted.

After the strange results caught national attention, election officials in Antrim County said they were investigating what they called “skewed” results, working with the company that provides their election software to see what went wrong. The county clerk said they plan to have an answer by Wednesday afternoon.

Then another mysterious all-Biden vote dump happened in Wisconsin. Biden miraculously overcame a 4.1-point Trump lead in the middle of the night thanks to vote dumps in which he got—you guessed it—100 percent of the votes and Trump got zero.

After complaining — wrongly — for four years that Trump was an illegitimate president, the Democrats are working furiously to illegitimately install one of their own.

BREAKING:
9.7 Million V O T E S are missing in California!
I bet they are all for Trump