Thanks to limiting animal supplies and halfhearted demand, companies including Tyson Foods Inc., the largest U.S. meat processor, and Cargill Inc. are facing plummeting profits per head of cattle they slaughter.

That’s a severe setback of fortune from last year, when the fastest expansion of the American cattle herd in four decades increased margins for packers. But, the herd growth didn’t last long. As a result, cattle futures in Chicago have rebounded 23 percent since bottoming in mid-October, while the price packers get for wholesale beef has fallen in the past year amongst stiff rivalry from chicken and pork. 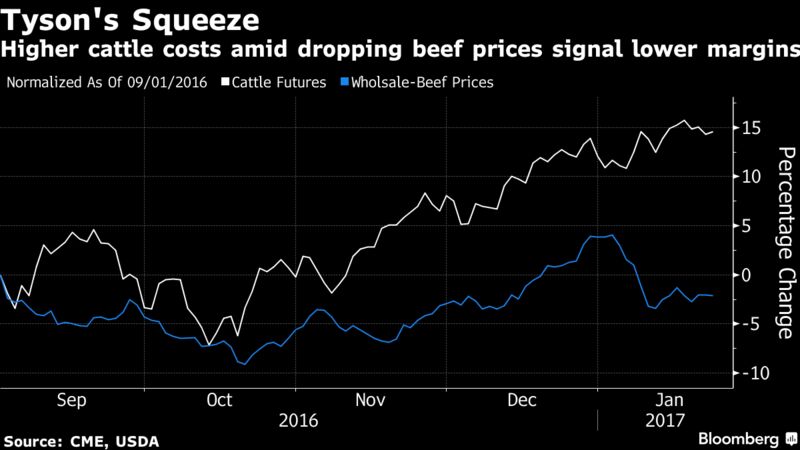 Source: goo.gl/3qjFla
Losses for U.S. beef packers expanded to $67.15 a head on Jan. 25, according to data from HedgersEdge.com. Profit per head reached an all-time peak of $147.20 on Oct. 18 and averaged $43.79 in 2016, the highest for any year in records going back to 1990.
The margin reversal may be a blow to Springdale, Arkansas-based Tyson. In fiscal 2016, its beef segment rebounded to an operating profit of $347 million from a loss of $66 million a year earlier, with former Chief Executive Officer Donnie Smith calling it “a great turnaround story,” according to a statement on Nov. 21. The company’s shares have jumped 22 percent in 12 months, closing at $62.63 on Wednesday. But, it doesn’t look like the beef turnaround is certain to last. 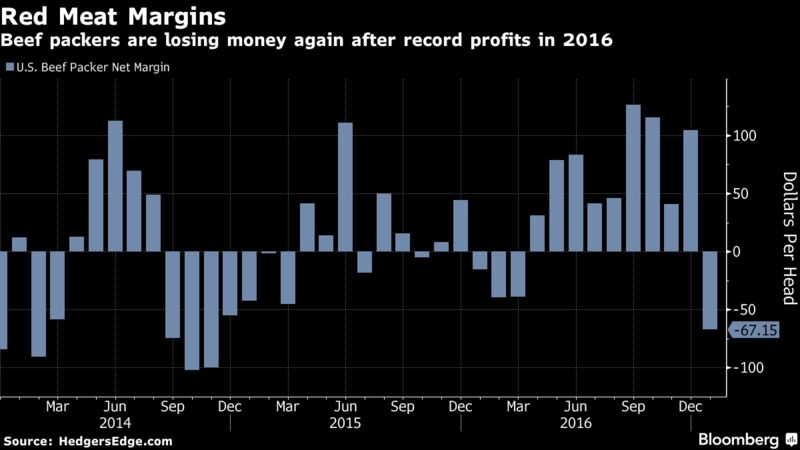 Source: goo.gl/3qjFla
“When you have more meat available, unless you’ve got strong growth in demand, that product is going to be consumed at a lower price,” said John Nalivka, the president of Sterling Marketing Inc., an industry consulting firm in Vale, Oregon. “People simply do not eat as much beef as they used to.”
As lower wholesale-beef prices compress profits for packers, consumers aren’t seeing all the savings. The spread between wholesale and retail prices was $2.63 a pound in December compared with $1.62 in December 2005. Analysts have lowered their consensus one-year target price for Tyson’s stock by 1.1 percent in the last month, data compiled by Bloomberg show. Heather Jones, a Richmond, Virginia-based analyst for Vertical Group, cut her rating on the shares to hold from buy in a report on Wednesday, citing a “rough start” for beef this year.