RUSH: I just learned something about Democrat “witness,” and I put that in quotes, Pam Karlan, Pamela Karlan. She is the Stanford law professor who’s been testifying about what a reprobate Donald Trump is. “He abused his power!” All of this rotgut, partisan hackery. Well, it turns out that this witness donated thousands of dollars to Hillary Clinton and was on Hillary Clinton’s short list of Supreme Court nominees.

And then it all went up in smoke when Hillary couldn’t even run a campaign, couldn’t even draw flies to book signings or campaign stops, couldn’t even deign to go out into these states where some “deplorables” live. No wonder she’s unhinged. No wonder she’s ticked off. I wouldn’t be surprised if this woman wore one of those vagina hats in protest after Trump won. Remember that, when Trump announces a travel ban and so forth and all these vagina-hat women start showing up all over?

I wouldn’t be a bit surprised if she’s one of them. She donated thousands of dollars to Democrats, was on Hillary Clinton’s list for a potential Supreme Court nomination. So is it any surprise that this babe has a vendetta? They all have a vendetta against Trump! But again, I’m telling you, Turley? Turley’s one voice, I think, was able to illustrate and put in context the lunacy of all of these so-called legal scholars.

RUSH: I got sound bites of all these people (sigh), and you really need to see them, too. The arrogance and the superiority these people have just drips off of them. I don’t know what it is. Is it arrogance? It’s also condescension. This babe, Karlan, pulled a Pencil Neck. She even made up a story about Trump denying the Louisiana governor disaster relief. Grab sound bite number eight.

READ  Ontario barbershop reopens using a loophole! turns place into a audition studio! No Mask required! Talent does not need one to film!

Remember what this is. This is an impeachment hearing. Trump’s abused his power. No, Trump committed bribery! Oh, no! They dropped the bribery. There isn’t any bribery. That didn’t focus group well. So now he’s abused his power. The New York Times is coordinating: Trump has abused his power! It’s all these people are saying, and here’s Stanford law professor Pamela Karlan testifying as part of her opening remarks.

KARLAN: (shouting) Imagine living in a part of Louisiana or Texas that’s prone to devastating hurricanes and flooding. What would you think if you lived there and your governor asked for a meeting with the president to discuss getting disaster aid that Congress has provided for? What would you think if that president says, “I would like to do you… I would like you to do us a favor. I’ll meet with you and I’ll send disaster relief once you brand my opponent a criminal.” Wouldn’t you know in your gut that such a president had abused his office, that he betrayed the national interest? 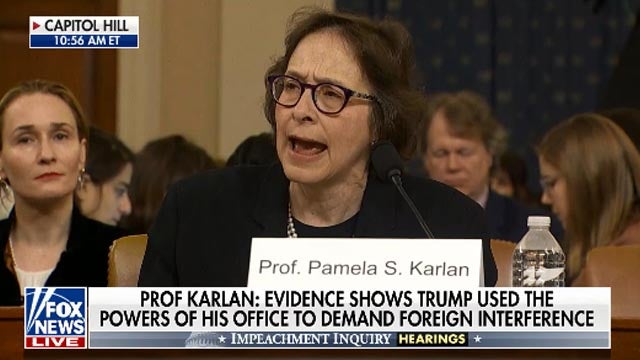 RUSH: Stop the tape! It didn’t happen. That’s why I was so livid watching. This did not happen. She is building off the same technique that Adam Schiff used. Adam Schiff lied about the call between Trump and Zelensky while he was sitting in his committee chair. The actual chair. The committee was in session, and Adam Schiff said that the president told the president of Ukraine to “dig up — make up, if you have to — dirt on my opponent.

“He told him seven or eight times, ‘Make it up, dig it up, and don’t get back to me until you’ve found it. Now I’m gonna send my guy over there, Rudy. You’ll like him. Let him help you. But don’t get back to me ’til you’ve found and made up that dirt on my opponent.’” That’s what Schiff said, and it was a total lie, because Trump had released the transcript. Nothing even close to that happened — I mean, not even close. Schiff totally made it up.

And he was called out on it, and he then said, “Well, I was doing parody to try to make the point. I was trying to, you know, lighten the proceedings.” It wasn’t funny, and he got away with it for 30 minutes before a single Republican called him out on it. I’m blowing a gasket watching it on TV, and there’s not a single Republican who objected to it, and here comes this babe making up another story based on that lie. “Imagine you live in Louisiana and you need some hurricane relief, and the president says, ‘I’m not gonna send it to you until you dig up dirt.’”

None of this ever happened!

These are law professors. These are the most brilliant among us. These are the best and the brightest. These are people teaching students about the law. She’s an abject faker and liar, because she’s a partisan hack who has been poisoned with abject hatred. She’s a donor to the Democrats, a donor to Clinton, and she was on Hillary’s short list for a Supreme Court nomination if Hillary had won. So she’s understandably ticked off and hates Trump because he wouldn’t…

This is made up!