What is abundantly clear to me — and as I say there’s a whole heck of a lot that’s abundantly clear. But the stronger, the more obvious it is that the evidence about Obamagate, the evidence that the Obama administration ran a coup against the Trump campaign and then the Trump transition and the Trump presidency, and that is still ongoing, do not think that it’s over. This coup to oust Donald Trump is ongoing. And the stronger the evidence for it, meaning the more obvious it becomes to everybody — now, you and I, we’ve been aware of what’s going on here for four years. You and I have been aware of what’s going since the Trump campaign. We’ve known how bogus it all was. 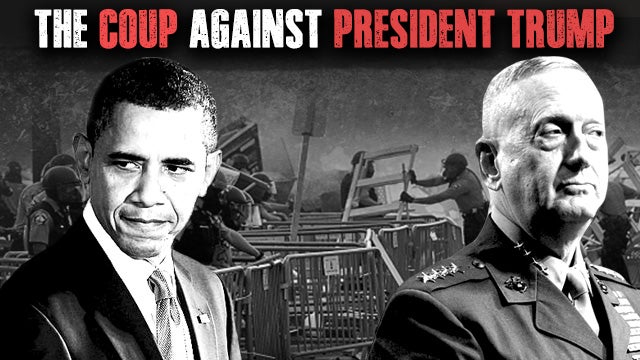 But you have to stop and remember, folks, that there’s a heck of a lot of the American population that is not anywhere near up to speed like you and I. It’s a shame, but they’re not. It’s still a fact that there’s decent size percentage of the population that only knows what they see on things like CNN or their local news or MSNBC or what they read in their newspaper. It doesn’t matter the New York Times, the Los Angeles Times, USA Today, the Washington Post, it’s all one, it’s all the same stuff.

It’s all anti-Trump. It is all pro-ousting Trump, getting rid of Trump. It’s all lies, all of it, every bit of it is lies. But now as more and more evidence is forthcoming and the stronger that evidence and, therefore, the more persuasive it is to more and more people, the greater the Democrat media freak-out is. It’s like the impeachment idea, driving a president’s ratings into the low thirties. Remember, this has always been the objective. The objective has been to separate Trump voters from Trump.

And you have to remember that polling data is used to shape public opinion, not reflect it. It’s used to create the conventional wisdom. And everybody wants to be in the conventional wisdom category. Everybody wants to be in the majority. So if you can be made to think that everybody hates Trump then it’s easy for you to hate Trump. If you can be convinced that everybody wants Trump gone, that that’s the sensible position to have, if the reasonable, intelligent position to have is Trump’s a joke, gotta go, then it’s easier to corral people into that position. And I’m talking about masses of people, you know, the great unwashed.

So they’ve been try to get Trump’s numbers into the thirties. It’s the only way they have of actually being able to overturn the election results. If the Democrats can politically cripple Trump now, then they may be able to survive — this is their thinking — they may be able to survive a flood of indictments, ugly facts, and what is gonna end up being good economic news. I do believe the economy is gonna recover ’cause what else can it do? I think Las Vegas is gonna be an indication of that.

This was not tolerable. This simply could not be allowed to stand. Whatever it took to reverse that had to happen. And now after the coronavirus lockdown, which more and more people now realize was totally unnecessary. If you doubt me, grab audio sound bite number 1. Here they are at CNN this morning discussing it.

JIM SCIUTTO: Given the vastly different infection rates that we saw between, say, New York and New Jersey and other states, Missouri, even Florida, is it too early to say, I mean, is it, is it possible to make the argument that the nationwide stay-at-home order was too comprehensive, too far reaching, it could have been tailored more geographically to certain age groups? 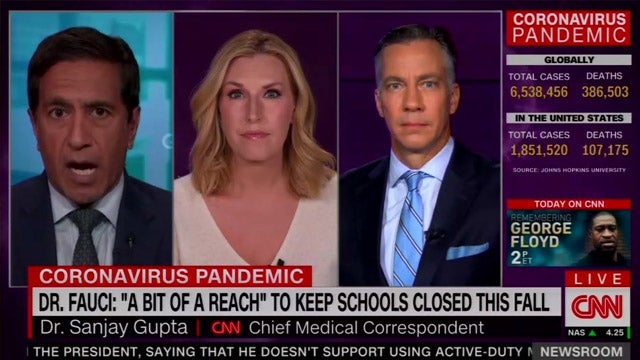 RUSH: That’s Sanjay Gupta, the official doctor at CNN. (impression) “Yeah, yeah, I think so. Perhaps.” Jim Sciutto is leading the discussion. So now here they are — with a straight face — asking was the national stay-at-home order too severe. They ran it at CNN! They promoted it at CNN. They were all for it at CNN.

Now they’re asking, “Maybe was it too severe?”

Well, let me help you out.

There was no reason to ever put 40 million Americans out of work unless it was to your political advantage to have that happen. It was never important enough to wipe out who knows how many livelihoods and lives and businesses. It was never necessary. It was all predicated on lies, fake and incorrect computer model projections that were never accurate.

But how do we go back and get all that back? We don’t. They, the euphemistic “they,” had a great opportunity to wipe out the three years of Trump’s economic revival — and what’s it been replaced by? Well, take a look! I mean, all you have to do is watch the news every afternoon and night. That’s what it’s been replaced by.

And they know that every day they don’t release the results is another day closer to the election that they will be released. This is why James Mattis writes his piece in The Atlantic. This is why Mike Mullen, the former chairman of the “Chief Joint of Staff” wrote his piece…where? In The Atlantic! They are freaking out. (interruption) No, no, no. 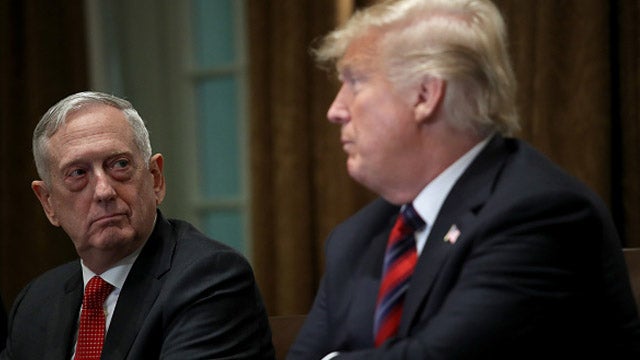 I’m not sure Mattis had anything to do with the coup. No, no, no. But Mattis is the establishment in New York and in Washington. He represents the opposition to Donald Trump. He’s made it clear. It’s so obvious to me. If you read Mattis’ piece, his op-ed in The Atlantic — and even if you listen to Esper, the current secretary of defense — they don’t think this rioting’s any big deal at all.

That has been one of the hallmark identifiers of the Never Trumps and of the Democrats and of the, quote-unquote, “deep state,” the establishment. They’ve just never thought that the country is anywhere near a crisis, and this has always been one of the great disconnects between you and them, because you have. You have not only thought it, you have known the country was in crisis.

It didn’t matter to them.

They didn’t think it’s a crisis. By the same token, all of this destruction — the rioting, the looting, the mayhem — it’s just not a big deal. Mattis says, “We must not be distracted by a small number of lawbreakers. The protests are defined by tens of thousands of people of conscience who are insisting that we live up to our values, our values as people and our values as a nation.”

So he’s siding with the lawbreakers!

Not only is it not that big a deal because there aren’t that many of them, but they’re the ones who have virtue. And it’s Donald Trump who is threatening the Constitution? Have you heard this talk out of Los Angeles? There are two conflicting numbers here, but the Los Angeles city council and the mayor are talking about “defunding the police” to the tune of either $150 million or $250 million.

Now this is a movement — part of the rioting, looting protest movement, the Black Lives Matter movement — to defund the police nationwide. Defund…? So for all of the other reasons to leave California, there’s a brand-new one. That aren’t gonna be any cops. Not only is Donald Trump pose a great threat to the Constitution, so do the police.

I’m gonna tell you, you start defunding the police — meaning there’s no money for a police force, there certainly isn’t any money for police force as you’ve come to know them, no regular patrols — and you call 911, who knows? They may not have the money to respond. Guess what’s gonna happen? Hello, guns. Hello, gun stores. Hello, gun purchases.

Hello, any number of ways that people are going to invest in to protect themselves. But these people like the mayor in Los Angeles, he’s actually promoting this like he’s a great guy, like this is a brilliant thing, like he is in possession of unparalleled compassion and understanding. He is gonna defund the cops. The protests are no big deal, says James Mattis. 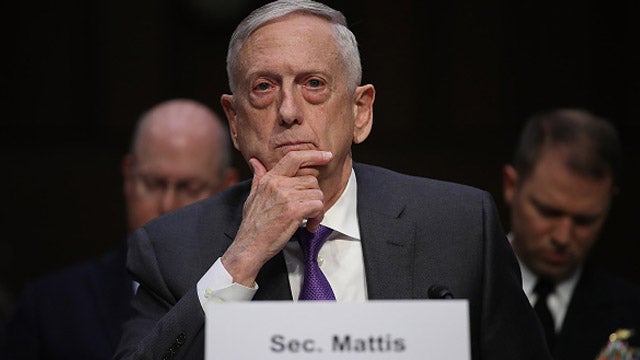 You know who’s out of touch? Here’s Mattis… You know, this refrain in Mattis’ piece (impression), “I don’t even see Donald Trump trying to unite the country. Presidents are supposed to try to unite the country. You know what? I don’t even see President Trump trying.” How blind must you be? James Mattis, “Mad Dog Mattis” (that’s his nickname), served as the secretary of defense in Trump’s administration.

Did he not see what has been done and attempted against Trump for these past four years? Did he not see the fake, phony coup? Was he not aware that every day the American media was promoting one lie after another — accusing Trump of traitorism, of treason, of being a Russian spy and an agent, a personal asset of Vladimir Putin?

It is to defeat the forces that are arrayed against us out there that are attempting to overthrow the Trump administration and continue this coup and to rip to shreds the Constitution. We are in a battle for the future of America, as founded. There’s always gonna be an America. What kind it’s gonna be is the question. Unify? With who? Unify with what?

And then what you have then is not unity; you have defeat. How can these guys not see this? How can James Mattis, how can Mike Esper…? Well, because they must be committed deep-staters who don’t think any of this is ever gonna touch them. It’s never gonna affect them. They’re never gonna lose anything they’ve got.