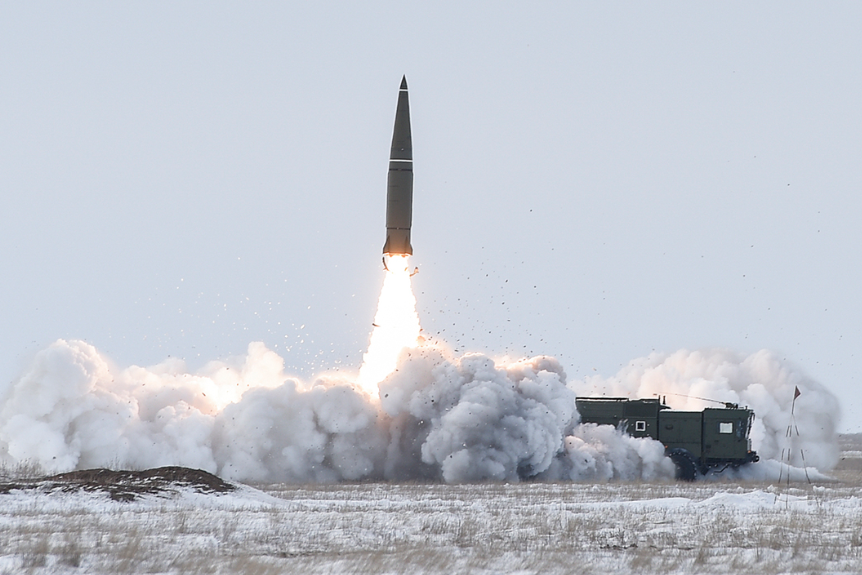 How close can Russia and Ukraine come to war without actually going over the precipice?  Over the weekend, more forces on both sides continued to pour into the conflict zone.  And on the line of separation in eastern Ukraine, there are regular reports of gunfire and shelling.  At this point, there are no negotiations on the horizon, and one false move could easily spark an all-out war.  In fact, a Kremlin spokesperson is warning that we could soon see “full-scale combat operations”…

As Kiev warned it could be ‘provoked’ by Russia’s aggression, several Western nations have voiced fears that Russian President Vladimir Putin’s move could trigger an all-out war, which could drag Nato allies, including Britain, into the conflict.

By rushing so many forces to the conflict zone, the Russians have prepared themselves to be ready for any scenario that may unfold.

According to one British news source, Russia now has “close to 100,000 troops” in the region…

The Russia-Ukraine crisis could explode into all-out war within days after Moscow amassed close to 100,000 troops at the flashpoint border, it was feared last night.

Senior Ukraine military sources fear Moscow’s war-planners may have wrong-footed Kiev by being far more battle-ready for a major land and sea attack than previously suspected.

If a full-blown war does break out, the Ukrainian military will be no match for the Russian military.

The Ukrainians would literally beg NATO for help, and Joe Biden has already promised “unwavering support” for the regime in Kiev.

Since the end of the Cold War, the U.S. and Russia have never been closer to war than they are right now, and that is why this crisis is far more important than most Americans realize.

Within the last 24 hours, there has been quite a bit more activity along the line of separation.  The following is an English translation of a report that was posted on the official website of the Ukrainian military…

During the past 24 hours, on April 10, in the area of ​​the Joint Forces operation, the armed forces of the Russian Federation violated the ceasefire 10 times, including 9 shellings of Ukrainian defenders and 1 flight of an enemy UAV crossing the line of demarcation.

In particular, in the area of ​​responsibility of the operational and tactical group “East”, the Russian occupation forces fired at our positions near the village of PYSCHEVYK with 82 mm mortars, anti-tank and hand-held anti-tank grenade launchers prohibited by the Minsk agreements. In the suburbs of the villages of PISKY and SHYROKYNE, the enemy opened fire with small arms, and near AVDIYIVKA and KAMYANKA – with grenade launchers of various systems.

In the area of ​​responsibility of the operational and tactical group “North”, near the village of MAYORSKE, armed formations of the Russian Federation fired at the positions of Ukrainian defenders with hand-held anti-tank and grenade launchers.

Near the village of ZOLOTE-3, the enemy opened fire with automatic machine grenade launchers, large-caliber machine guns and small arms.

Of course the Ukrainians don’t always disclose when they fire upon forces on the other side, and that has been happening on numerous occasions as well.

See also  If This Happens, I Pray You’re Prepared! Russia & US Heat Up For WW3! Here's What You’re Not Told!

This sort of low level fighting is only a concern because it could potentially lead to a much larger conflict.

And in preparation for such a conflict, the Russians have been moving some very serious hardware into the region.

For example, it is being reported that the Russians have moved at least six “city destroyers” into the conflict zone…

Even more importantly, we are being told that the Russians have been deploying Iskander missile systems close to Ukraine…

Thomas Bullock posted a Janes article from 8 April that said he identified the deployment of Iskander short-range ballistic missile systems, likely belonging to the 119 Missile Brigade, to Voronezh from the Sverdlovsk region.

This is a sign that the Russians are definitely not messing around.

Iskander missile systems can be used to deliver conventional payloads, but they are also designed to carry nuclear warheads…

Russian official sources claim that the R-500 missile carries a conventional 500 kg warhead or nuclear warhead with a yield of around 10-50 kT. It is likely that there are several different conventional warheads, including cluster, fuel-air explosive, and bunker-busting. The missile can overcome enemy air defense systems while offering high-probability of failure-free operation in countermeasures environments. It has a target accuracy of 5m to 7m and operates even in fog or low visibility.

If push came to shove, the Russians would not hesitate to use tactical nukes if they felt it was necessary.

We should all carefully monitor the situation in Ukraine, because this really does have the potential to spark World War 3.

Of course there are two other potential conflicts that could also cause global war to erupt.

China has been eyeing a potential invasion of Taiwan for quite some time now.  If China decides to actually pull the trigger, the U.S. and China would immediately be at a state of war.

Also, it appears to be just a matter of time before Israel and Iran go to war.  On Sunday, Iranian officials announced that the Natanz nuclear facility “was hit by a ‘terrorist” attack”…

Iran’s Natanz nuclear facility was hit by a “terrorist” attack on Sunday, the country’s nuclear chief said, hours after reports of an electrical “accident” – and a day after new uranium enrichment centrifuges were started up.

Iran reserves the right to “take action” against those behind the incident at the Islamic Republic’s nuclear facility in Natanz, the head of the nation’s Atomic Energy Organization, Ali Akbar Salehi, told state TV on Sunday.

He called the incident at the plant an act of “nuclear terrorism.”

Iran’s nuclear program has been steadily moving forward, and Israel had made it abundantly clear that it will never allow the Iranians to develop their own nuclear weapons.

The clock is ticking, and there will be war at some point.

So which flashpoint will erupt first?

I don’t know, but the red horse is getting ready to ride, and things could start to spiral out of control at any time.

I believe that we will be the generation that will experience World War 3, and it truly will be too horrible for words.