OPEC has been the most important actor in global oil markets with the ability to influence prices for decades. The shale revolution in the U.S. has brought much uncertainty for traditional producers due to the vast amounts of oil and gas that are flowing from the American energy heartland in a short period. The looming threat is so big, that erstwhile competitor Russia agreed to align its policies with the cartel’s. Moscow, however, is eager to squeeze all it can from the agreement, leaving little for Saudi Arabia in particular who risks losing much more due to the particular phase of the country’s economic development.

Over the years, (geo)political and economic developments have transformed the power balance between the organization’s members. One factor, however, that determines influence more than any other is production capacity. In this context, Saudi Arabia has been the undisputed king for decades.

The level of professionalization of national oil company Saudi Aramco has made it into a formidable energy behemoth that controls the world’s second-largest conventional oil reserves. While Venezuela’s reserves are bigger, Aramco’s low production costs, continued Western (and in particular U.S.) political support, and relative political stability have gradually increased and maintained OPEC’s largest production capacity.

Influence, however, is not only derived from how much one can produce but more specifically from how much one chooses not to produce. Spare capacity is the defining factor behind leverage over price development. In this area, none is bigger than Saudi Arabia’s. The geography and type of wells make it possible for Aramco to ramp up and bring down production relatively quickly. On average, the Arab country has usually kept 1.5 – 2 million barrels per day (mbpd) of spare capacity on hand, which is 1.5 – 2 percent of global oil demand before the Covid-19 pandemic.Related: Will U.S. Shale Finally Reward Shareholders? 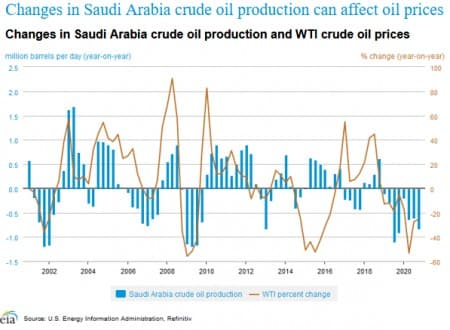 The unprecedented threat of the U.S. shale industry drove Moscow and Riyadh into each other’s arms in 2016. The first time an agreement was struck, the participants agreed to cut production by 1.8 mbpd (1.2 from OPEC and 600,000 from non-OPEC). Despite some friction and disagreements, the OPEC+ format has survived for years.

However, the disparity in interests and share of dependence on oil revenues is a continuous source of instability. According to Ronald Smith, a Moscow-based analyst at BCS GM, “as long as oil is $45/bl or below, it is pretty easy to get everyone in OPEC+ on the same page and cut production. And when it is $65-70/bl, everyone agrees it is time to put oil back on the market. But between $50/bl and $60/bl, that is where the interests diverge.”

The price of oil currently is hovering around $55, which means that Riyadh finds the alliance with Russia more important than the other way around. The IMF estimated that Saudi Arabia’s fiscal breakeven oil price for 2021 is at $68/bl. Russia, in contrast, is $46/bl. Furthermore, a larger share of the Saudi production is exported while Russians consume more of their produce domestically. Also, the economy of the latter is more diversified which gives it another trump in its negotiations with Riyadh.

Another advantage in the hands of Russian producers and the Kremlin is the weak ruble while the riyal in Saudi Arabia is fixed against the U.S. dollar. Oil is traded internationally in dollars meaning the export from Russia earns producers a handsome fee when exchanged into roubles. Saudi Arabia does not enjoy the same benefit and won’t any time soon either.

The low production costs in the Arab country give it an advantage over competitors such as shale producers in the U.S. Riyadh expects demand for oil to return later this year when vaccination against Covid-19 kicks-in. Therefore, policymakers in the Kingdom think they’ll claw back customers when oil becomes more scarce.

Recently, Saudi Crown Prince Mohammed bin Salman announced that Aramco may offer additional shares to the market in the next dew few years. This shows the necessity for Riyadh to voluntarily lower production by 1 mbpd while Russia will increase by 130,000 bpd. Saudi Arabia is in a rush to modernize and diversify the economy by earning much-needed petrodollars while it still can.