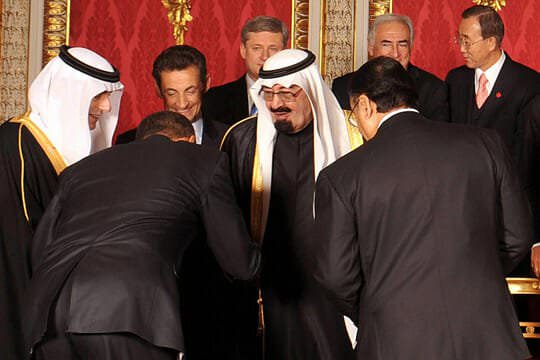 In his memoir The World As It Is, published on Tuesday, Rhodes recounts a trip to Saudi Arabia in June 2009 soon after Barack Obama became president.

He says on arrival he and other US officials were taken to housing units in a compound owned by the monarchy in the desert.

“When I opened the door to my unit, I found a large suitcase,” Rhodes recounts.

The trip to Saudi Arabia was the beginning of Obama’s first tour of the Middle East as President and preceded his famous Cairo speech which he intended as a message to the Muslim world.

Rhodes says at first he thought the bagged treasure was a bribe, to influence him as he wrote Obama’s speech.

However, he soon learned he was not the only member of the delegation to be lavished with such expense.

The State Department’s register notes the Saudis gave Rhodes “one pair of silver cufflinks, one male watch, one female watch, one silver pen, and one diamond jewelry set including earrings, a ring, and a bracelet, presented in a green leather case”.

It justifies the acceptance of such gifts by saying “non-acceptance would cause embarrassment to [the] donor and US government”.

The then Saudi king, Abdullah, gave the Obamas and their daughters almost $190,000 worth of gifts.

A diamond and ruby jewelry set given to Michelle Obama was valued at $132,000 alone.
No wonder Ben Rhodes was crying after Hillary lost the election. It will be a very long time before another Democrat gets a suitcase filled with jewelry from the Saudi’s.
www.thegatewaypundit.com/2018/06/this-explains-the-deep-bow-to-the-king-saudis-gave-obama-and-his-aides-suitcases-of-jewels-before-muslim-apology-tour/
www.state.gov/documents/organization/154926.pdf