Royal Dutch Shell reported a steep drop in earnings in the fourth quarter, and the financial squeeze may slow the pace of share buybacks and force more asset sales.

Shell’s earnings of $2.9 billion were down by half from a year earlier, leading to a 3 percent drop in its share price on Thursday morning.

After the takeover of BG Group several years ago, the Anglo-Dutch company is now just as much a natural gas major as it is an oil major, so the global gas glut is hitting the company hard. Shell is one of the largest LNG exporters in the world. LNG prices in Asia are at a 10-year low and showing very little signs of life.

Meanwhile, chemical and refining margins have also narrowed. The oil majors are overbuilding chemical capacity, and are now reeling from the deterioration in that segment. “Chemicals are really at the floor,” Shell’s CEO Ben Van Beurden said.

Shell said that it will slow the pace of its $25 billion share buyback program as both crude oil and natural gas prices have fallen sharply. “All macroeconomic indicators are working against us,” van Beurden said after reporting earnings on Thursday. “It is essential to have a resilient balance sheet to manage the kind of volatility we are seeing at the moment,” he said, according to the FT.

Shell had previously announced plans to sell off $10 billion in assets between 2019 and 2020, but van Beurden said the total could climb to $13 billion. “How that pans out depends a little bit on the pace at which we can close deals, and we will be driven by an economic rationale, rather than a desire to have early cash,” he said.

Meanwhile, Shell’s debt has also increased. Its gearing ratio – the ratio of debt to total capital – rose to over 29 percent in the fourth quarter, up from 28 percent in the third quarter.

Shell also wrote down $2.24 billion due to low natural gas prices, an impairment that was revealed in December. The company had previously said that it needed Brent prices to trade above $65 per barrel in 2019 and $66 per barrel in 2020 in order for it to keep its debt levels in check.

Shell’s share price is trading at its lowest point in two years, and it has vastly underperformed the S&P 500 in recent years.

In short, the results are not great. But, it could be worse – ExxonMobil’s share price is at a 10-year low. 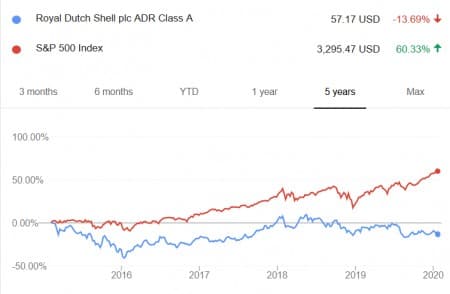 The near-term is not promising for the oil majors. Crude prices are at multi-month lows and demand forecasts for the year could be revised down due to the unknown hit to consumption from the coronavirus in China.

Analysts still differ on the significance of the outbreak. The number of cases of the coronavirus are larger, so we will “doubtlessly see a dent in oil demand (growth) despite the virus’ lower lethality,” JBC Energy said in a note. “Each day the virus spreads weakens Chinese economic growth, following an already pressured last year.” But Beijing could turn to more stimulus, which could lead to a rebound, JBC said.

For its part, Raymond James wondered about why the market was so focused on China when the supply impact in Libya is vastly more substantial. At the moment, the LNA in Libya has disrupted around 1 million barrels per day (mb/d) of exports. “[E]veryone seems to be fixating on demand-related headlines while ignoring the supply side of the equation. Thus, fears about Chinese oil demand are totally overshadowing the fact that Libya’s oil exports are essentially shut down, as well as an apparent Houthi attack against Saudi,” Raymond James wrote in a note.

Justified or not, the oil market has soured and OPEC+ is facing questions about what it is going to do in response to Brent falling back below $60 per barrel.

For the oil majors reporting bad fourth quarter numbers, the start of 2020 is not offering any relief.

By Nick Cunningham of Oilprice.com