China could soon embark on a global buying spree following the coronavirus-induced economic crisis and the re-opening of its economy, and the U.S. shale patch is an obvious target thanks to unprecedented demand destruction, ultra-low energy prices, and catastrophic debt levels that have left hundreds of IOCs on the verge of bankruptcy.

And now, some officials fear that a Chinese takeover of the battered sector is looming, which poses a national security risk.

Wayne Christian, commissioner of the Texas Railroad Commission, has told Fox Business that allowing hostile nations to swoop in and purchase distressed properties in Texas and elsewhere in the shale patch is a serious national security concern.

Is A Chinese Takeover Threat Real?

But more importantly, it put the country firmly on the path to energy independence, an energy utopia the country has struggled to attain for decades.

The ongoing crisis has severely depressed energy asset values, with oilfield prices having declined from an average price of $42,000 per net flowing barrel per day when oil prices were around $60/barrel to under $20,000 currently.

Shut-in fields are fetching even less, with a closed well commanding only half the price for a virtually identical field but with oil still flowing.

This makes U.S. shale assets a prime target for bargain-hunters, with Chris Atherton, president of EnergyNet, recently telling Forbes that his company has thousands of registered users with plenty of dry powder waiting to pounce.

READ  Robert F. Kennedy Jr: The Big Question About COVID Vaccines that No One in Media Is Asking

While the Covid-19 crisis certainly has not spared Chinese companies, the recent attempted takeover of leading British smartphone chip maker Imagination Inc. by a Chinese firm proves that Beijing’s M&A appetite has hardly dulled. Chinese state-owned investment firm, China Reform, was, however, forced to abandon the deal following a furious backlash by British lawmakers on the same grounds that the Trump administration banned U.S. companies from doing business with Huawei: National security risk.

Although Chinese Foreign Direct Investment (FDI) has been on a steady decline ever since Trump ascended into the Oval Office, Chinese entities still invested some $25 billion in U.S. companies in 2018.

An outright takeover of U.S. oil and gas companies by Chinese firms would face heavy scrutiny by the U.S. government; however, a workaround is possible by selling only certain non-critical assets or entering joint ventures that give Chinese companies financial exposure but not operational exposure.

For instance, in 2015, Chinese firm Yantai Xinchao Industry Co. received the green light from the Committee on Foreign Investment in the United States (CFIUS) to purchase $1.3 billion in oil assets by Tall City Exploration and Plymouth Petroleum in the Permian Basin. 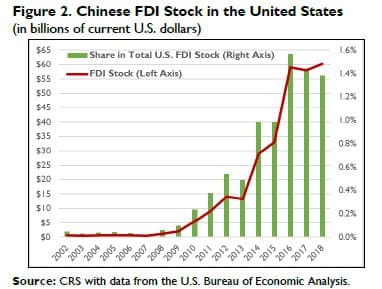 Interestingly, it’s the possibility of such deals that has the likes of Christian concerned:

“I don’t want to wind up five years from now with, all of a sudden, some foreign country shutting down production in Texas because they own it, and prefer buying from their own reserves overseas. I think that would be inefficient use, and I would think it would threaten national security.”

Does American Shale Have Non-Chinese Options?

The big question here is what other options are available for American oil and gas companies, which are now facing about $86 billion of rated debt due over the next four years; a bond buyback scheme set to benefit only a fraction of oil companies and zero certainty regarding when–if ever–oil and gas demand will return to pre-crisis levels.

There’s definitely hope on the horizon, with WTI prices having staged a big rally from single-digits three weeks ago to $32.50/barrel at the time of this writing.

However, it’s looking to be a long climb back to the top, with U.S. shale having a tight cost structure that requires WTI prices ~50/barrel to make it economically viable and banks no longer willing to make generic reserve-based loan terms given the scale of asset impairment.

Only the very well-padded are going to come out of this unscathed.

The lesser evil would be for American banks to continue seizing shale assets by establishing holding companies that will manage distressed assets and hope for energy prices to recover over the next 12 months or so. But that’s also assuming they don’t jump in bed with the Chinese.

The Trump administration isn’t lending the industry much of a helping hand at this point–letting the market dictate what happens next. But he’s also indicated that he’s prepared to unleash another trade war with China, and if that’s the case, he won’t want the shale patch getting into their hands.