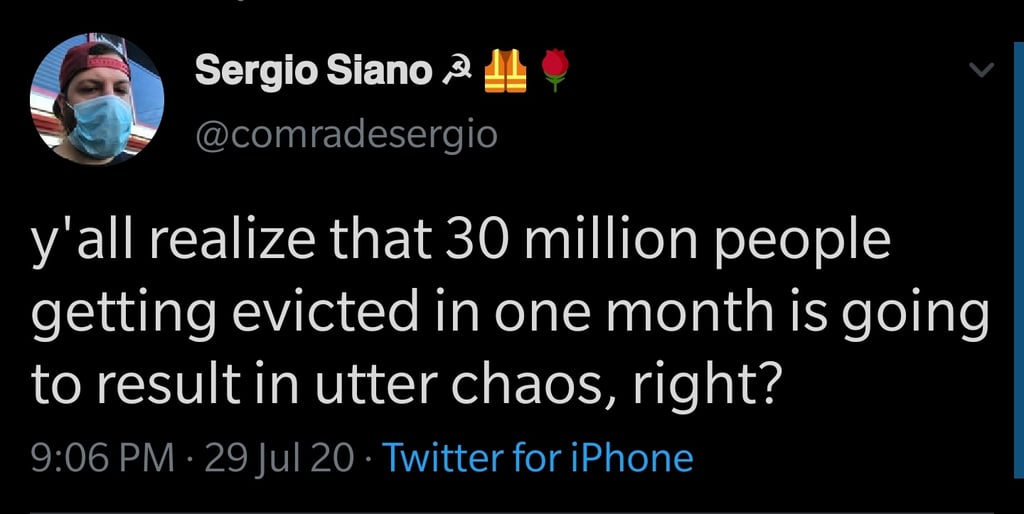 Is this what a collapse looks like? After the GDP numbers from yesterday Im starting to get worried that we are see a purposeful dismantling of America.

A surge in evictions could lead to a financial crisis

The U.S. economy will face great risk if lawmakers do not step up and stave off a looming, far-reaching eviction crisis, an economist with mortgage aggregator LendingTree told CNBC on Friday.

With eviction moratoriums lifting across the country, landlords could eventually default on mortgages and the coronavirus pandemic could worsen in the country if tens of millions of renters are put out of their homes in the midst of a tough economy, said Tendayi Kapfidze, chief economist at LendingTree.

“This really could be catastrophic, and it extends beyond just the rental industry,” he said in an interview on “The Exchange.” “It could actually affect the single-family housing market and the economy as a whole.”

Nearly 2-in-5 tenants across the country, particularly low-wage workers, are in danger of being served eviction notices, according to analysis from Stout Risius Ross, an investment consulting firm. People of color are especially vulnerable. While half of White renters project that they can cover rent, just more than a quarter of Black renters feel the same, according to the study.