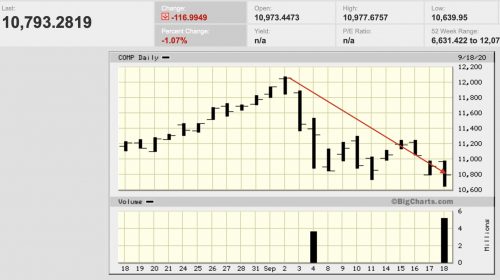 All three major stock-market indices completed three consecutive weeks of falling today as we head into fall next week. The NASDAQ, as you see in the opening graph, has set up a clear trend of perfectly aligned closings this week.

This summary of the market in September — the bullseye for my target dates for the market’s big fail — will be short but sour, as I try to focus my writing time on my next Patron Post. I just could not resist commenting on this week’s decisive market close.

The NASDAQ is important because it is loaded with those high-tech stocks that have been the only thing taking the market up at all year. The generals, however are retreating.

Apple, for example, was the fastest to rise in the market’s melt-up stage and is already the fastest to have fallen into its own bear market, which it entered today by ending more than 22% below its last all-time high on Sept. 1. That’s half a trillion in value snapped off in what, today, became Apple’s fastest fall into a bear market since 2008 when it lost half its value in forty days. It may arguably be Apple’s fastest fall ever:

Apple fell by 50% in 21 days during the October surprise of 1987. However, that one took a few days longer and then mostly happened in one all-out market-busting day known as Black Monday. It hardly counts, anyway, since Apple was only priced at $14.80 per share!

Algorithmic charts (percentage drops) are not always the best comparison, as some claim, since it’s a lot easier to fall 50% as a fledgling upstart almost single-product company when that only means share prices losing $7 than it is as a mature, multi-trillion-dollar, multi-product, multi-national company with hard assets and markets all over the world. No comparison really.

Even in ’91 when Apple fell more in a month than it has this month, Apple’s share price was a measly $18.19; and in 2000, its next comparable plunge, it was still only $26.75 at its zenith and a couple of stock divisions away from today’s scalding prices.

On Sept. 4, alone, Apple experienced the largest single-day loss in stock value of any US company in history.

So, it may be fair to claim this has been Apple’s fastest fall into a full-on bear market ever if you attempt to balance percentage drops from minuscule numbers with a half-trillion-dollar point drop in less than three weeks. Even the 2008 plunge had forty days to play out, while this one is still ongoing, and I think this one hit its “bear” level sooner.

Possibly more important today than the NASDAQ’s downward trend for the month or the big bite out of the big Apple is the S&P’s close. It finally hammered and held decisively below its 50-day moving average (the tan line), which had provided a repeated floor of support this month:

U.S. stocks just posted their third consecutive weekly decline, and the S&P 500 just closed below its 50-day moving average for the first time since April…. Those types of moves are “yet further confirmation that the corrective process is ongoing….”

Even so, a near-term rebound could be on its way, as “actual support levels are coming into play on the index as well as on the stock level….”

The S&P’s next level of support will come at the 3,200 level where it tags its recent plateau and its less-signficant 100-day moving average. Then it gets even stronger support around 3,000, which has been both a ceiling and a floor of support in the past.

If the S&P busts through all of those lines of support, it could be bottoms-away back to 2,200.

On a weekly basis so far, September has been entirely downhill, and breaking decisively through the 50 DMA today is the first break past normally strong support, but a fight still lies ahead between the bulls and the bear at those various levels of support just described.

This month perfectly punctured the bullseye target range I’ve been providing of August and September being the most likely months in which the market would start, again, to catch down to economic reality. The market’s decline on a weekly basis began on the week that started on the last day of August. On a daily basis, that break happened on the 3rd of September:

Battle between the bulls and the bear

I have been saying all along, I don’t see a big waterfall plunge like we had in March as being the most likely path down, even though I think we return to March’s lows and likely go substantially lower than that before we finally find the stock market’s ultimate bottom many moons from now.

I see a marathon battle between the bulls and the bear as most likely with the bear tearing away claws full of bullish flesh in painful swipe after swipe and eventually winning the day as the market hangs on those lines of support, maybe tries to rise from them, and then busts through again and again.

That’s because the bear has COVID winds at its back, while the bull has them in its face. In other words, the damage to the economy from COVID-19 is already in, and the bulls just can’t see it because those COVID winds are stinging their eyes with tears. Poor bulls just cannot see the bear they are up against because they have been fantasizing about a recovery that never had a chance of happening as they hoped.

Those lines of fairly strong support in the graphs above only reinforce my stated likelihood of a more protracted battle than we saw in March. However …

The bulls were underFed and underwhelmed

The Fed’s failure to do anything of importance for the stock market this week also reinforced my position that the Fed is impotent at this point.

Today, MarketWatch noted how likely that is:

The Federal Reserve has said for some time that it didn’t want to become impotent with its policy rate stuck at zero. Now we know their plan of action to avoid this outcome.

On Wednesday, the Fed rolled out of the final details of its new strategy, promising to allow inflation to overshoot its 2% target and setting a relatively strict criteria for the next interest-rate hike.

One goal is to avoid past mistakes of tightening too soon to strangle a recovery….

If that’s their plan to avoid impotence, they are impotent. The Fed hasn’t been able to get inflation up in ten years! It may have help with government helicopter money this time around, which changes the game, as I’ve written in recent Patron Posts, but it’s not much of plan. It comes to this:

“We’re going to save the market by keeping our zeroed interest rates that are not saving the market this month anyway low enough until they finally work.”

That seemed to be the only policy plan the Fed had for September, and that plan already failed in March (until the federal government finally stepped in with trillions in helicopter money, which it is now hesitating to do). Now the Fed is failing again in September, so the bulls didn’t get much bulwark support from the Federal Reserve, which seems mostly concerned about reserving what’s left of its strength. All the Fed offered in the face of a falling market was more of something that already isn’t doing anything.

Economically speaking, that adds up to,

“Our plan is to keep interest this low so as not not to crash the recovery that is already not happening!”

Perhaps it is needless to say, the bulls walked away from the Fed’s watering trough somewhat disgruntled this week. There was no Viagra in the water. Not a good week to be a bull. (No wonder bullheaded Davie Portnoy was crying his eyes out with heartburn.)

Don’t be surprised by October

While this battle between the bulls and the bear could play out painstakingly, I’ve also said more than once this summer that, when bad news aligns for the stock market at this particular time of year, October loves a surprise!

By that, I mean a hauntingly Halloweenish surprise any time during the month — a 1929 kind of surprise. It’s not the scenario I’m betting on, but I wouldn’t be surprised by it.

Good thing the bull in the picture above already has his mandatory mask on because this is a Halloween filled with COVID masks as well as gas masks in many major US cities due to riots and wildfires, accompanied by the sulfuric stink and fomentation of the most divisive election in a century. So, who knows what wicked, blackened swan with the stench of hellfire on its singed feathers may this way come in October?

After all, it’s 2020 — a year full of hellish surprises — and October is less than two weeks away!

A second waterfall kind of event for stocks this year has never been outside the scenario I’ve been consistently presenting since May for the stock market bulls’ ongoing 2020 battle with the bear. The bulls must now face the facts about how far short the re-opening recovery fell from their bulls$&! fantasies.

In more ways the one, the fall has not yet begun.