Stocks are poised to break big, one way or the other

His weekly flurry of trendline charts warn that the major indexes have been compressing in rising wedges that increasingly point to a binary outcome: either a massive new leg up that will result in the market making new all time highs, or a bad breakdown that could waterfall into a 2008-style correction.

One high-level chart he tracks closely indicates that if the S&P 500 does not soon rise above the blue trendline that began in 2009, a sharp roll-over is highly likely: 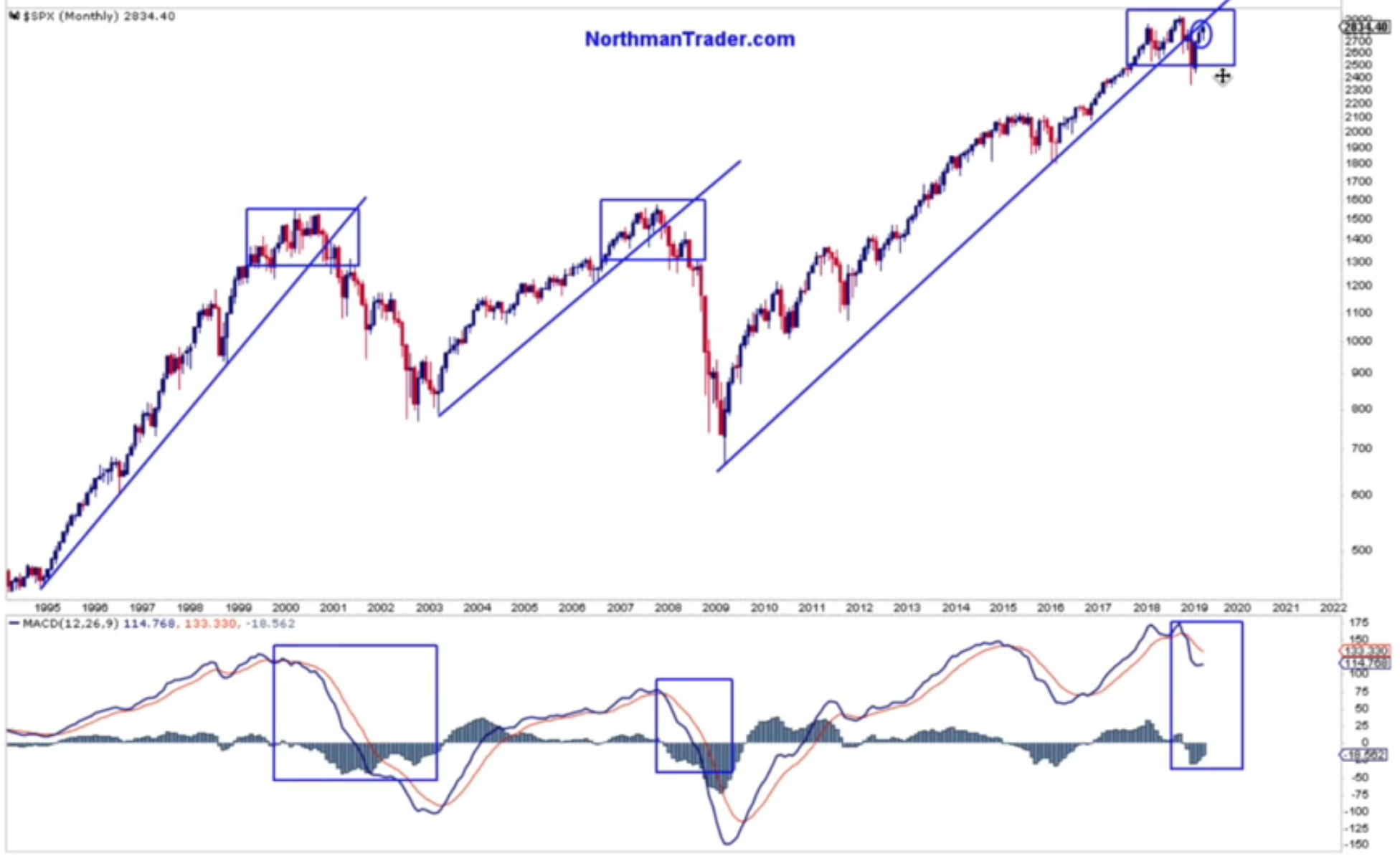 His reams of data increasingly suggest that today’s global elevated asset prices are in no way justified by the fundamentals of the underlying world economies. And that someday — perhaps quite soon — a reckoning long overdue will occur:

Passive investing obviously is becoming a larger portion of the investing mix to the point where we have more ETFs investing than we actually have stock traders. And so there’s this element of automatic allocations. A lot of these are driven by market cap weightings, for example.

So to the extent that you have a lot of influence coming in from passive funds or ETFs, they will buy a certain set of stocks more actively than others, because it’s just the way it’s allocated. We saw that last summer — and this is one of the things want to pay attention to, when you see divergences and deviations.

In September of last year, I wrote a piece called “Lying Highs” in which I pointed out that we were seeing ever-narrowing slope of the rally, driven by fewer and fewer stocks. It’s kind of one of those classic ‘popping’ signs, but the problem with it is it doesn’t give you precise timing. This stuff can drag on, and on, and on. We saw that throughout all last summer.

So these passive investing vehicles come in and keep buying high cap tech stocks —remember, this drove Apple to $1 trillion dollars market cap, Amazon to $1 trillion dollars, and analysts kept raising their price targets. And so money keeps flowing in and stock prices go higher. It attracts more money, and  that attracts more money, and that attracts more money. It becomes this pyramid scheme — until something breaks. And that’s what we saw in the fall. The rally was just too thin leading up to that, and then required the technical downside reaction. That’s the danger of it.

I like to say “Just because they’re buying doesn’t necessarily mean that they know what they’re doing.” Because these momentum moves just defy reason. You got to be able to shut off your brain and understand what’s driving this. It’s not fundamentals, necessarily. It’s basically just the flow of money at the end of the day. And the algorithms buy it. So be aware of the structure of the market.

Now, I’ve been very critical of how this rally has formed so far this year.

One of the lessons I drew out of 2018 was this simple message: Extremes will become more extreme. And that’s the biggest danger for traders, because you can easily get chopped up. And when things get so extreme, you’ve got to be very careful in not losing sight of the big picture and be patient and wait for the right setup.

The fact that we’re here now 10 years after the GFC and the Fed tried for only three brief months in 2018 to be non-accommodative. Jay Powell dropped the “accommodative” just in the September/October time frame, and it blew up in their faces. And the ECB is still sitting with negative rates — they ended QE at the end of December and European growth is maybe 1%, and Germany looks around 0.6%. We’ve never been in an environment where we are risking entering a recession with negative rates. We have no idea what that means.

And so the concern is that this past decade’s wave of cheap money will be our undoing. Since 2007 global debt has increased by $70 trillion. We’ve now got corporate debt at $6 trillion. And at the same time, when you look at real GDP growth, it just never kicked into high gear.

The economy is dealing with two major issues. One is obviously demographics. There’s an aging wave that’s just not changeable, and it’s got implications. We have huge unfunded liabilities. We’ve got a whole replacement cycle going on that’s not conducive of productivity. And then on top of that, we have the greatest deflationary force the planet has ever seen—technology. Facebook, for example, does not need that many people to handle over a billion customers.

So there’s this deflationary force that’s built into the economy that’s preventing from proper growth taking place as well. At the same time, you’ve got all these debt issues that are not being resolved. They act like a dual brake on the economy, and they can’t solve it.

And it seems we have no political structure anywhere globally at the moment that’s able to address structural issues in any shape or form. I don’t see it in the US. I don’t see it in Europe. Take Brexit as an example; it’s total chaos. There’s no way to come to a cohesive solution on anything.

How do you fix the structural issues in the economies if you don’t have any type of political cohesion taking place? There’s really no way out of that.

546 views
READ  Are Markets Wrong Again About The Fed?
READ  Global Financial Markets – The Crack we have been Waiting For!