Oh, what a tangled web we weave, when we all practice to keep fundamentally insolvent entities afloat no matter what.

How many worldwide systems exist to enable broken and unsustainable economies and companies? The Fed’s ZIRP has kept over 10% of publicly traded American companies alive, companies that should, by all rights, be out of business because they can’t survive without free fiat currency “loans” (Is it a loan if everyone knows you can’t ever pay it back?) from the government.

And now we have Target2, which enables the eurozone’s zombie countries to continue shambling along; the economic terminally ill feeding off the vital lifeblood of the fiscally healthy. Fixing debtor nations is not as easy as letting a doomed brick-and-mortar dinosaur finally go out of business.

But math doesn’t care if you’re Sears or Italy. Someone’s got to pay eventually, and if no one does, math has a way of making things very messy, then very scary, very fast.

Target2 – the Trans-European Automated Real-time Gross Settlement Express Transfer system – started off as a simple payment system for cross-border transactions in the Eurozone. 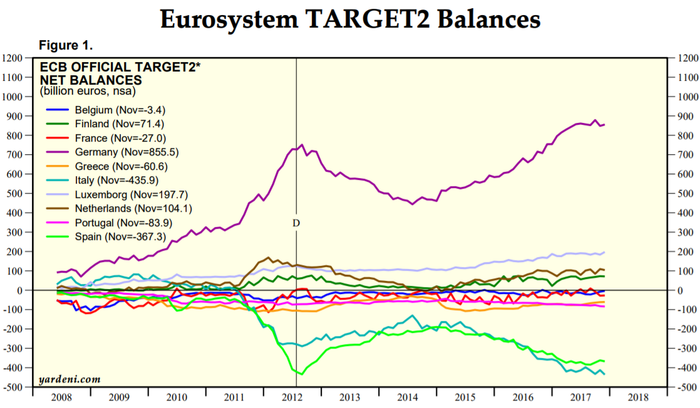 Its use is mandatory for the settlement of any euro transaction involving the ECB and the national central banks of the Eurozone member states.

It has, however, become something much more – the silent bailout system that keeps the euro afloat. Europe’s political elite know this – they just don’t want the rest of us finding out.

Surplus regions need to recycle the surpluses back to deficit regions via transfers to keep the Eurozone economies in balance. The largest surplus country – Germany – refuses to formally accept that the Eurozone is a “transfer union”, but, deficit countries including Italy – the largest – are using Target2 precisely for this purpose.

In short, Target2 has become a giant credit card for Eurozone members that import more than they export to other members. But note two key differences compared with a normal credit card: the interest rate charged is zero, and the loan never needs to be repaid.

Italy and Spain owe €433bn and €374bn respectively, which they can never pay, and Germany is owed €871bn, which it will never recover.

ORIGINAL SOURCE: The secret bailout system the EU doesn’t want you to know about by David Blake at City A.M.on 5/17/18