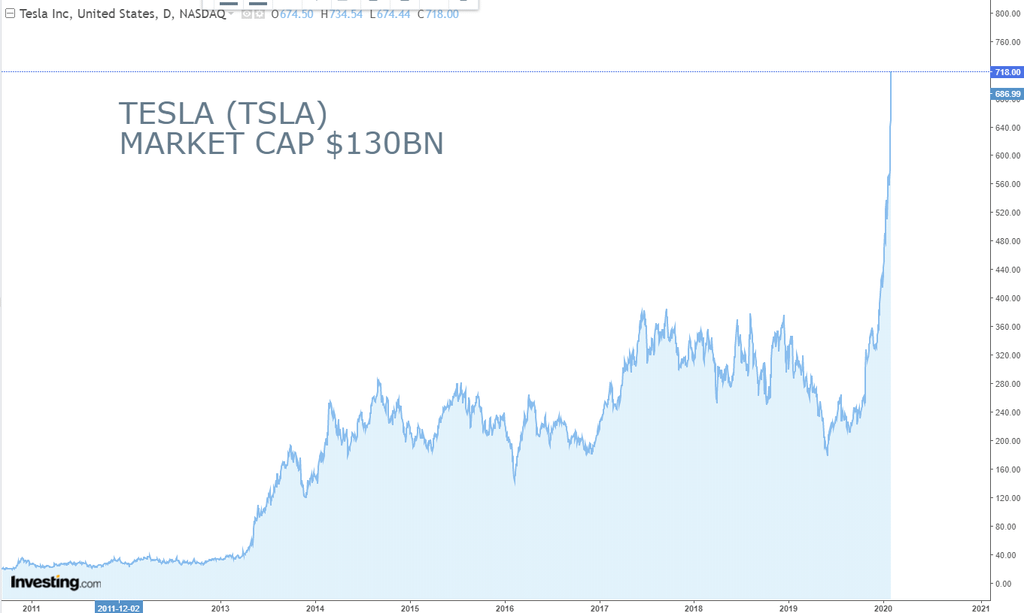 The predominant issue here is speculation. There is nothing fundamental driving what is happening with TSLA right now. I wouldn’t get involved with this unless you are a trader and know what the hell you are doing.

Tesla stock is ridiculous. Dot com is back baby but it’s we’re gonna save the planet using lithium batteries (that are mined and shipped with massive Diesel engines) but still as long as it means we can virtue signal.

Whenever the economy turns down Tesla will go out of business. There is nothing viable, economic or practical about their business. Elon sells a status symbol to people who derive their wealth from a government inflated stock market

The Fed: 'We see no bubbles"

Robinhood is telling me Tesla’s market cap is still 110 billion but according to google’s data and yahoo at (finance.yahoo.com/quote/TSLA/) Tesla has a market cap of ~140 billion dollars.

This is like a week or two away from surpassing Boeing’s market of ~177 billion dollars. How can a car company that is delivering what less than a million cars in 2020 have a market cap that surpasses some of the most established airspace and military companies. I understand electric cars are the future and I’m happily making bank on owning Tesla stock but how can the valuation keep growing when there are still expectations to be met.

Is this unironically a bubble moment? I’m not saying Tesla’s stock doesn’t deserve to be north of 200 dollars but when the stock already surpasses some of the most established companies such as but not limited to : Costco, Lockheed Martin, Ampgen, and soon to be Boeing way before the company can deliver even 1 million cars in a year what is going to happen when we get to 1 million deliveries? Is this going to be a 500 billion dollar company? What happens if they deliver only 2 million cars in a year will this be a trillion dollar company at the current rate of valuation?