IT GOES against everything we’ve been told about our “robust” economy, but the Australian dollar is about to take a massive hit.

THE Australian dollar could drop as low as 40 US cents, relegating our economy to the status of an emerging market, a top fund manager has warned.

Vimal Gor, the head of income and fixed interest at BT Investment Management, says a shock hit to the currency will be around the corner if we don’t stop living it up pre-GFC style, and learn to spend within our means.

The “unique combination” of increased reliance on foreign capital and fast falling interest rates meant the Australian dollar was at “far more risk than most people think”, Mr Gor said.

“This reliance on outside capital to fund our lavish lifestyle, which is still stuck in 2006, puts us in a very different situation to pretty much every country that is currently running a zero or negative interest rate policy.

“Economic growth in Australian dollars has been so weak for a number of years, even as real economic growth continues to show some pretty encouraging headline numbers … Yet we keep sending this growth overseas through high imports and paying out on past borrowings.

“This trend has deteriorated in the last year meaning we have to borrow from and sell assets to the rest of the world at a new, faster pace.”

He said that while the mining boom was in full force “everyone wanted to be Australia’s best friend”, but since the glory days had come to an end in 2014, the nation was more like “the little weedy kid no one wants on their team”.

After years of rampant borrowing “against the windfall of rising commodity prices, essentially acting as if they would last forever”, the big banks’ balance sheets more than doubled from 2003 to 2008, with much of the foreign cash going “straight into house prices”.

“The income windfall from rising commodity prices was spent as quickly as we earned it,” he said.

The Australian dollar is currently about 74 US cents.

The Australian dollar had a good thing going earlier this week as it rebounded from a 20-month low in four straight days of solid gains.

But downtrends are downtrends for a reason and betting against them is unwise. That rule of thumb once again proved to be true today in a 103 pips decline to 0.7245. 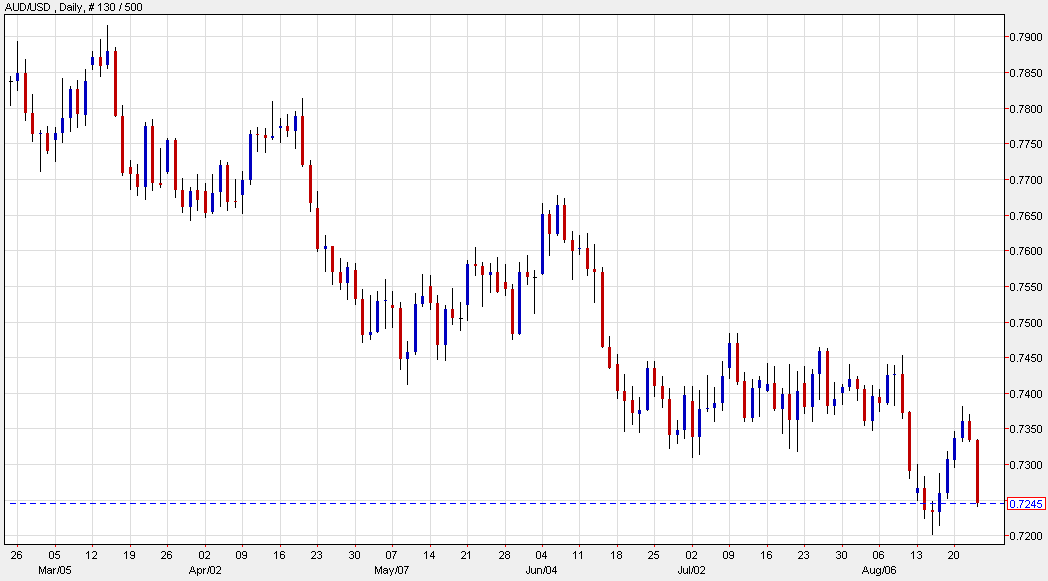 The drop today highlights how dismal look of the longer term chart, which has been in decline since hitting parity in 2011. 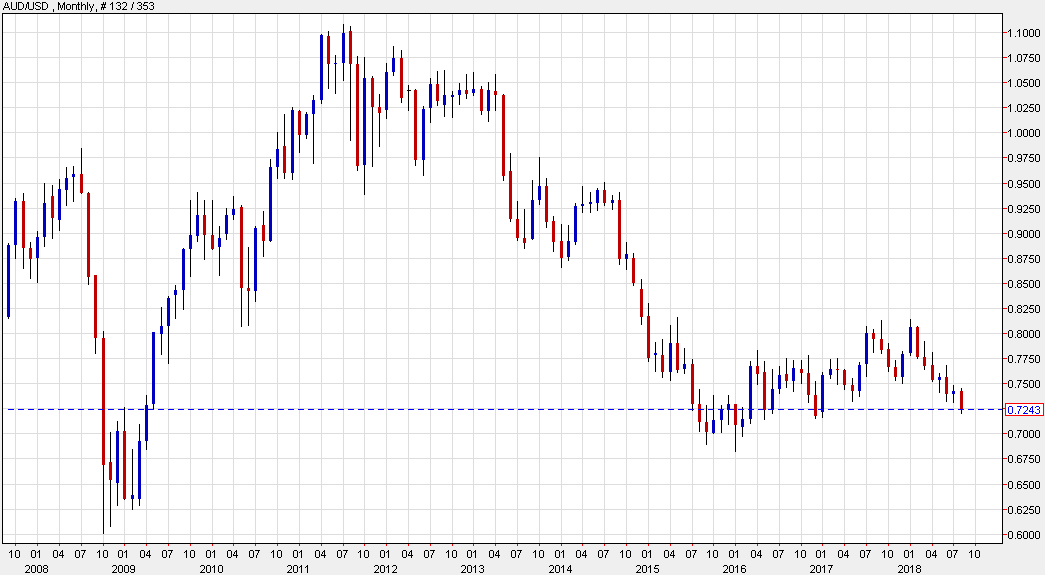 The bigger deal for me is fundamentals.

It was a double-whammy of political and fundamental hurt for the Aussie today. The Prime Minister is fighting for his lift while China has promised to retaliate after Australian blocked Chinese companies from building out the 5G network.

That’s the kind of pain that lasts more than a day.