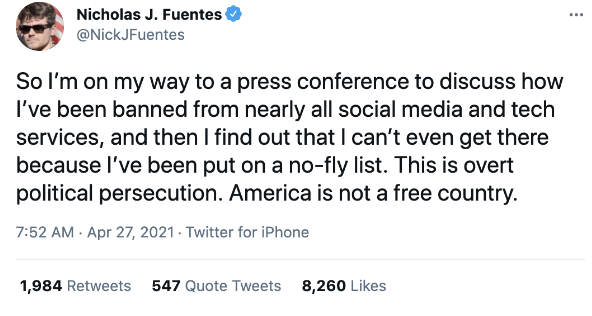 America First talk show host Nicholas J. Fuentes is now officially a terrorist, at least according to this Tweet:

Since attending President Trump’s rally on the Ellipse on January 6th I’ve been:

And I haven’t even done anything wrong!

In case you’re not familiar with the matter, Fuentes used to have a very successful YouTube podcast, called America First with Nick Fuentes.

Last year, he was banned from YouTube, Facebook etc., had his bank account frozen, he was dropped by all payment processors, you know the drill: if you’re a political dissident (as in you have the wrong opinions) in the land of the free, it doesn’t matter if it’s private companies stepping on your throat.

More precisely, it is perfectly legal for banks, payment processors, internet companies etc. to deny you service, and for social media to ban you from the public space, because you don’t have any rights.

And now, it looks like Fuentes cannot fly on a plane anymore.

Did you get any documents or other notice or explanation to show it happened and why?

Read the old @ACLU on how the no-fly list is one of the worst and most abusive assaults from the War on Terror on core civil liberties no matter who it's aimed at: t.co/JQlGGtpPTQ t.co/idlWT9ES1F

As a foreign commentator, please don’t justify the liberties of an American being stripped away just because you hate his rhetoric t.co/9DS5GGpXT8

This is the new America for you: if you’re a pro Trump kid, against globalism, against mass immigration, against anti-white racism, i.e. if your political speech (Fuentes had to build his own streaming platform, AmericaFirst.live so he can continue to broadcast his show) offends the transnational cabal that rules America, they can make your life hell.

See also  DESPITE ALL THE MEDIA ATTACKS: Trump at ‘all-time high’ in 2024 betting, swamps Biden.

As in, you will no longer able to get a normie job, ever, you won’t be able to have a bank account/a social media account, ever, you will not be able to travel via airplane because you’re a terrorist guilty of wrong-think, ride sharing services will ban you, and so on and so forth.

And the sky is the limit, this is just the beginning.

The worst thing is that there is no recourse to all this government approved tyranny via private proxies, since it’s private companies doing it, right? Even if there are no charges against you, you are presumed guilty of whatever the “woke left” wants to call you (racist, nazi, terrorist, extremist, you name it, they got it), and your life will be permanently destroyed.

We are living now through the final stages of the unholy alliance between social elites and Marxism, bourgeois capital and ideological fanaticism that will throw all our societies back to the Stone Age.

Someday soon we’ll have to fight these people or we’ll be forced to do what they say. That sounds sensational, but they are not going to stop on their own.