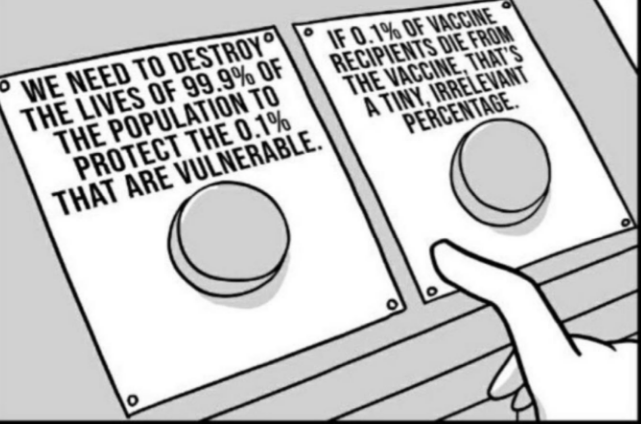 To begin with, check out this back and forth between Fauci and a Politico presstitute:

Politifact: Sen. Rand Paul, who you have tangled with in the past, suggested that you and the NIH funded risky research that eventually down the line was connected to COVID-19? I don’t want to dwell on this for too long but I do want to give you that chance to react to his comments today.

Dr. Fauci: That’s actually preposterous. To bring something up is really not helpful. He was saying that we funded a kind of research in China that could lead to dangerous research. That’s not the case. So what he was saying was absolutely not true. It is really unfortunate that he brought that up. It really does nothing but cloud the issue of what we are trying to do. So it was just unfortunate that he said that.

Politifact: That has been the subject for a lot of our fact-checking on the coronavirus for the past year. There’s a lot of cloudiness around the origins of COVID-19 still. So I wanted to ask are you still confident that COVID developed naturally?

Dr. Fauci: No actually, that’s the point that I said. And I think that the real unfortunate aspect of what Senator Paul did was he was conflating research in a collaborative way with Chinese scientists which was — you’d almost have to say that if we did not do that then we’d be almost irresponsible because SARS-COVI-1 clearly originated in China… So we really had to learn a whole lot about the viruses that were there, about whether or not people were getting infected with bad viruses. So in a very minor collaboration as part of a sub-contract as part of a grant, we had a collaboration with some Chinese scientists. And what he conflated that was that we were involved in creating the virus. Which is the most ridiculous majestic leap I’ve ever heard of.

There you have it.

Fauci just admitted that the virus may not have originated naturally, something he refuted earlier until now, and the US government DID FUND Chinese research at the Wuhan through NIH grants under Fauci’s leadership

This was right after he accused Senator Paul of lying about this collaboration.

Dr. Fauci claims the NIH “never” funded 'gain of function research (the creation of superviruses). This document obtained through the freedom of information act shows that the NIH in 2014 stopped 19 ‘gain-of-function’ experiments… t.co/uRNqzQsUE6

A year ago, lab leak theory was dismissed as “misinformation” by Facebook’s ‘independent’ fact-checkers and posts mentioning it were removed. Now, even Dr Fauci is saying it should be investigated. Good example of why Big Tech companies should not try to censor “misinformation”.

And here’s the Mossad connection.

During a NATO conference in 1968, Western governments spoke of weaponizing a flu virus to spread from containers released by agents behind enemy lines. The virus would hit hard, but be altered to go inert after two weeks, or essentially mutate into a version of itself that was no longer capable of causing disease.

The idea was to incapacitate the opposing army by causing mass sickness, not death. Our troops could then easily overrun any opposing force with very few casualties.

Do you think that research ever stopped?

Back to the 2020 “pandemic”, we’re in a peculiar situation. Everyone must get the gene-altering mRNA vaccine, if one wants to be able to function “normally” in society.

What’s shocking is that claiming you have antibodies (as in you already had “covid” via an antigen test) won’t matter. They have already deleted the fact that natural immunity exists.

They put people in jail for not wearing masks, when there wasn’t a single law passed requiring them.

Every order issued by a member of the executive branch was illegal, and was not applicable to citizens. It didn’t matter.

They forced your business to close if they decreed it. They limited the customers you were allowed to have.

You think they’ll allow you to claim you are immune?

Your only real defence will be an armed weapon pointed at their heads.

And everything revolves around that stupid PCR test. IF you test 100k people with a test that is 99.9% accurate, you will still get 100 people who get a false positive.

The real rate is that if you test 100 people, you will get 10-15 false positives, depending on how you set the cycle threshold.

Every single positive case since February 2020 is actually within the margin of error for the test. So it is entirely possible that every positive case of Covid could be a false positive.

I got word of another baseball player who tested positive for Covid during the random testing. He is of course fine, no symptoms. But he can’t play for the next two weeks and has to get two consecutive negative tests before he can be called up again.

When are they going to tell us the true accuracy of the PCR test? We know that the tests all say that they can’t be used to diagnose an illness, but they are using it for that purpose anyway. Prior to Covidiocy, researchers all said that a PCR test can be somewhere between 90-95% accurate if you are certain the sample you are copying is what you know it is. IF you aren’t certain about the sample you are copying, the accuracy of the test quickly approaches zero.

The more times you amplify the pattern, the less sure you can be that what you are seeing is actually a part of what you are trying to find. The specific markers they claim are from SARS-CoV-2 are also found in over 250 different proteins in the human body. If you are looking at a blood or saliva sample from a human, and you amplify it 45 times, portions of those other proteins may be showing up and completing a supposed sequence of SARS-CoV-2.

When you get a PCR test for Covid, they are not looking for the entire supposed genetic sequence. They are looking for a primer sequence that marks the beginning of the genome. Some tests look for the start marker and end marker. It is like listening to the first three notes of a song and saying you know that the next three minutes are. But what if there are 250 different songs that start with the first three notes? Can you really claim to know that you are listening to one specific song?

This can also explain the idiocy of the Covid variants. Every time these researchers sequence supposed Covid, they are looking at tainted genetic sequences that make it look different from the “original”. You also have the fact that the original “gold standard” sequence is not real. It was created using a computer model of what SARS-CoV-2 should be. It is no wonder nobody has been able to match a pathogen to that original sequence.

In normal situations all of this would be called fraud. But during Covidiocy, fraud became unquestionable science. Although the accuracy of your diagnosis is near zero, you are still told with 100% certainty that you are infected and forced to live with the consequences with no recourse.