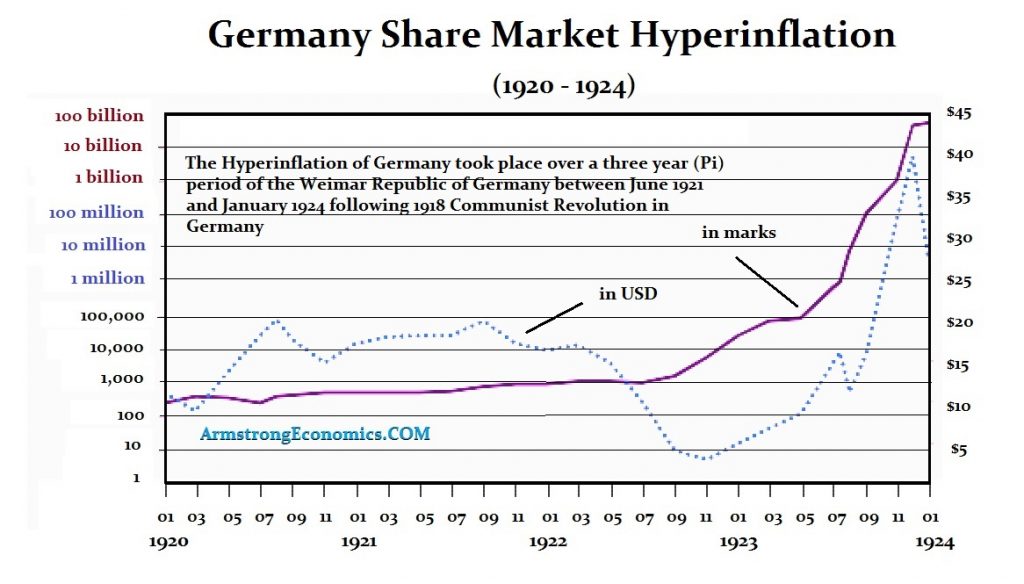 ANSWER: Yes. However, you must understand that because the world was on a gold standard, the arbitrage volatility was reflected in the bond and share markets when the currency was fixed. This is why the German share market closed in August 1914, along with just about everyone else. Here is a chart that show the performance of the German share market during the hyperinflation period. We have the DAX also extended back in time. But don’t forget, the DAX is a total return index. If we plot just price, you will see that the German share market looks very much like France.

The primary stock exchange in Germany was in Berlin. However, there were 21 exchanges in total. The origins of the Frankfurt Stock Exchange date back to medieval trade fairs during the 11th century. By the 16th century, Frankfurt developed into a wealthy and busy city with an economy based on trade and financial services. Annuities in particular were the hot items back then. It was in 1585 when the bourse was established to trade in fixed currency exchange rates. Currencies actually led to exchanges rather than shares. Eventually, Frankfurt developed into an early share market, competing with London and Paris. Mayer Amschel Rothschild and Max Warburg became very influential in the financial trade of Frankfurt. 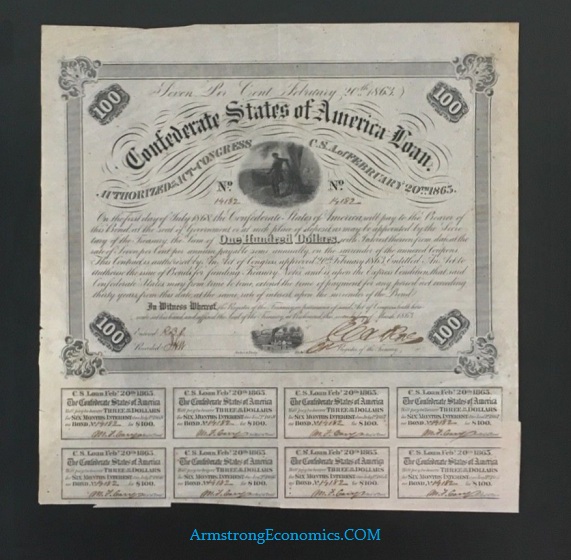 The Frankfurt Stock Exchange had been a major international center. It was completely wiped out by World War I and its consequences. Back then, foreign shares and bonds traded on cross exchanges since money was fixed. German investors at the start of World War I dumped foreign bonds and shares, fearing that their capital would be restricted or confiscated. This is also why all the exchanges simply closed in Europe. Any capital they managed to free up from the sale of foreign investments was reinvested mostly in German government bonds. They were patriotic and believed in their government. However, by the end of the war, the Frankfurt Stock Exchange lost all foreign securities listings for bonds or shares. Frankfurt lost its standing as an international stock exchange entirely, and that would only begin to resurface in 1949.

READ  Hyperinflation is Already Here – You Just Haven't Realised It Yet.

In Europe, the fear of catastrophic declines in stock prices was met with controls at first. Overall, stocks and bonds were not allowed to trade below the price they had been trading at on July 31, 1914. Restrictions were also placed on capital. Money movement was highly restricted to preventing any large outflows of capital, forcing many into black markets. One means was to buy collector stamps and coins. They would then export especially rare stamps and then sell them in America. After two world wars, most of the rare stamps happened to be in America and gradually returned to Europe during the late 1960s.

With these restrictions in place, markets reopened in Europe. The London Times began printing stock prices for London and Bordeaux on September 19th and for Paris on December 8, 1914. In January 1915, all shares were allowed to trade on the London Stock Exchange, though with price restrictions. The St. Petersburg exchange reopened in 1917, only to close two months later due to the Russian Revolution. The Berlin Stock Exchange did not reopen until December 1917.

The loss of the war meant those who had invested in German bonds suffered the same fate as those Americans who invested in Confederate bonds. Indeed, to fund World War I, Germany relied more on raising money by selling bonds than imposing taxes. This had the net effect of wiping out the savings of the middle class and upper class. During the hyperinflation going into 1923, the losses in bonds were devastating, but in contrast, equities became a prized object among speculative investors. The Frankfurt stock exchange saw unprecedented losses in the bond markets and shares became the speculation objects that rose sharply going into 1923.

The German war costs covered by taxation, including state and federal combined, was only 13.9% which was lower than 18.2% taxation imposed in Great Britain for the war effort. German debt exploded after 1916. That is when the federal government’s short-term floating debt grew relentlessly, and by the end of the war it accounted for nearly one-third of the German national debt. The seriousness of the German debt crisis, which led to the postwar hyperinflation, was the fact that after 1916 German banks began to purchase more of the government’s floating debt. Government debt dominated the market and banks took on more public debt than private. When the public debt was marginalized by hyperinflation, it also wiped out the banking system. 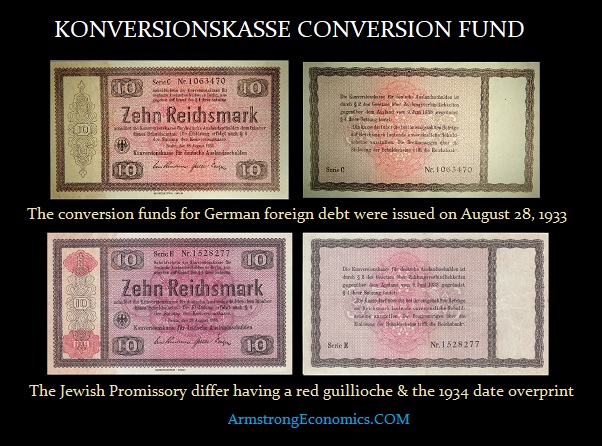 By the end of the war, the international contacts of the Frankfurt Stock Exchange had been lost. Inflation set in and reached its first peak in 1923. In October 1929, the Germany stock exchange prices crashed dramatically on the 25th. The world economic crisis ruled the following years. The economy only began to stabilize in 1932. The following year, the Nazis took over and centralized the nation’s economic policy. The Frankfurt Stock Exchange was merged with the Mannheim Stock Exchange and the number of exchanges nationwide was reduced from 21 to nine. Under the stringent Nazi economic regime, free trade was suffocated as Hitler defaulted on external debt. The majority of capital assets was directed to benefit the war economy. He even issued conversion fund certificates that were exchanged one for one with German marks if you sought to leave the country. This was part of the currency controls but they were worthless once you left the country.