“Last year Simon & Schuster released The Chickenshit Club: Why the Justice Department Fails to Prosecute Executives by the Pulitizer Prize winning journalist at ProPublica, Jesse Eisinger. If you read nothing else this summer, you should read this book followed by Nomi Prins’ Collusion: How Central Bankers Rigged the World.

The two books provide Americans with a comprehensive understanding of how the Justice Department, Federal regulators, a growing number of Federal judges and the central bank of the United States known as the Federal Reserve have been corrupted by corporate influence. To a large degree, they now serve their corporate masters, not the American people.”

“How worried should the government be if a punishment causes a company to go out of business? Should regulators worry about the cashiering of innocent employees? What about customers, suppliers, or competitors? Should they fret about financial crises? From this rather innocuous mention, the little notion of collateral consequences would blossom into the great strangling vine that came to be known after the financial crisis of 2008 by its shorthand: “too big to jail.” Prosecutors and regulators were crippled by the idea that the government could not criminally sanction some companies—particularly giant banks—for fear that they would collapse, causing serious problems for financial markets or the economy.

Today’s Department of Justice has lost the will and indeed the ability to go after the highest-ranking corporate wrongdoers.”

“Central banks and institutions like the IMF and the World Bank are overstepping the boundaries of their mandates by using the flow of money to control global markets and dictate economic policy both at the domestic and global level. These public institutions have become so dependent on funding from private banking and the revolving door between the two worlds is so smooth that public and private banks are effectively working toward the same goals.”

Fear of collateral damage that harms innocent people and the economy is just the cover story and a means to provide a rationale for those who are reluctant to participate in this terrible erosion of justice and the violation of oaths.

See also  This is what the Federal Government wastes your tax dollars on: Social Security goes after local man over $122 from 48 years ago

And the greatest enabler is the us vs them, red vs blue partisan politics driving by richly funded propaganda that drives people to vote with their emotions rather than to think for themselves.   This has always existed, but now it is predominant.  Opioids are not the only addiction that people turn to in their frustration and despair.   People become addicted to propaganda, and the emotions it stimulates to stop the pain of thinking.

It is time to wake up, and stop rewarding those who are getting rich and powerful by manipulating you.  It is time to stop wallowing in media outlets and internet sites that are just propaganda platforms for demagogues and the powerful few.

People go mad in herds, but come back to their senses one at a time.  It is time to wake up and start thinking for yourself again.

The power, at least for now, is in our refusal.

Shun them.   Refuse to patronize or serve them.  Stop the flow of money that feeds them,  and the corruption will die of itself.

For nearly four years you have had an Administration which instead of twirling its thumbs has rolled up its sleeves. We will keep our sleeves rolled up.

We had to struggle with the old enemies of peace–business and financial monopoly, speculation, reckless banking, class antagonism, sectionalism, war profiteering. 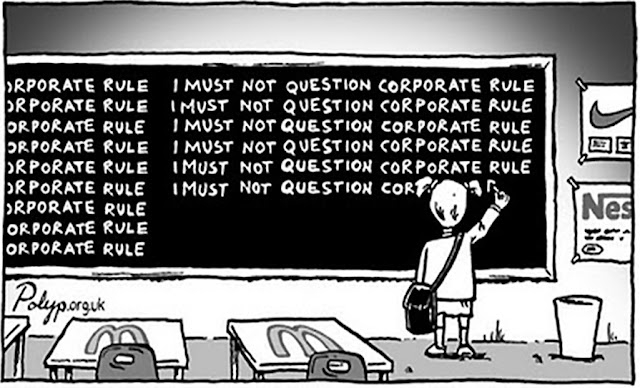