Batteries became an indispensable part of our daily lives during the 20th Century. But the pace of change has dramatically increased in the 21st Century with the development of new battery types. The resulting battery revolution that is underway is enabling the beginning of a seismic shift in the way we power our transportation systems and heavy equipment, as well as how we power our cities.

The key to this revolution has been the development of affordable batteries with much greater energy density. This new generation of batteries threatens to end the lengthy reign of the lead-acid battery.

But consumers could be forgiven for being confused about the many different battery types vying for market share in this exciting new future. So let’s break down the basics of battery types and their applications.

Batteries are broadly categorized as either primary or secondary. A primary battery is a disposable battery. We are all familiar with those types of batteries. The most common type of primary battery is the alkaline battery, so named because its electrolyte is alkaline (potassium hydroxide).

The 20-pack of Duracell batteries you buy at the hardware store for $15 are alkaline batteries. These batteries come in different sizes and with different voltage levels, the most common of which are designated AA, AAA, C, D, and 9-volt.

Primary batteries are cheap, and are used in flashlights, TV remotes, toys, and consumer electronics.

Secondary batteries are rechargeable. The initial cost of these batteries is usually higher than with primary batteries, but they begin to have a significant economic advantage in power-hungry applications that would rapidly consume alkaline batteries.

The most common type of secondary battery is the lead-acid battery. The lead-acid battery is the oldest type of rechargeable battery, found in most of the world’s automobiles. It is relatively low-cost and reliable, but it has the lowest energy to volume and energy to weight ratio of the major types of secondary batteries. This makes it popular for energy storage applications in which weight and space aren’t a major concern — like backup power for solar photovoltaic systems. But for mobile applications that rely heavily on battery power, the lead-acid battery is being rapidly superseded by newer battery types.

The lithium-ion battery has emerged as the most serious contender for dethroning the lead-acid battery. Lithium-ion batteries are on the other end of the energy density scale from lead-acid batteries. They have the highest energy to volume and energy to weight ratio of the major types of secondary battery. That means you can pack more energy into a smaller space, and the weight will also be lower.

Lithium-ion batteries are still new compared to lead-acid batteries. The downside for them had been cost, but those costs have plummeted over the past decade, and are projected to continue declining.

READ  An extra 259 billionaires were created in China in 2020, more than the rest of the world combined, as the Communist country's economy outpaced all among the pandemic.

The other two major types of secondary batteries are nickel-based, and both fall between lead-acid and lithium-ion in terms of energy density. The nickel-cadmium battery (Ni-Cd battery) uses nickel oxide hydroxide and metallic cadmium as electrodes. Ni-Cd batteries are great at maintaining voltage and holding charge when not in use. But these batteries are well-known for “memory” effects that take place when a partially charged battery is recharged. This degrades the capacity of the battery over time.

Ni-Cd batteries were once popular in portable power tools and portable electronic devices. But nickel-metal hydride (Ni-MH) batteries have largely supplanted them in these applications due to lower costs and higher energy density. In addition to having up to three times the capacity of a Ni-Cd battery of the same size, Ni-MH batteries don’t have the “memory” effect of Ni-Cd batteries.

It can be difficult, given the increasing number of battery options, to determine the best type of battery for your application. Some important considerations are energy density, power density, cost, cycle life durability, voltage, and safety.

These considerations generally involve trade-offs. Ideally, a battery would possess high energy and power density, and good durability — at a low price. In reality, consumers have had to pay a premium for batteries with greater energy density. But that is changing.

Research organization BloombergNEF reported that the volume-weighted average lithium-ion battery pack price (which includes the cell and the pack) fell 85% from 2010-18, reaching an average of $176/kWh. BloombergNEF further projects that prices will fall to $94/kWh by 2024 and $62/kWh by 2030. That would reflect a 95% price decline over the course of 20 years. In comparison, lead-acid battery packs are still around $150/kWh, and that’s 160 years after the lead-acid battery was invented.

Thus, it may not be long before the most energy-dense battery is also the cheapest battery. That has enormous implications for the future of lead-acid batteries.

Another important consideration is a battery’s capacity. The capacity defines the run-time of the battery, which reflects the discharge current the battery can provide until it needs recharging.

The energy content of a battery is obtained by multiplying the battery capacity in ampere-hours (Ah) by the voltage to obtain watt-hours (Wh). Two batteries can have the same Ah capacity, but if one has a higher voltage it will have more energy.

These are important concepts to understand if you are trying to decide on a battery to power a flashlight versus one to power a forklift.

As the battery is discharged, it will have to be recharged. The cycle life durability of a battery defines the stability of the battery through repeated cycles.

Finally, the operating environment of the battery needs to be considered. High or low temperatures, for example, can impact a battery’s performance and safety.

READ  SHOCKING NEWS FROM THE WORLD OF SCIENCE: Almost 40% of university students surveyed are addicted to their phones.

Over the next few years, many companies are going to grapple with the decision of whether to transition their applications from lead-acid to more modern battery types. There are several economic considerations, which can be demonstrated with a case study.

Tim Karimov, who is the President at California-based lithium-ion battery supplier OneCharge, has said their customers show “the total cost of ownership for Li-ion averages 20% to 40% lower in just 2 to 4 years.” 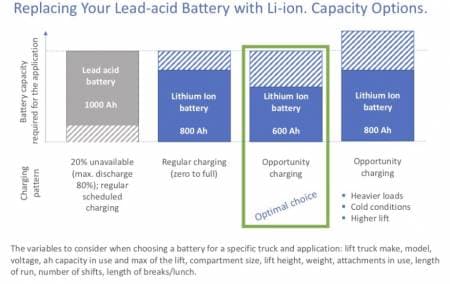 For example, the company cites a recent case study in which a customer was able to reduce the number of lift trucks they had on hand from 17 to 12 by switching from lead-acid batteries to lithium-ion batteries — primarily because of opportunity charging.

Thus, even though the price for capacity is higher for lithium-ion batteries, the fact that you need less capacity lowers the lithium-ion premium (which, according to BloombergNEF, likely won’t be a premium for much longer).

Karimov cites additional savings from a case study from a fruit-growing, packaging and shipping operation with 2 shifts and 30 trucks:

But as the price of lithium-ion continues to fall, the economic case will be compelling just on the price of the batteries. When that happens, the age of lead-acid batteries will come to an end.