The obsession with climate change and the manipulated models they have put forth that only look at data post-1850 is interestingly fulfilling our model that China will become the financial capital of the world. The billionaires pushing this agenda and the hair-brain ideas behind the Great Reset undermine the Western economy and our very culture. The woke movement is further dividing the people as everyone seems to be offended by something. What builds a civilization is much like a relationship between a husband and wife. As long as it is mutually beneficial, the relationship flourishes. As soon as each only looks for themselves, divorce becomes inevitable. This is what the woke movement is doing — dividing the people and that eliminates the mutual benefit of remaining together as a nation-state or civilization.

China will NOT join the West in destroying its economy to BUILD BACK BETTER. In fact, Su Wei, Deputy Secretary-General of the National Development and Reform Commission, said that “Because renewable energy (sources such as) wind and solar power are intermittent and unstable, we must rely on a stable power source … We have no other choice. For a period of time, we may need to use coal power as a point of flexible adjustment.” 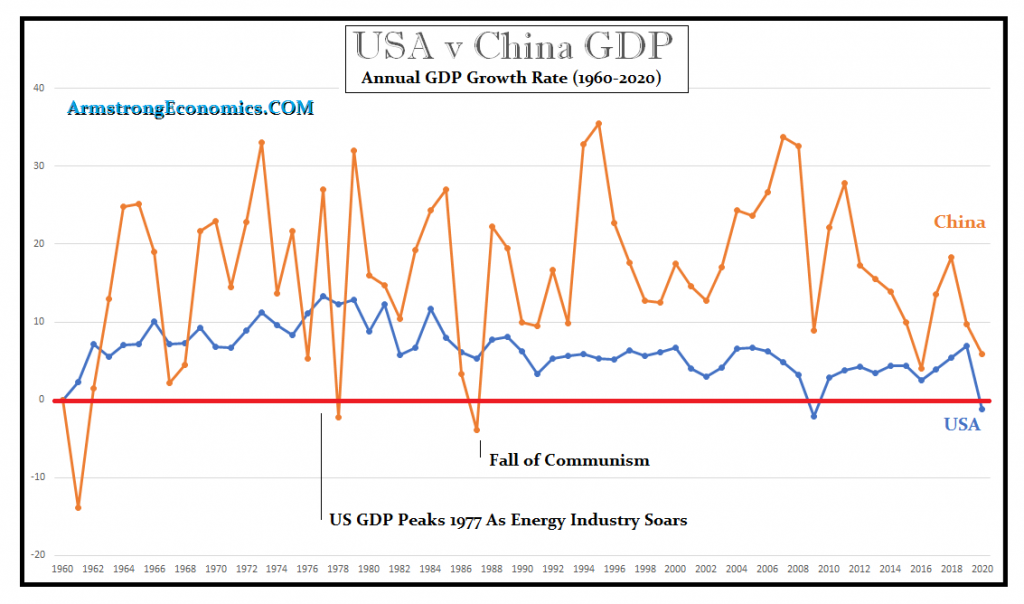 China will NOT follow this woke movement, but it will also pay only lip-service to this Great Reset and BUILD BACK BETTER agenda. The collapse of communism in 1989 was economically driven. Once Bretton Woods collapsed, China was forced to deal with the real world. The USA peaked in 1977, initially benefiting itself from the sharp rise in energy. China has posted positive economic growth since the fall of communism, whereas the United States plunged negatively during the 2007-2009 Financial Crisis, and once again thanks to the manufactured COVID Financial Crisis. This BUILD BACK BETTER agenda will permanently dismantle the Western economy and transfer economic growth and innovation to China.

So when we look ahead at the markets, we must change the way we see the world, for it is changing.