More than just a few “fallen angels.”
By Don Quijones, Spain & Mexico, editor at WOLF STREET.
As part of its QE operations, the ECB continues to pour billions of freshly created euros each month into corporate bonds – and sometimes when it buys bonds via “private placements” directly into some of Europe’s biggest corporations and the European subsidiaries of non-European transnationals. Its total corporate bond purchases recently passed the €100 billion threshold. And it’s growing at a rate of roughly €7 billion a month. And it’s in the process of becoming the biggest “bad bank.”
When the ECB first embarked on its corporate bond-buying scheme in March 2016, it stated that it would buy only investment-grade rated debt. But shortly after that, concerns were raised about what might happen if a name it owned was downgraded to below investment grade. A few months later a representative of the bank put such fears to rest by announcing that it “is not required to sell its holdings in the event of a downgrade” to junk, raising the prospect of it holding so-called “fallen angels.”
Now, sixteen months into the program, it turns out that the ECB has bought into 981 different corporate bond issuances, of which 34 are currently rated BB+, so non-investment grade, or junk. And 208 of the issuances are non-rated (NR). So in total, a quarter of the bond issuances it purchased are either junk or not rated (red bars): 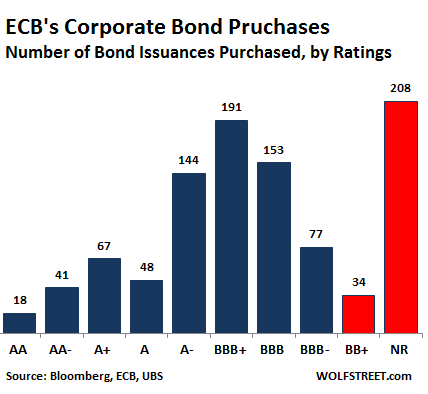 The ECB initially said it would only buy bonds that are “rated” — and rated investment grade. Thus having a quarter of the bonds on its books either junk or not rated represents a major violation of that promise.
The ECB is clearly loading up on risk and possibly bad credit that Draghi’s successor is going to have to eat at some point further down the road. Already home to hundreds of billions of euros worth of artificially low-yielding peripheral sovereign bonds, the ECB is becoming a dumping ground for risky corporate debt that is paying super-low yields.
Under Draghi’s tutelage the ECB has morphed into the world’s biggest bad bank with over €4.23 trillion in “assets,” including:

It’s difficult to know which companies are benefiting the most. The ECB has refused to reveal details, divulging only the International Securities Identification Number (ISIN) of the bonds, but not the amounts.
When the ECB buys these bonds, it inflates the bond prices and pushes their yields down, which is the purpose, and it thus lowers the cost of capital for these companies even further. Yet according to the EU’s Competition Commission, none of this constitutes unfair competition.
The European Parliament is not so sure. A cross-party group of members recently wrote to Draghi, asking for company-by-company disclosure of the securities being bought and the size of each holding, so that it can dispel any concerns that the purchases may be benefiting a small group of favored companies. As the FT reports, the letter warns that since its implementation the QE program has “spurred a certain level of concern, since it can be perceived as a disguised subsidy to certain companies.”
Its not just the opacity, arbitrariness, or the potential for conflicts of interest that are worrisome about the ECB’s QE program; so, too, is the level of dependence it has spawned among national governments and corporations for virtually free money. As much as Draghi may want to further taper the ECB’s monthly purchases of bonds after reducing them from €80 to €60 billion earlier this year, many of the program’s beneficiaries are quite simply no longer ready to go it alone. Draghi’s home country of Italy, in particular, cannot afford the higher interest rates that would result from reduced bond purchases. Higher rates would bankrupt the country. In that respect, Italians see Draghi as their guardian angel at the ECB.
Likewise, many of the companies that have benefited from the ECB’s lavish support over the last 16 months may find life somewhat tougher once the punch bowl is taken away and the price of borrowing from the market returns to some semblance of reality. Until that happens, those companies will continue to wet their beak in the fountain of virtually free money, while the ECB’s balance sheet grows bigger and uglier by the month. By Don Quijones.