Hawaii’s Kilauea volcano is now threatening to destroy more homes, forcing the authorities to order a mandatory evacuation for additional neighborhoods. There’s no telling when the volcano will finally stop, but it has already destroyed 82 structures. That means we will have to wait assess the final cost of damages, but it got us thinking about the most expensive natural disasters in American history. 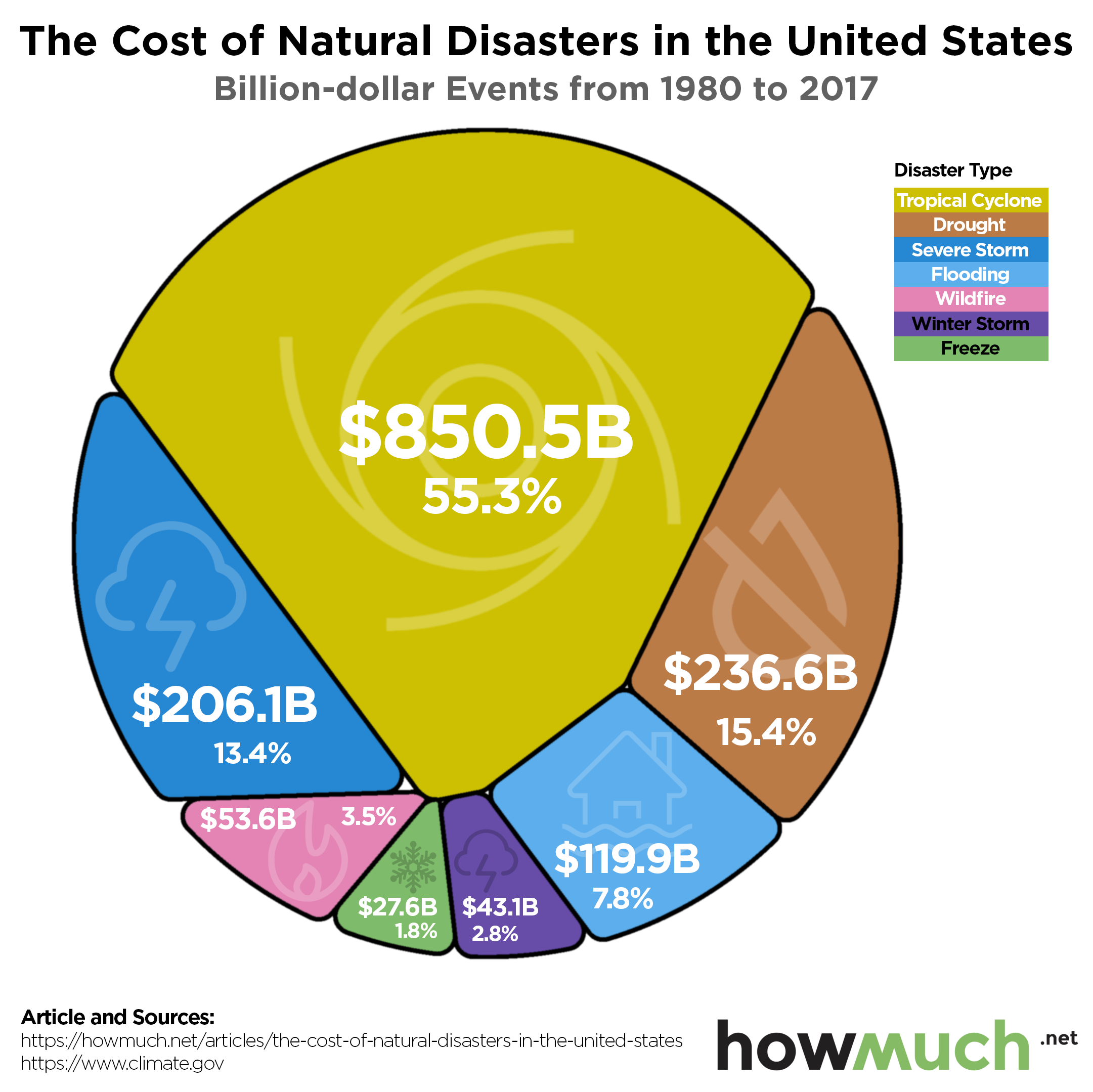 We found the numbers for our visualization from the National Oceanic and Atmospheric Administration (NOAA), which tracks the frequency of natural disasters, their total property damage and the resulting number of deaths. The numbers represent cumulative damage from each category of natural disaster between 1980 to 2017. NOAA has its own sophisticated methodology for how it accounts for these figures. They include both insured and uninsured losses that would not have happened had such an event not taken place. Of course, there’s considerable uncertainty involved in any such counterfactual estimate, but the research is backed by career scientists and economists with a sophisticated understanding of statistics. See here for a detailed description of NOAA’s methodology.

Our Voronoi diagram actually tells a compelling story. For starters, hurricanes loom large as the catastrophic events causing by far the most damage over the last 37 years, totaling an astonishing $850.5B. Hurricane season is upon us again, and sure enough Hurricane Florence has the Carolinas in its crosshairs this week. And let’s not forget Hawaii, which just got through Hurricane Lane and is now facing another tropical storm in Olivia. The City of Houston meanwhile is still struggling to recover from an insane amount of damage from Hurricane Harvey. All of this suggests that hurricane damage has been and will continue to be a perennial challenge in the US.

READ  The Illusion Of Soaring Savings Amid Rising Economic Uncertainty

One surprise in our visualization is how small the damage caused by wildfires ($53.6B) is compared to droughts ($236.6B). The media spends a significant amount of time covering fires, and rightly so—they are truly terrifying events to witness. California is still suffering from the Mendocino Complex wildfire, the largest ever. A separate fire even closed Interstate 5, forcing truckers to abandon from their vehicles. To put it crudely, crops withering in the field isn’t as compelling of a story as compared to the dramatic photos of houses bursting in flames.

Want to learn more? Check out our other visualization covering the most expensive natural disasters in the US over the last 40 years.