“The West is in danger, but we can still prevail. We begin the struggle by standing up for our values and telling the truth about Islam. Even when we are insulted, harassed and intimidated, even when we are marked for death just for stating an opinion, we must never be silenced.” – Geert Wilders Geert Wilders just Tweeted the new cover of TIME Magazine : He’s got Momentum – May the Netherlands be graced by the power of Lord Kek #NEXIT

Sweden in a nutshell 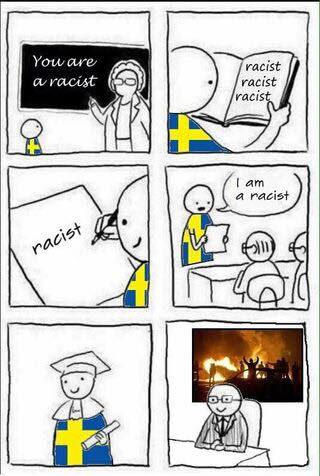 THE EU IS CANCER – Hungary Ordered To Pay Refugees Almost 19,000 Euros Each ($20K USD) For Keeping Them In Processing Zone Before Allowing Into Country. COMPLETE BULLSHIT.

Back in the 13th century, Hungary was at the front lines of the Golden Horde’s invasion into Europe. It is widely believed that their transformative defensive tactics of building walled cities helped fend off the Mongolians — saving the rest of Europe from an eventual Mongolian occupation.
Fast forward to today, there is a similar invasion taking place, this time from the middle east. To defend the people of Hungary, the country has set up transit zones in order to properly vet migrants — before releasing them.
Hungary’s PM, Viktor Orban, is on record saying he didn’t want more muslim refugees in Hungary — explaining how the muslim invasion represented a tangible threat to Christian dominated Europe.
In a speech given a little more than a year ago, Orban laid out his grievances — calling the EU the ‘enemies of freedom.’
In a referendum vote in late 2016, 98% of Hungarians voted against EU migrant quotas. PM Orban said “Hungary voted to keep its freedom, its right to decide who we want to live together with, and we decided that we won’t give this right to Brussels. We can be proud that Hungarian people were the first to be given the right to express their opinion on Brussels politics.”
Establishing the fact that Orban and the EU were at an impasse, we’re now led to the European Court of Human Rights at Strasbourg, France — who just ruled that Hungary violated the human rights of two migrants who filed suit. Moreover, they ordered Hungary to pay them, mind you, 10,000 euros a piece PLUS another 8,705 euros to cover their fucking expenses.
What did the court say Hungary did?

See also  Energy crunch in Europe: Households now pay double the price for electricity in Spain. Power prices hit this week records in the UK, Germany, and France, too
See also  A letter on the SEC’s WEBSITE begging them to do their job in 2008, calling out naked shorting, FTDs, cellar boxing, and even suggesting the Secret Service get involved since it constitutes counterfeiting...
851 views