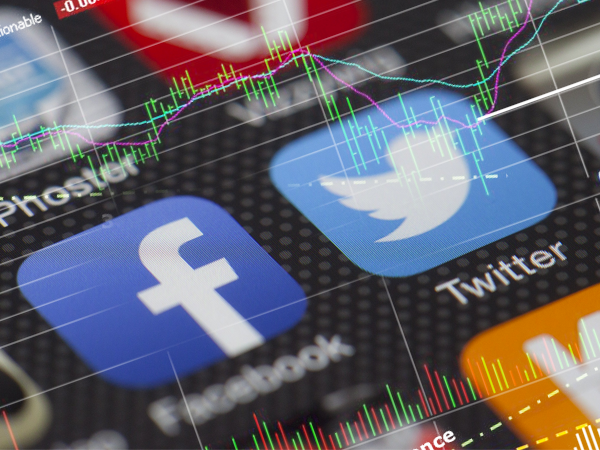 However, this period of “rising tides” looks to be coming to a rapid close, and may bring harsh economic consequences, because it might have just been an illusion.

On July 25th, Facebook’s stock price was sitting at a comfortable $217.50 per share prior to its quarterly update.

Then, it announced poor earnings, slowing growth, and a loss of users. This trifecta spooked investors, and the stock dropped an incredible 21.4% overall. It closed at $171.06 on Monday the 30th.

The 1-month NASDAQ chart below shows the big drop: 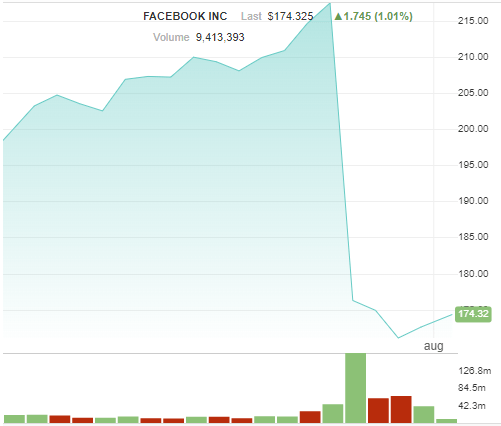 This drop wiped out a historic $100+ billion in wealth, and lost more in one day than the entire value of Goldman Sachs, Lockheed Martin, or Costco according to the Washington Post.

During this same period Mark Zuckerberg lost more than $15 billion in personal net worth. That’s a pretty big hit for a billionaire.

But more importantly, hundreds of billions in shareholder wealth went up in smoke almost instantly. Yet somehow, Facebook is still operating.

And they aren’t alone.

In a July 25th earnings report, Twitter reported a loss of 1 million active users since the first quarter of 2018. 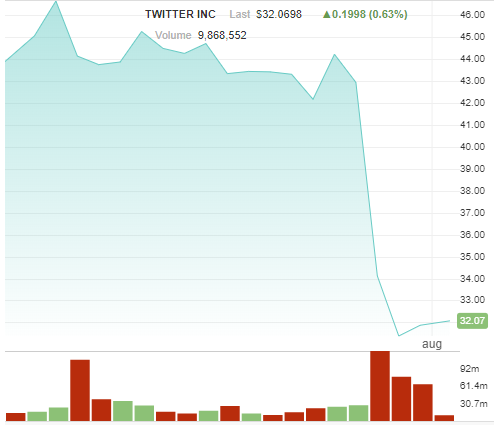 As of this writing, Twitter’s stock climbed a tiny bit, but started tanking again. One of the reasons for the stock’s drop could be a “shadow banning” controversy.

See also  Markets are pricing in a huge recession and crisis ahead (6-12mo lag). It's a bear market rally driven by moronic retail investors and FOMO, fear of missing out on the recovery

That’s two out of the five FAANG companies, and Netflix looks to be joining the party, revealing a big problem with the market.

Netflix Tumbles – Lands on a Cushion of Imaginary Value

According to Business Insider, Netflix’s share prices dropped 20.5% since a high on June 21st.

In the same report, Michael Pachter said Netflix was in a “vicious spiral to the bottom in content spend.” This stock drop now puts the company in a bear market.

These companies have been pushed to absurd limits.

Netflix is always a great example: the company loses billions of dollars each year and burns through shareholders’ money, yet the market has constantly pushed its stock to new heights.

Then one day Netflix reported less-than-stellar growth, and the stock tanked. Poof. Billions of dollars of shareholder wealth vanished in an instant.

With three out of the five FAANG companies rapidly dropping stock value, what’s supposedly propping up the U.S. stock market may be crumbling.

That’s a big problem with the market.

These brand names and the ideas that support them aren’t worth near what their stock values suggest. It certainly seems like a corporate sleight of hand may be at work.

And only in some “Bizarro World” can an idea inflate a stock value so high that it could lose billions of shareholder wealth in a nanosecond, yet these companies survive.

Sounds more like an illusion than an accurate valuation based on gross sales, revenue growth, and profitability.

If that is what is propping up the economy right now, then when the illusion disappears, we should get our money back. But that’s not likely to happen.

Make Sure Your Portfolio Has a Real “Cushion” of Value

There’s a lot of “fat” in these FAANG company stocks right now. When the market tanks and makes these companies go on a “diet,” what happens to all that wealth?

POOF! That’s what happens. That’s why now would be a good time to make sure your portfolio has a real cushion of stored value to land on.