When a horse race is fixed like a merry-go-round, it is apparent to even the most inebriated observer in the racetrack grandstands.  No binoculars are necessary to see through the charade.  A merry-go-round fix is the most brazen scam that can occur at a racetrack. When the horses leave the starting gate, they line up against the rail in a pre-determined order.  The horses then maintain that order over the course of the race and pass the finish line in the same sequence they started out.  There is no jockeying for position.  All the positions are pre-set from beginning to end; hence, the term merry-go-round.

Of course, law enforcement officials would also observe what occurred and would commence an investigation, interviewing the jockeys and the owners to find out who paid them to fix the race.  The problem is the crooks who fixed the race will have already cashed in their winning tickets and absconded with their ill-gotten gains.  The investigation takes place after the fact.  The horses are already out of the barn.

We have a similar situation in the stock market.  It is one of the longest running merry-go-rounds ever.  The payouts are enormous but law enforcement is conspicuous by its absence.  The merry-go-round keeps spinning in a circle (the market trend stays up and to the right as shown on the chart below), the horses stay in the same positions (individual stocks all join in upward trend), and the horses go up-and-down vertically (analogous to the daily fluctuations in the market), just like they do at an amusement park.  The only thing missing is the music (which is another bonus considering the typical carousel organ music that accompanies a merry-go-round ride).  Riders, in the form of investors, don’t even have to reach for a prize brass ring.  Multiple rings, in form of easy gains, just drop into their laps 24/7/365.  It’s the greatest show on earth.

At this point in the unrelenting bull market that began in March 2009, many market observers suspect or are convinced that the stock market is rigged.  One only has to look at the chart below to see the strong correlation between growth in the Federal Reserve’s balance sheet and stock prices to know that much, if not all, of the market’s rise is fueled by the Fed.  The Federal Reserve created and propelled the merry-go-round with their Zero Interest Rate Policy and Quantitative Easing programs.  Whether the Fed did so, by design or incompetence, is beside the point.  The result is the same.  The stock market is in lock-step with the growth of the Fed’s expanding balance sheet.  It is no longer a conspiracy theory; it is a conspiracy fact.  It’s either a conspiracy of wise guys on the Fed who work for the benefit of their wealthy benefactors or it’s a conspiracy of dunces who can’t find their ass with both hands and a flashlight.  Either way, the integrity of our marketplace has been undermined.

See also  HR 1808, The federal "Assault Weapons" ban has passed committee and is eligible for vote on the house floor 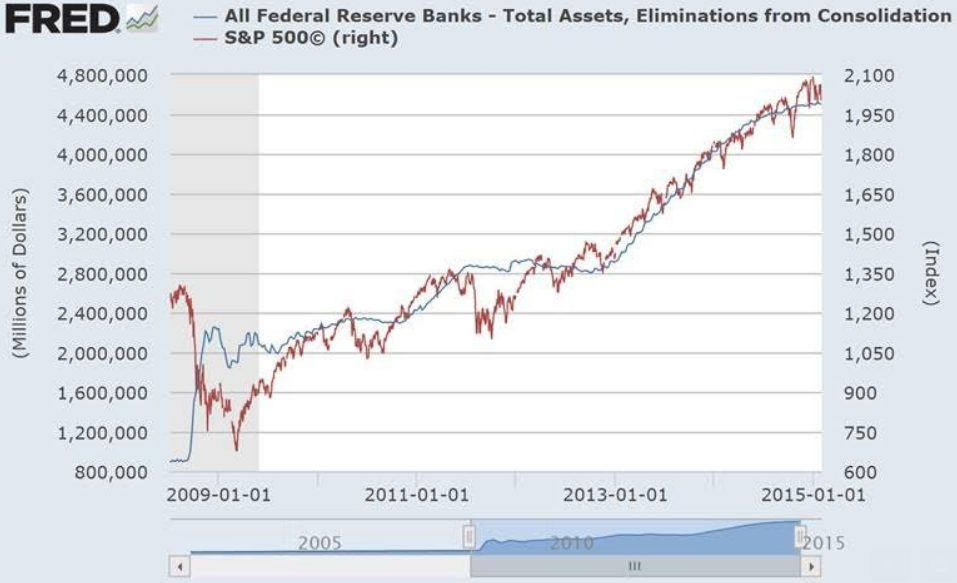 The wealthiest individuals, who have the most money invested in the stock market, are enjoying windfall profits.  For them, the market has become an embarrassment of riches, compliments of the Federal Reserve.  It is also true that many individuals of lesser means, who have invested in mutual funds through their 401k plans or other methods, have enjoyed the ride as well.  But the ends don’t justify means in what is supposed to be a fair and open marketplace.

The question is whether the control mechanism that powers the merry-go-round will break down or slow down or come to a stop.  Or maybe, it will reverse direction for some reason or other.  The problem is the market should have never been allowed to become a carousel ride in the first place.  Our financial markets are supposed to be based on the principle of supply and demand, where fair price discovery is its primary function.  The Federal Reserve shouldn’t be allowed to print money out of thin air so that a large chunk of it finds its way into the stock market pushing prices way beyond their fair value.

The Fed can’t be trusted to correct the problem it created.  And the Fed isn’t about to admit it made any mistakes.  Or take even the smallest baby steps to correct the problem.  They can’t even find the courage to raise the federal funds rate a measly quarter of a percentage point for fear that it bring down the market and the economy along with it.

Obviously, the Fed cannot police themselves.  They don’t even want anyone looking at their books, in the form of a comprehensive audit.   Congress won’t take any action.  So, the Fed is home free to do as it pleases.  And, apparently, that means keeping the carousel running. The few minor reverses that are permitted to occur are more like pauses to refresh of short duration — short enough to allow those, so inclined, to get off their horses with their pockets bulging with money.

See also  US Strategic petroleum reserve lowest since 1985 May

So, who cares?  Sadly, the answer is no one who has the power to do anything about it.  After all, who shoots horses, even if they are a herd of horses on a carousel ride?  Let them run free, as long as they keep their place in line and gallop toward ever increasing profits.

One of the laws of thermodynamics is entropy.  Entropy is the natural tendency to seek chaos or disorder. Entropy is a lack of order or predictability.  It takes energy to prevent entropy and impose order; just like it takes energy in the form of printed fiat money by the Fed to fuel an orderly market rise over a long period of time.  Without that influx of printed money, the market would revert to the forces of supply and demand and would be allowed to seek its own level.  The excesses caused by aberrant Fed policies would be wrung out of the market.