As was true in January and February, we’re having to operate here in July on incomplete information concerning re-infections. Why? Simple numbers.  If it takes 3-6 months for one’s antibodies to wane enough for re-infection to be ‘a thing’ AND someone has to be exposed again (when a low percentage of the population is infected at all), then we’re scraping around in a very shallow barrel of possible subjects.

Consider that in March 23rd there were only 100k that had ‘recovered.’ 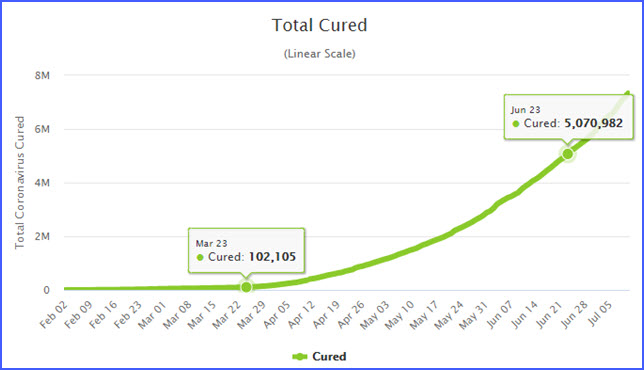 No, there’s nothing special about March 23rd, I was just trying to find out when 100k people had recovered so we could start the clock for the pool of people who might be candidates for re-infection here ~4 months later.

Presumably that 100k cohort is much less susceptible to being re-infected.  First because some number of them have long(er) lasting immunity.  Second because we might guess they’d be a bit more careful like this person:

We’re going to be searching for a relatively small group of people here in the US.

Those stories are surprisingly easy to find.  Here’s one, with testing.

“Wait. I can catch Covid twice?” my 50-year-old patient asked in disbelief. It was the beginning of July, and he had just tested positive for SARS-CoV-2, the virus that causes Covid-19, for a second time — three months after a previous infection.

While there’s still much we don’t understand about immunity to this new illness, a small but growing number of cases like his suggest the answer is “yes.”

Covid-19 may also be much worse the second time around. During his first infection, my patient experienced a mild cough and sore throat. His second infection, in contrast, was marked by a high fever, shortness of breath, and hypoxia, resulting in multiple trips to the hospital.

Recent reports and conversations with physician colleagues suggest my patient is not alone. Two patients in New Jersey, for instance, appear to have contracted Covid-19 a second time almost two months after fully recovering from their first infection. Daniel Griffin, a physician and researcher at Columbia in New York, recently described a case of presumed reinfection on the This Week in Virology podcast.

It is possible, but unlikely, that my patient had a single infection that lasted three months. Some Covid-19 patients (now dubbed “long haulers”) do appear to suffer persistent infections and symptoms.

My patient, however, cleared his infection — he had two negative PCR tests after his first infection — and felt healthy for nearly six weeks.

The emerging long-term complications of Covid-19, explained
I believe it is far more likely that my patient fully recovered from his first infection, then caught Covid-19 a second time after being exposed to a young adult family member with the virus. He was unable to get an antibody test after his first infection, so we do not know whether his immune system mounted an effective antibody response or not.

Regardless, the limited research so far on recovered Covid-19 patients shows that not all patients develop antibodies after infection. Some patients, and particularly those who never develop symptoms, mount an antibody response immediately after infection only to have it wane quickly afterward — an issue of increasing scientific concern.

What’s more, repeat infections in a short time period are a feature of many viruses, including other coronaviruses. So if some Covid-19 patients are getting reinfected after a second exposure, it would not be particularly unusual.

Also troubling is that my patient’s case, and others like his, may dim the hope for natural herd immunity. Herd immunity depends on the theory that our immune systems, once exposed to a pathogen, will collectively protect us as a community from reinfection and further spread.

So, yes, a second infection is ‘a thing.’

However I am, again, operating on thin information and making my best assessment of what’s available to analyze.  Such is the nature of the honey badger virus.

One of these days I’ll get something big wrong, but so far my ability to parse the early data has been accurate.

The reason this is so important is because of the fact that my country has gone bonkers and is unable to process the logic behind masks or ‘endure’ a proper lockdown period.  You know, gray hair roots, and the need to attend a buffet or a Disney ride and all that.

Which means herd immunity is the only way out of this nightmare.  And reinfections imply that herd immunity isn’t going to be ‘a thing’ which then implies that we either live with the nightmare possibility of being laid out by a super flu that can whollop us 2 times per year with the potential for life-long damage, or we actually go hard and lockdown for long enough to beat this thing (like China, Taiwan, Hong Kong, and so many other countries have actually done).

Either way, the hit to the economy hasn’t really begun.  If what I’ve laid out for reinfections is actually ‘a thing.’  Which I think it is.