Theoretically, two lone nuclear reactors running on small pellets could power the entire planet, safely and cleanly. That’s the promise of nuclear fusion. So, why are we still relying on fossil fuels?

For decades, scientists have viewed nuclear fusion as the Holy Grail for clean, abundant and sustainable power. Based on the same principle that powers the stars, including our own sun, a couple of nuclear reactors running on small pellets could power our planet without the risk of a catastrophic meltdown and zero greenhouse gas emissions.

Still, we depend on fossil fuels for 80% of our energy needs.

So, what’s stopping us from building these reactors everywhere?

After all, scientists have been working on nuclear fusion technology since the 1950s and have always been optimistic that the final breakthrough is not far away. Yet, milestones have fallen time and again and now the running joke is that a practical nuclear fusion power plant could still be decades away.

Well, you can blame some kinky laws of physics for this sad state of affairs. 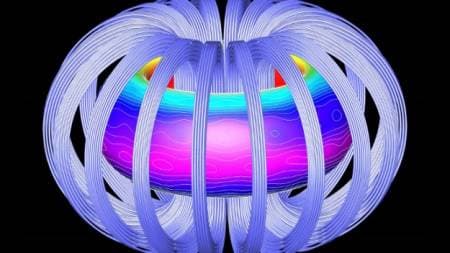 It turns out that the conditions necessary for nuclear fusion to take place present an extreme challenge for us earthlings.

Fusion works on the basic concept of forging lighter elements into heavier ones. When two hydrogen atoms are smashed together hard enough, they fuse to form helium. The new atom is less massive than the sum of its parts, with the balance converted to energy in the E=MC2mass-energy equivalence.

Ok, that’s a bit simplistic since hydrogen atoms do not fuse together directly but rather in a multi-step reaction. Anyway, the long and short of it is that nuclear fusion produces net energy only at extreme temperatures – in the order of hundreds of millions of degrees celsius. That’s hotter than the sun’s core and far too hot for any known material on earth to withstand.

To get around this quagmire, scientists use powerful magnetic fields to contain the hot plasma and prevent it from coming into contact with the walls of the nuclear reactor. That uses a lot of power.

Stars have it easy in this regard because their ludicrously powerful gravitational fields hold everything together.

Unfortunately, every fusion experiment so far has been energy negative, taking in more energy than it generates thus making it useless as a form of electricity generation.

Getting the initial fusion reaction is not a problem – keeping it going is, not to mention that building nuclear reactors takes some extremely sophisticated feats of engineering.

But now scientists are confident that they are close to building a nuclear reactor that will produce more energy than it consumes.

Funded by six nations including the US, Russia, China, Japan, South Korea and India, ITER plans to build the world’s largest tokamak fusion device, a donut-shaped cage that will produce 500 ME of thermal fusion energy.

The device will cost ~$24 billion with a delivery date set at 2035. The giant machine – the biggest fusion machine ever built –  will weigh in at an impressive 23,000 tonnes and will be housed in a building 60 meters high. 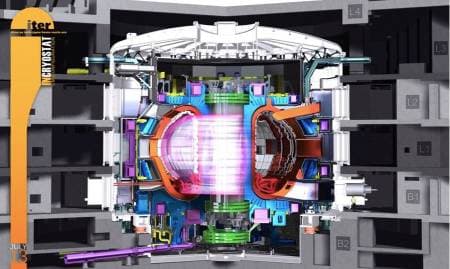 So, what’s different this time around?

Scientists have successfully developed a new superconducting material – essentially a steel tape coated with yttrium-barium-copper oxide, or YBCO, which allows them to build smaller and more powerful magnets. This lowers the energy required to get the fusion reaction off the ground.

According to Fusion for Energy – the EU’s joint undertaking for ITER – 18 niobium-tin superconducting magnets aka toroidal field coils will be used to contain the 150 million degrees celsius plasma. The powerful magnets will generate a powerful magnetic field equal to11.8 tesla, or a million times stronger than the earth’s magnetic field. Europe will manufacture 10 of the toroidal field coils with Japan manufacturing nine.

However, it will be another decade before a full-scale demonstration power plant will be built using lessons learned from ITER. The industrial fusion power plants will thereafter be connected to the grid.

ITER, however, is not the only fusion energy player on the scene. Commonwealth Fusion Systems is collaborating with MIT to build its fusion reactor. The team has planned a fusion experiment they have dubbed called Sparc which is about 1/65th the volume of ITER. The experimental reactor will generate about 100MW of heat energy in pulses of about 10 seconds – bursts big enough to power a small city. The team anticipates that the output will be more than twice the power used to heat the plasma thus overcoming the biggest technical hurdle in the field: positive net energy from fusion.

The other good news: the Sparc team has set an ambitious target to have the reactor running in just 15 years.