Few conventional-media commentators are willing or able to discuss these factors in the labor shortage / declining participation trends.

“Here’s a sample of billboards in upstate South Carolina, a heavily industrialized area along I-85:

MAU (staffing firm) – $18.50 & up for forklift operators; they have 3,000+ students in industrial skill training courses in GA/SC/NC/AL

every trucking firm & almost every business has a banner in their front yard saying “WE’RE HIRING”.

There are numerous theories about the causes of labor shortages and the lack of wage pressure. One reality Harvey described in his email is the difficulty small businesses have in raising wages as 1) the cost of benefits such as healthcare insurance skyrocket, pushing total compensation costs higher even if the wages employees see remain the same and 2) the difficulty in passing on higher labor costs.

Few small businesses are monopolies; if prices move up, customers go elsewhere or put off the purchase. Even corporations’ ability to raise prices without losing sales is limited, hence the popularity of reducing quantity (the ever-shrinking serving size) or quality (appliances with inferior components that fail in a few years, etc.) 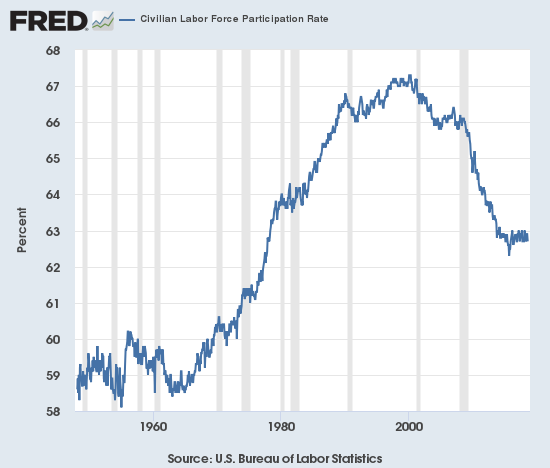 Interestingly, the labor participation rate for women has held steady compared to the entire populace. 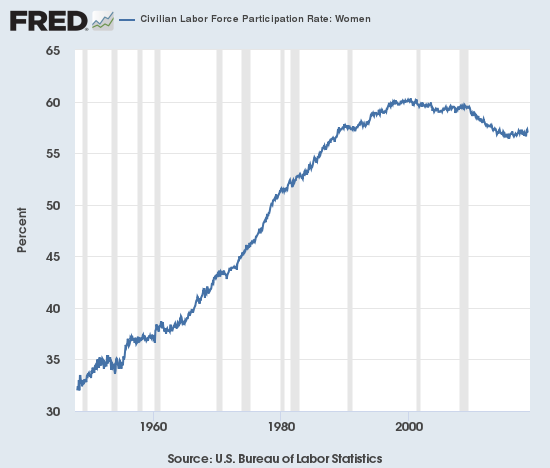 Now compare it to the labor participation rate for men, which has absolutely cratered: 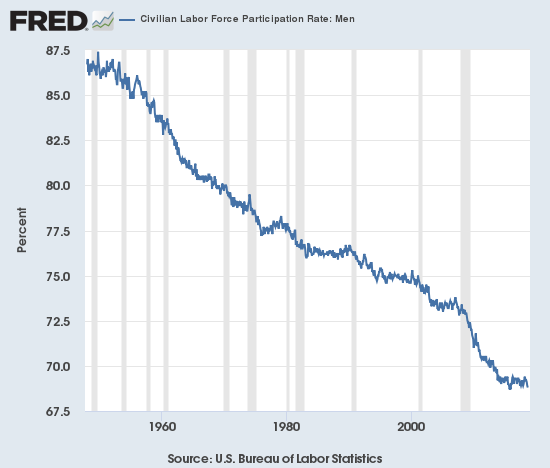 It’s hard to find statistics for many of the dynamics behind the sharp decline of male participation in the official workforce, as few institutions track such trends such as the number of men making a living in the black market. It’s hard to estimate this number and hard to get those engaged in the black market to answer honestly to questions about activities that break laws requiring the reporting of all income, regardless of source.

Despite the lack of statistics, we can assemble some anecdotal factors:

1. Failing the standard employment drug test. Should marijuana use bar all employment? Employers are beginning to question this Drug Gulag Inquisitionassumption. Anecdotally, up to 70% of all applicants fail these drug tests.

3. Pay not worth the trouble. As difficult as this might be for many to accept, a job paying X dollars per hour can be viewed as not worth the trouble if the commuting costs are high, the cost of living near the job is higher, and some other source of lower but still adequate income is available: disability, parents, girlfriend, dealing drugs, working informally for cash, the gig economy, etc.

5. Misplaced sense of pride / dignity. Many tradecraft jobs (welding, construction, etc.) have traditionally provided male workers with strong identities and sources of pride and dignity. That even these jobs are going begging suggests the possibility that at least some males no longer gain the pride / dignity they desire from work, or they’ve surrendered the desire for earning pride / dignity in the workplace: work is for chumps,etc.

This also suggests that some percentage of the male workforce no longer feels the same need as females do to take jobs in the formal economy regardless of the costs and indignities that go with the territory of commoditized work / employment. In other words, opting out of formal employment appears to be much less of an option for women than for men.

Few conventional-media commentators are willing or able to discuss these cultural / financial factors in the labor shortage / declining participation trends. As with so much of American life, the inconvenient realities may upset somebody, so better to stick with magical-thinking or politically-correct truisms that are completely out of touch with reality but oh-so-acceptable to the status quo.

Maybe it’s time for a real discussion of work and employment in a system dominated by mobile capital and self-serving insiders.