The activity/exercise must be enjoyable enough that it doesn’t take a massive application of willpower to make it happen.

While selling health-related “miracle cures” of one kind or another is big business, the real “miracle cure” is activity/exercise. The essential role of exercise/fitness is backed up by a large and growing body of evidence. It’s now apparent that humans are “born to walk” and need to stay active to be healthy: eating well isn’t enough.

If we apply the foundational processes of evolution to our own health, we end up focusing on the critical role of activity/exercise in our well-being–and in particular, the impressive benefits of walking.

This includes the impact of exercise on mental acuity/health, as explained in this article:

“Mounting scientific evidence shows that exercise is good not only for our bodies, but for our brains. Yet, exactly why physical activity benefits the brain is not well understood.

Having this underlying understanding of the exercise-brain connection could help researchers come up with ways to enhance the benefits of exercise even further, and to develop effective interventions for age-related cognitive decline or even neurodegenerative diseases such as Alzheimer’s.”

The link between brain health and exercise is visible in studies of dementia and Alzheimer’s, which have found that a daily walk reduces the risk of developing these disorders.

The other article worth reading is Humans Evolved to Exercise: (Scientific American) Unlike our ape cousins, humans require high levels of physical activity to be healthy– “Exercise is not optional; it is essential.”

This article is behind a paywall but you may be able to find it at your local library. Here are some excerpts:

“Among our primate cousins, we humans are clearly the odd ape out. Somehow humans evolved to require much higher levels of physical activity for our bodies to function normally.

In ecology and evolution, diet is destiny. The foods animals eat do not just shape their teeth and guts but their entire physiology and way of living. Species evolved to eat foods that are abundant and stationary need not roam too far or be too clever to fill up; grass does not hide or run away.

Moreover, hunting and gathering required hominins to work harder for their food. Simply moving up the food chain means food is harder to find; there are a lot more plant calories on the landscape than animal calories. Hunter-gatherers are remarkably active, typically covering nine to 14 kilometers a day on foot—about 12,000 to 18,000 steps.

Although we have long known that exercise is good for us humans, we are only beginning to appreciate the myriad ways our physiology has adapted to the physically active way of life that hunting and gathering demands. Nearly every organ system is implicated, down to the cellular level. Some of the most exciting work in this area has focused on the brain.

Raichlen and his colleagues have shown that our brain has evolved to reward prolonged physical activity, producing endocannabinoids—the so-called runner’s high—in response to aerobic exercise such as jogging. Raichlen and others have even argued that exercise helped to enable the massive expansion of the human brain and that we have evolved to require physical activity for normal brain development. Exercise causes the release of neurotrophic molecules that promote neurogenesis and brain growth, and it is known to improve memory and stave off age-related cognitive decline.

Our metabolic engines have evolved to accommodate increased activity as well. Humans’ maximum sustained power output, our VO2max, is at least four times greater than that of chimpanzees.

But the adaptations to exercise appear to go even deeper, accelerating the rate with which our cells function and burn calories. My work with Ross, Raichlen and others has shown that humans have evolved a faster metabolism, providing fuel for increased physical activity and the other energetically costly traits that set humans apart, including bigger brains.

All of this evidence points toward a new way of thinking about physical activity.

But exercise is not optional; it is essential, and weight loss is probably the one health benefit it largely fails to deliver. Our bodies are evolved to require daily physical activity, and consequently exercise does not make our bodies work more so much as it makes them work better.

Recent advances in metabolomics have shown that exercising muscles release hundreds of signaling molecules into the body, and we are only beginning to learn the full extent of their physiological reach. Endurance exercise reduces chronic inflammation, a serious risk factor for cardiovascular disease. It lowers resting levels of the steroid hormones testosterone, estrogen and progesterone, which helps account for the reduced rate of reproductive cancers among adults who exercise regularly. Exercise may blunt the morning rise in cortisol, the stress hormone. It is known to reduce insulin insensitivity, the immediate mechanism behind type 2 diabetes, and helps to shuttle glucose into muscle glycogen stores instead of fat.

Regular exercise improves the effectiveness of our immune system to stave off infection, especially as we age. Even light activity, such as standing instead of sitting, causes muscles to produce enzymes that help to clear fat from circulating blood.”

As I’ve often noted, the modern lifestyle (financial stress and a crushing commute/workload) and built environment often conspire against regular exercise. The trick is to make exercise a habit as regular as brushing one’s teeth (assuming this is a regular behavior…). How to manage that is highly individualistic; the activity/exercise must be enjoyable enough that it doesn’t take a massive application of willpower to make it happen.

As one last bit of evidence at the “miraculous” powers of exercise, here is an email from correspondent J.F. MD on how exercise helps very elderly people who are ill enough to be a hospital:

J.F. MD: “In-hospital exercise avoids deterioration in patients aged 75 – 101 – this challenges the idea that hospitalized patients should be on rest. This is not rehab after hospitalization – it is exercise while patients are acutely ill, in the hospital.

Excerpt of the research abstract: A moderately challenging exercise program may help elderly patients avoid some of the deterioration associated with acute hospitalization, the authors of a new study write. In a randomized clinical trial of patients ranging in age from 75 to 101 years, an individualized, multicomponent program consisting of resistance, balance, walking, and gait retraining exercises was associated with significant improvements in functional and cognitive status compared with usual care, Nicolás Martinez-Velilla, MD, PhD, and colleagues explain in an article published online November 12 in JAMA Internal Medicine. The traditional model of hospital care for elderly patients, which emphasizes bed rest, is often associated with significant functional decline even after the initial clinical problem has resolved.

This chart from the Bureau of Labor Statistics (BLS) reflects the dominance of staring at screens in our leisure time. I suspect it grossly under-estimates the total time spent being physically inactive as a result of smart phones. 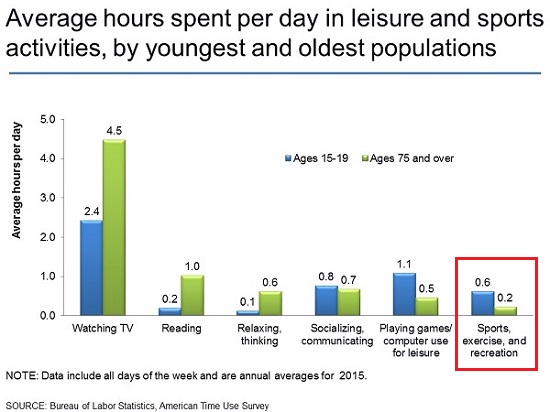