Homeowners insurance is a critical part of financial security, and there’s a lot to consider when shopping around for a provider. On the one hand, the best insurance carriers have the financial strength, customer service and appropriate offering to be there in the event of a catastrophe. And on the other hand, competitive rates shouldn’t break the budget. To that last point, here’s the average cost of homeowners insurance for every state in 2020. 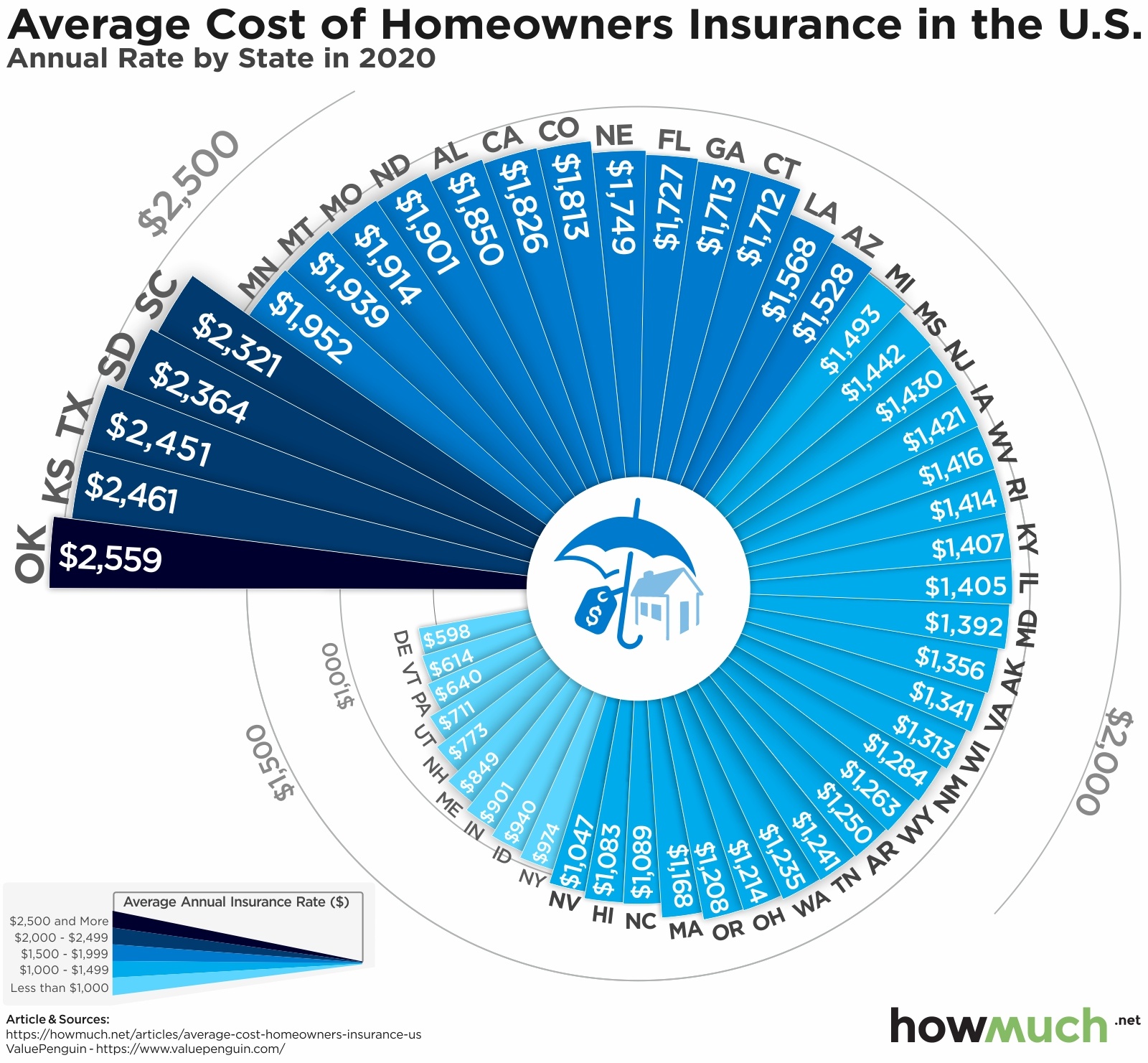 For most people, their home is their most important asset. The only way for a family to financially recover from a home lost to a natural disaster is if it was properly insured. Homeowners insurance is therefore essential for financial security. We found average rates for 2020 in every state at ValuePenguin, a financial education and product comparison website. Visualizing the breakdown for every state in the country lets you easily see if you’re getting a good deal on such a critical part of your personal finances.

States inside Tornado Alley have the highest homeowners insurance rates in the country. Oklahoma stands out as by far the most expensive, coming in at $2,559 on average per year. Kansas and Texas both have high rates as well ($2,461 and $2,451, respectively). These states not only get tornadoes more frequently than elsewhere, but they tend to be significantly stronger as well, topping F3-5 strength ratings. For example, Oklahoma City alone has been struck by two or more tornadoes on the same day 29 times. These factors tend to make homeowners insurance much more expensive.

At the other end of the spectrum, there are a handful of states where it costs less than $1,000 per year on average. Many of these places are clustered in the Northeast, like Vermont ($614), New Hampshire ($773) and Maine ($849). Delaware boasts the cheapest rates in the country at just $598, or about $50 per month. That’s about half as much as the average American spends on a cellphone, according to the latest Bureau of Labor Statistics Consumer Expenditure Survey.

The cost of homeowners insurance falls between these two extremes for most states. In general, most people can expect to pay somewhere between $1,000 to $2,000 for coverage. However, it’s important to remember that homeowners insurance does not typically cover damage from things like floods and earthquakes. Anyone concerned about those types of perils should consider additional types of coverage.