The rise of populism and overall political unrest has many people concerned about future of the Western world. About three years ago, it became clear to me that we were headed down a dangerous and chaotic path. This inspired me to relentlessly pursue a greater understanding of history, specifically what history may be indicating about our future. This article is about the most important “scientific history” theory I have come across: Thucydides Trap.

Thucydides was an Athenian historian and general who lived from 460 BC to 400 BC. During the Peloponnesian War (431 – 404 BC) between the Athenians and Spartans, Thucydides made a startling observation about the nature of warfare. He noticed that when a rising power threatens to displace an established power, war is almost always the result. As he explained in his book History of the Peloponnesian War, “It was the rise of Athens and the fear that this instilled in Sparta that made war inevitable.”

Thucydides’ theory (I.e. Thucydides Trap) has captured the attention of stateman, war strategists and many other great thinkers. Ever since he put his thoughts on paper, Thucydides Trap has been an incredibly accurate predictor of war. Over the past 500 years, there have been 16 instances where a rising power threatened to displace an established power. Out of the 16 instances, 12 resulted in war. 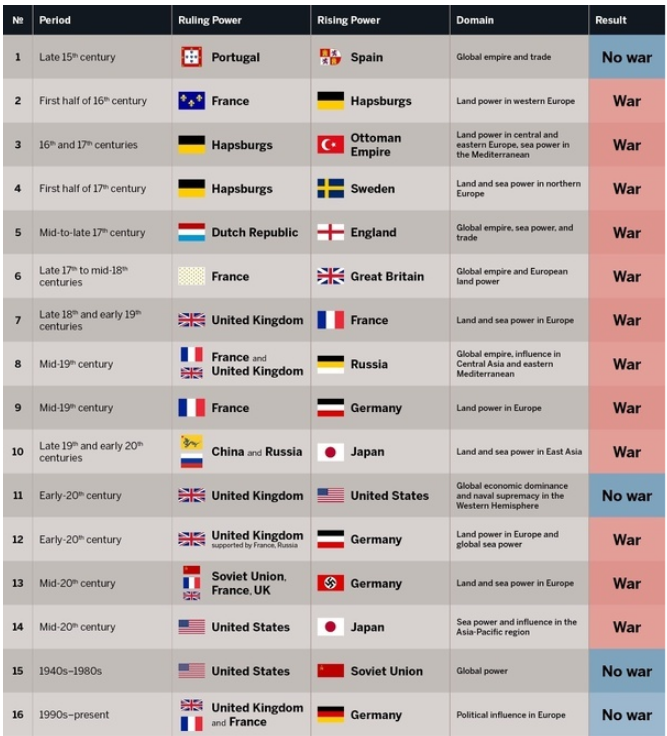 So, why is this theory so important today? Well, we’re about to experience another instance where an emerging power threatens to displace an established power. The US has ruled the world for arguably more than 100 years, but definitely since the end of WWII. For the first time in a very long time, an emerging power (China) threatens to knock the US off its pedestal. We can see China quickly closing the gap in economic size, military strength and overall international influence.

For those that wish to maintain peace, the news gets worse. Physical warfare is often preceded by economic warfare, and the US and China are already fully engaged in the latter. The US has maintained power by establishing the US Dollar as the most used currency in the world. This allows them to print money at will. China is now challenging this system. The US and China are now engaged in a trade (tariff) war as well. It’s hard to know exactly who will benefit most from the trade war in the short-run, but it will surely increase hostilities between the two countries.

If the theory of Thucydides Trap holds true, we are approaching extremely difficult times. Will cooler heads prevail? Will our greatest minds be able to avert such a disaster? Will nukes act as the deterrent we need to avoid lengthy and costly war? We will all find out very soon.