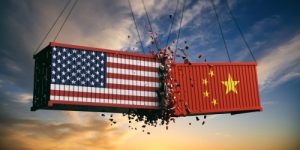 American farmers are struggling to send their goods overseas as the East simply does not want American exports. The Ocean Shipping Reform Act passed in the House last week due to Asian carriers “unfairly decimating against American cargo.” Five major Asian liners have been accused of offloading goods at American ports and returning empty-handed, refusing to take American cargo back with them. The US agriculture industry is highly reliant on California ports that are now described as cargo parking lots as there are not enough workers to offload boats. In addition to these supply chain delays, discrimination against American products is causing countless containers filled with agricultural goods to rot.

“Unfortunately because it’s an oligopoly…. you’ve got to take it or leave it if you’re an American shipper,” Rep. Dusty Johnson noted. “The terms often say that liquidated damages for you canceling a container is $100. Well there can be $100,000 of goods in each container.” Johnson pointed to an issue with a cheese manufacturer in South Dakota who has 2 million pounds of lactose awaiting shipment in a warehouse. That shipment sat on the dock for 75 days, spoiled, and over $25,000 was lost. Johnson also used the example of pork, which is a hot commodity in Asia. Non-frozen pork, in particular, goes for a premium. As a result, producers have been forced to freeze numerous pork shipments to Asia, diluting the profits.

See also  Fleet Of B-52s Recorded Flying Over Long Island Out To The Atlantic Ocean Toward Europe..Something's Up...

The Ocean Shipping Reform Act will go to the Senate before being presented to President Joe Biden. “If you’re going to use this shared infrastructure, you’re going to play fair, and you’re not going to have unprecedented levels of rejection of American cargo – which is what we’re seeing actual rejection a refusal to take this cargo,” Johnson said.