The US propaganda machine, also known as the mainstream media, has been incredibly successful at shaping the thoughts and behavior of the US public. Just think about it. Every war the ruling elites have wanted, they have gotten. The elites have largely gotten the US public to forget about the egregious crimes of the financial institutions as well. They have even been able to maintain a respect for the intelligence community despite all the evidence of crimes and deceit. The media is an incredibly powerful tool, and the elites have used it well.

For decades, the elites were able to get most of their objectives accomplished through one political group: The Neocons. The Neocons were persuaded by feelings of national pride, American exceptionalism, democracy, and a whole bunch of other ultimately hollow platitudes. The elites convinced the Neocons that American authority could do no wrong. They convinced the Neocons to go along with an expansive invasion of the Middle East and a surveillance state at home.

But the Neoconservatism that sustained the mission of the ruling class for decades has finally begun to wither. For example, by 2013, more Americans said the Afghanistan war was a failure than the number of Americans who said it was a success, for the first time since the war started. 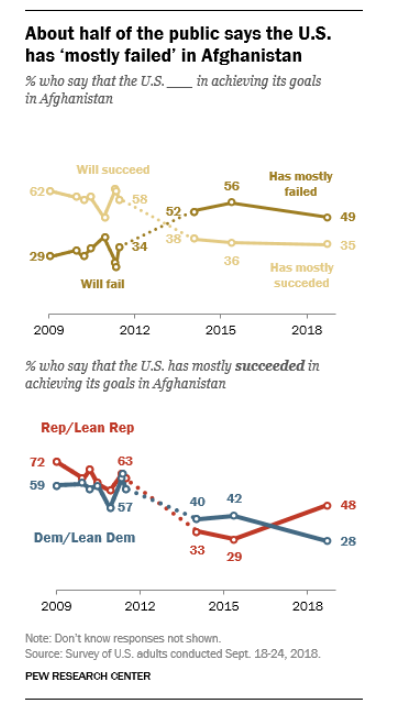 Although more Republicans currently support the war than Democrats, support from both sides has dropped considerably since 2011. And I suspect that many Republicans support the war just because their guy is in office, just as the Democrats supported the war more when their guy was in office. But the point is: the lack of support from both sides is calling into question the legitimacy of the elites’ war.

With Republicans turning to nationalism and Trump (over globalism), the support from their side is likely to remain limited. But, with the rise of the globalist, pro-war left, the elites have found a new party that will carry out their objectives. In fact, the transition is already underway. It’s the Resistance, not the conservatives, who love mainstream media, the intel community, the military industrial complex and whoever else the ruling elites tell them to like.

But don’t take my word for it. Look at the messages spewed out of the mouths of the Resistance leaders:

BOOM! The Republican Senate has broken with Trump in MASSIVE fashion, Voting 68-23, against a quick Syria and Afghanistan troop withdrawal.

The Republican led Senate just voted 68-23 to advance a measure that opposes Trump's attempt to withdraw troops from Afghanistan and Syria.

Another loss for Trump!
Another win for America!

You know, I forgot about #VladimirPutin! He’s probably doing the happy dance right now!! #Trump pleases TWO dictators with one move, bringing home American soldiers from Syria, thereby abandoning #Syria to the #Russians, and the #Kurds to the #Turks!

Looks like withdrawal from Syria is the price #Trump is willing to pay to get the Turks off MSG’s back…oops! There go the Kurds, an old ally of ours whom the Turks fear. Really fear. t.co/m5MStr7hLz

What’s happening in Syria is an abomination. We are allowing Russia and Iran to aid other HITLER. We can not tand by and watch these people being murdered. We can not. I donate to @karamfoundation, but we have to do more.

This is only a small taste of the left’s new-found love of foreign conflict. And this is really only the beginning. The Resistance has completely abandoned the anti-war sentiments of old liberals for a more hawkish stance toward the American adversaries, like the old Neoconservatives. It’s strange how political preferences can change so dramatically in such a short amount of time. But here we are. This just goes to show how easily people are manipulated by the powers that be.