Traditionally what part does the FBI play in the nomination process of a Supreme Court Nominee? The FBI conducts a background check at the request of the White House, mainly to ensure the nominee does not pose a risk to national security interests of the United States.

Investigators interview associates of the nominee and report their findings back to the White House.  Kavanaugh, who served in the George W. Bush White House, has already completed six FBI background checks.

How did the FBI become involved in this abrupt request for Judge Brett Kavanaugh to be investigated for the 7th time, while the Senate was to vote to confirm him?

After Jeff Flake told his fellow Republicans he would vote to confirm Kavanaugh IF they agreed to a week long FBI investigation, they all gathered around him.  He created a Bill to give the FBI a week to investigate, and it was agreed upon. But Senator Charles Grassley was livid, and he said he could not promise anything – he then abruptly ended the meeting.

What many may not know is why Jeff Flake became so emotional and seemingly disturbed  – this is why.

Jeff Flake was confronted by protesters from the CENTER FOR POPULAR DEMOCRACY in an elevator ahead of Kavanaugh vote.  I think there were two protestors, and they were aggressive. After he made his plea calling for a week long investigation into Kavanaugh by the FBI, President Trump had no choice but order it. 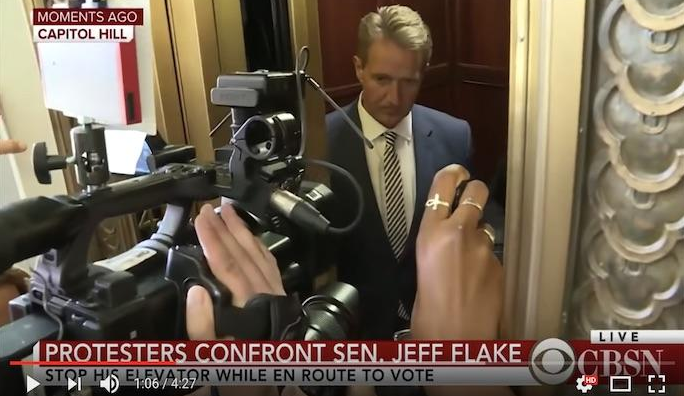 After the protestors got their way, they congratulated one another – it must have been a glorious moment for them to stop the wheels of justice ‘just like that!’

What we just witnessed is a Republican man have his mind changed by the raw suffering of women presented to him in a meaningful way. Never give up on changing hearts and minds.

If there is a delay, we can thank those women who held that elevator door open and confronted Flake.

One of the women is a Queens native, a 39-year-old mother of two, a national committee member of the Working Families Party and an executive director of the Center for Popular Democracy.

This is the site for Popular Democracy – populardemocracy.org/ Who are they?

The Center for Popular Democracy

QUOTE – WASHINGTON — On the eve of what would originally have been Christine Blasey Ford’s testimony, 128 protesters were arrested in Senate offices calling Brett Kavanaugh “disgusting.”

See also  The End of Democracy?

The Women’s March and the Center for Popular Democracy kicked off a week of protests with a mass arrest action in support of Dr. Ford, whose allegations against the Supreme Court nominee have sparked turmoil.

With the Senate Judiciary Committee meeting on Thursday to hear Dr. Ford’s testimony and Kavanaugh’s response, activists — many of whom are back protesting on Capitol Hill following lengthy campaigns against health care and tax reform — are hopeful that undecided members of Congress will hear them out before the committee moves for a vote.

“She called for more information and more hearings,” a staffer for Maine Senator Susan Collins told a protester, one of many lining the fourth floor halls of the Dirksen Senate building . On Monday morning, the Women’s March-led action had split into three groups, each visiting the Washington offices of Senators Susan Collins, Jeff Flake, and Ben Sasse.

“She has information he’s a sexual predator,” the group’s leader replied, “If she’s not ready to commit to a ‘no,’ we’ll have to shut this office down.” Moments later, Capitol police moved in to cuff a group of protesters who ceaselessly sang “we believe Dr. Ford, we believe Deborah Ramirez, we believe Anita Hill” — the latter, a callback to Justice Clarence Thomas’ accuser upon his nomination in 1991.

Flake and Sasse are Republican members of the Senate Judiciary Committee, which will ultimately have to vote on advancing Kavanaugh’s nomination to the Senate, assuming he doesn’t withdraw before then. Collins, together with her Republican colleague from Alaska, Lisa Murkowski, have seemingly wavered in recent days from unilateral support of Kavanaugh, and their stances could prove pivotal in determining Kavanaugh’s fate in the Senate if his nomination heads to a floor vote.

Sasse, in particular, was roped into today’s protests after a New Yorker article revealing a second allegation of sexual assault against Kavanaugh, this time during his freshman year at Yale University. Sasse earned his doctorate from Yale in 2004.  END OF QUOTE

She had been in Washington, DC, since Monday protesting Kavanaugh’s nomination, and was meeting with Gallagher when Flake happened to walk by.

“Having just seen the news of his statement, and knowing what he was about to do, had us both enraged,” she said.

She accomplished her goal and in turn Flake created the bill that stated he would vote for Kavanaugh if there were a week long FBI investigation of him.

See also  The End of Democracy?

One thing we must remember is Jeff Flake has a dislike for President Trump.

They all want to trap Trump in some way.  When he announced the investigation, they were hoping he would say something negative about Ford.

He didn’t.   He said she seemed like a very good woman.

According to accounts reported in the testimony of Christine Ford, the FBI does not have an obligation to pursue an investigation.  However, since Flake made his demand, and Trump ordered it, that is the only reason the FBI is now doing an investigation. The White House is now the client of the FBI.

Further the alleged assault described by Ford allegedly took place in Montgomery County, Maryland. No one there has opened an investigation.

A very important fact to remember, especially since the Democrats are going all to pieces about this, is the allegation does not involve any federal crime.

Thus, as Trey Gowdy explained about a week ago, the FBI really can’t do anything except to provide information for the use of the Committee.

They say this will only last a week.  I hope so, as the Country needs to move on.

Protestors should not have the power to run the government.  I am enraged this group had the power to affect Judge Brett Kavanaugh’s confirmation like this.

The Committee could investigate the allegations against Kavanaugh, but nothing would do the Senate Republicans but to get the FBI involved.

Chairman Grassley has said he would welcome Ford to share any information with the committee in a manner in which she would feel most comfortable.  He even offered to go to her home, but her lawyers failed to communicate that to her.

Republicans have accused Democrats of wanting to delay the hearing by calling for a FBI probe and have criticized Feinstein for basically hiding the letter long enough to do exactly what is being done.  They planned it all so well, along with the two protestors who caught Flake in the elevator.

Only the Democrats could be this deceitful; however, I am thinking there are a few Republicans who should walk on over to their side of the fence.  Seriously, we should thank Senator Charles Grassley for trying to prevent this debacle. But in truth this was bound to happen.

It is all about closing in on Trump.   I follow George Webb, and most of you don’t.  If you have the time, you might consider watching the following videos.  Try not to be shocked – the truth is stranger than fiction.