by gerold
The rich are rich because they’re smart. The corollary is that the poor are poor because they’re stupid (see ‘Notes’ at end.) I admit that’s harsh. But, that’s life. Get used to it. Learn from it so you don’t become stupid and poor. 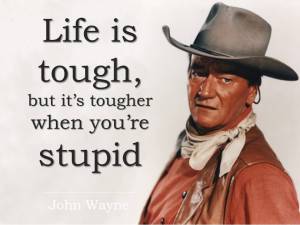 We get rich by spending less than we earn. We don’t need to earn six figures or more to get rich. We just need to spend less than we earn. This surplus is what makes us rich. The longer we do this, the more wealth we accumulate. It’s that simple. However, that doesn’t mean it’s easy, especially if we’re stupid, or our own worst enemy, or follow the herd, or try to “keep up with the Joneses.” It’s hard if we lack impulse control, or patience, or discipline. And, it’s harder still if we’re unable to delay gratification.
In case you haven’t noticed, I don’t pull my punches and I’m not politically correct. Political correctness is the impossible notion that you can pick up a turd by the clean end. I believe in personal responsibility; that actions have consequences, and “there ain’t no free lunch.” If you need icing sugar blown where the sun doesn’t shine, you’re on the wrong website.

If you think life owes you something that you haven’t earned, then you need to grow up. We’re entitled to nothing. Rich people understand that. Poor people think they deserve what they haven’t earned. That’s what keeps them poor. Governments encourage this entitlement mentality. It keeps poor people enslaved to the government and easier to control. Rich people understand that, too.
Smart Ways to get Rich
I read an article about the multi-millionaire, Ken Thompson buying brand-name lightbulbs at a dollar store. Mr. Thompson knows that time is money, so I doubt he didn’t buy just one package. You can bet he bought a large quantity. The reporter never mentioned how many he bought. That’s why Mr. Thompson is rich, and the reporter isn’t.
That’s how the rich get richer. They buy large quantities or in bulk especially when items are on sale. 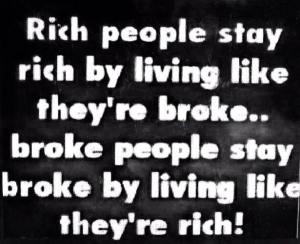 Rich people know that lightbulbs don’t have an expiry date so they can stockpile them. You can do the same with other durable essentials that you commonly use such as toilet paper, paper towels, tissue paper, garbage bags, tin foil, etc. when these items go on sale. Stupid people buy them one at a time after they’ve run out. They need them immediately and can’t wait for them to go on sale, so they’re forced to buy them at regular price.
Stupid people believe what the government and their ass media minions tell them about the inflation rate. The inflation rate is not the benign 2% (or less) that’s reported. Look at the WWW.shadowstats.com  graph below, and you’ll see that the real inflation rate (in blue) is over 5%.