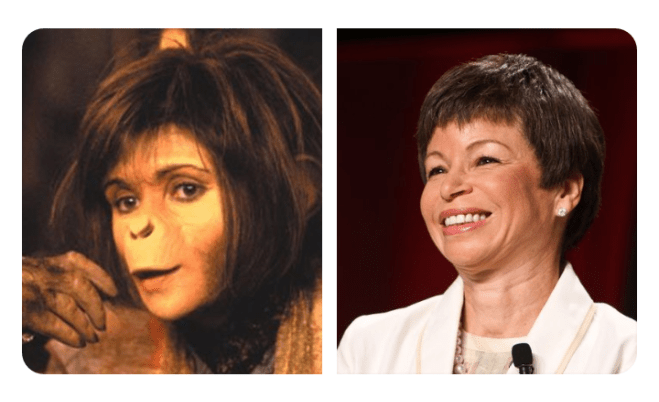 As you know, Roseanne’s show was cancelled yesterday by ABC/Disney CEO Bob Iger, the person responsible for  the final decision to sack her in the aftermath of her Twitter meltdown on Tuesday, i.e. due to the controversial tweets that she made (by the way, she apologized for that, thus breaking the golden rule of “never apologize to the left”). Roseanne tweeted on Tuesday that Valerie Jarett looked like the lovechild of the ‘Muslim Brotherhood and Planet of the Apes’, which is hilarious if you ask me, but let that go. We live in a day and age when people have lost their sense of humor, and we must thank the left and political correctness for that. Social media breaks lives and destinies, so keep that in mind on your next Facebook/Twitter rant.

Moving along with the story, even if Roseanne apologized for her joke, the mainstream-media immediately tasted the blood in the water and threw her on the mercy of the virtue-signaling crowd ( your garden variety social justice warriors, leftist saints and the regular left-menagerie), who basically crucified her. At unison, Hollywood and our so-called “cultural elites” demanded that she be fired this instant, and within hours, the ABC boss called and told her she’s gone. After that, the company issued a statement saying that her comments were “abhorrent”, i.e. they beat her up with the Webster dictionary on top of firing her and shaming her for racism and whatever liberal parlance was trending that day. Obviously,  such “raciss” comments were not consistent with the moral values of ABC, whatever those are besides sanctifying/normalizing sexual deviants, and more importantly, the parent’s company Disney, which owns ABC, the same company who sexualizes children and force-feeds them with gay characters in cartoons.

Roseanne Barr then issued the following tweet: “don’t feel sorry for me guys, I just want to apologize to the hundreds of people and wonderful writers (all liberal), and talented actors who lost their jobs on my show due to my stupid tweet. I will be on Joe Rogan’s podcast on Friday.” On short, don’t cry for me Argentina, and I’m not, because I bet she’s already a millionaire who owns a private jet. Rule number one is never feel sorry for a person who owns a private jet.

READ  How is this a “#COVID relief” bill? Looks more like a liberal wish list to me.

She then went on to say, repeatedly, that she’s not trying to excuse nor to rationalize her behavior, but she’s just trying to provide the American public with an explanation for what she did (basically a joke, good or bad depending on one’s dank sense of humor or lack thereof), i.e. she was on drugs. Seriously, she said she was on sleeping pills or something like that, not to mention memorial day (alcohol maybe). And because she was on drugs, she was more uninhibited and spoke her mind.

The truth is this:  the liberal elites, Hollywood in particular, wanted Roseanne out. Why? After all, she had the top rated show on TV and usually speaking, TV networks are very happy with having top rated shows . The problems with Roseanne’s is that hers was sympathetic to President Trump, i.e. it was a show that portrayed people who voted and defended Trump in a positive light. And that’s a no-go in America’s hard-core left Hollywood/MSM environment, regardless of one’s success. These “libs” would prefer to see the world burn and to watch their networks/businesses go bankrupt,  than to allow Trump to be portrayed in a positive light on the lobotomy box (that would be your TV set). When Roseanne went to Jimmy Kimmel show, and he asked her: well, okay, you’re playing this character that voted for Trump, but you didn’t really voted for him now, did you? She said: well, I did actually, and you can all go f**k yourselves, or something to that effect (I am paraphrasing her). At that moment, her goose was cooked, and ABC just waited for a reason for firing her and cancelling the show, regardless of how much money she was making for ABC, being probably the only decent show they’ve had in their entire line-up.

The fact that she openly admitted she voted and supports the POTUS, not just as a character on the show but in real life, turned her toxic. She basically became an embarrassment to the left, and then  she gave them the reason to fire her via her Twitter joke on Tuesday. The now-routine double measure and blatant hypocrisy on the left side of the force was emphasized by a tweet from the POTUS on Wednesday:

READ  How is this a “#COVID relief” bill? Looks more like a liberal wish list to me.

Bob Iger of ABC called Valerie Jarrett to let her know that “ABC does not tolerate comments like those” made by Roseanne Barr. Gee, he never called President Donald J. Trump to apologize for the HORRIBLE statements made and said about me on ABC. Maybe I just didn’t get the call?

Maybe if Roseanne had just lied about what she tweeted, blamed non-existent “hackers” and stuck to what was obviously a bogus excuse for weeks, the media would have immediately forgiven her.

And here are the same leftists who are throwing the book at Roseanne:

The last thing ABC stands for is supporting someone who tweets awful things… Now over to Keith Olbermann with sports… pic.twitter.com/bEXprawPtJ

So I assume that @HBO is going to fire Bill Maher now, or is there double standards in the media industry🤔 pic.twitter.com/JknLS8iX0z

People are asking me How can i be black and still support Roseanne after the mistake she made, um the same way y’all still support Bill Maher after he said 🗣House N*gger and mocked black slaves, and he still has a show 🤦‍♂️. pic.twitter.com/YEUsJ7VHQW

If you ask me, Roseanne should stick to “yomomma” jokes, and now she has all the time in the world to get better.