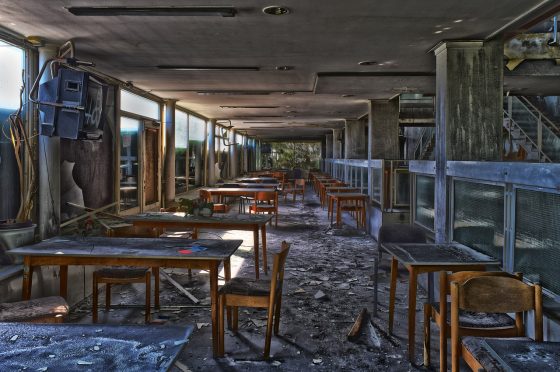 The restaurant industry is in the midst of a complete and total meltdown that is unlike anything that we have ever seen before.  If you ask Google how many restaurants there are in the United States, it will tell you that there are 660,755, although that number is a few years old.  But for the purposes of this article, that is a good enough estimate.  Americans love to eat out, and restaurant workers are some of the hardest working people in the entire country.  So it is incredibly sad to see more restaurants constantly going under.  In some cases, restaurants that have served their communities for decades are deciding to permanently close their doors.  For example, over the weekend Sammy’s Roumanian Steakhouse in New York City announced that it had finally reached the end of the road…

The Lower East Side fixture was famous for its latkes spreads, chopped liver, and vodka bottles frozen in blocks of ice and was known as a boisterous party spot frequented by celebrities.

Unfortunately, Sammy’s is far from alone.

In fact, in a recent article that he penned for Fox Business, Adam Piper lamented the fact that more than 100,000 U.S. restaurants have gone out of business during this pandemic…

State and local governments have wielded the coronavirus pandemic as license to steal freedom and opportunity in pursuit of unprecedented omnipotence. Unreasonable, unnecessary and hypocritical actions have forced over 100,000 restaurants to close and endanger countless others.

And according to Bloomberg, the true number of dead restaurants is now over 110,000…

More than 110,000 restaurants have closed permanently or long-term across the country as the industry grapples with the devastating impact of the Covid-19 pandemic.

More than one out of every six restaurants in the U.S. is already gone, and the National Restaurant Association is warning that there will be more carnage in the months ahead because the industry is in “an economic free fall”…

“The restaurant industry simply cannot wait for relief any longer,” Sean Kennedy, executive vice president of public affairs at the association, said in a letter to Congress. “What these findings make clear is that more than 500,000 restaurants of every business type — franchise, chain and independent — are in an economic free fall.”

Of course there are millions of square feet of office space and retail space that are not being productive right now as well.  In a recent article, Lee Adler referred to this looming commercial real estate nightmare as “a monster in the room”…

I think that if there’s anything that illustrates the head in the sand problem of the banks, it’s this. Commercial real estate (CRE) finance. There’s a monster in the room. All that empty space. No longer income producing.

For now, big financial institutions are doing their best to hide their coming losses, but according to Adler for certain sectors the losses will simply be unavoidable…

Multifamily will take a haircut but will survive. My guess is that industrial, while overpriced and overvalued, will produce enough income to get by. Office and retail? Kiss it goodbye. It’s done. Over. Kaput.

Sadly, he is right on target.

The coming commercial real estate crisis is going to make the subprime mortgage meltdown of 2008 and 2009 look like a Sunday picnic.

And the longer this pandemic stretches on, the larger the losses will ultimately become.

For residential real estate, the big story is that hordes of Americans are fleeing both coasts and are moving to smaller communities in the middle of the country.

So even as housing prices drop substantially in major cities on the east coast and the west coast, they are rising rapidly in cities such as Pittsburgh, Boise and Austin…

Smaller metropolitan markets like Pittsburgh, Cleveland, Cincinnati, Indianapolis, Kansas City, Boise, Idaho, Austin, Texas, and Memphis, Tennessee are seeing some of the strongest price gains in the nation now, according to the Federal Housing Finance Agency. Prices in those cities are now at least 10% higher than with a year earlier.

And as I discussed yesterday, we are actually starting to see hyperinflation for high end properties in desirable rural and suburban areas of the country.

Just recently, a friend sold a home that is located not too far from us for a price that almost made my eyes bug out of my head.  I literally had a difficult time believing the insanely high price that they were able to get, but this is what happens in a hyperinflationary environment.

2020 may have been a “personal financial disaster” for 55 percent of all Americans, but thanks to the hyperinflation in the stock market the wealthy have more money to throw at high end real estate than ever before.

Unfortunately, all of this wild money printing is not going to be able to prevent the coming crash in commercial real estate.

No matter how much money they have, many Americans are simply too afraid of COVID to eat out right now, and that will remain the case for the foreseeable future.

And we are going to continue to see more Americans migrate away from the large cities on both coasts, and more businesses in those core urban areas will continue to fail.

As the commercial real estate crash unfolds, a lot of financial institutions simply won’t be able to make it without government help.

So will the federal government bail them out?

You never know, but every dollar the federal government borrows and spends just makes our long-term problems even worse.

All of the dominoes are starting to fall, and we are still in the very early chapters of this horrifying economic collapse.

Unfortunately, most Americans still don’t understand what is happening, and most of them have no idea that economic conditions will soon get even worse.