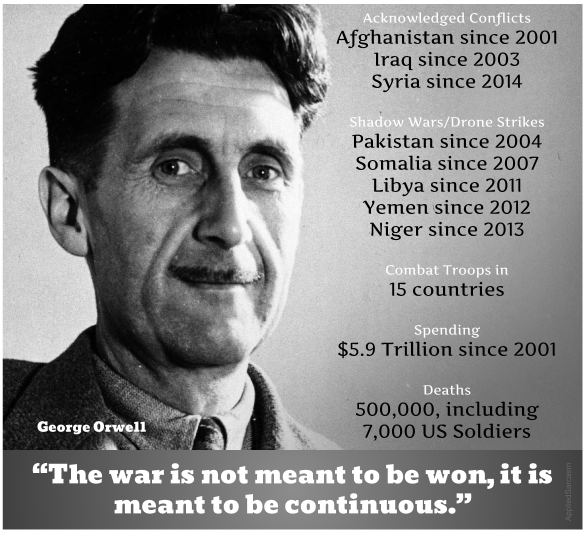 The plan has ways been endless war, and for much of the 20th centuries the US entered and exited engagements at will, with only minor propaganda necessary to assuage the people.

After Vietnam, their failed intentions to invade Central America in the ’80s, and the withdrawal forced by public opinion from the Gulf in the 90’s, the plan was hatched to make war endless.

See also  When Society Collapses, Will The United States Be One Of The Best Places To Be Located?

Enter 9/11, which accomplished just that, and shifted opinion enough to justify endless engagement. Now talking heads for the Washington Post are talking like we need to plan for a 300 year occupation of the middle east, like those of the British empire of old.

This is necessary to reinforce society based on the exploitation of the bottom layer of the pyramid. To maintain the strength of the corporations to enter any country at will and own their resources, to maintain the excuse to bring bombs and drones to any country developing an ineependant money system, to keep the people of the world living in huts among the ruins of once great cities, all to justify the endless Hegemony of a psychopathic few.

This is why war has become endless.