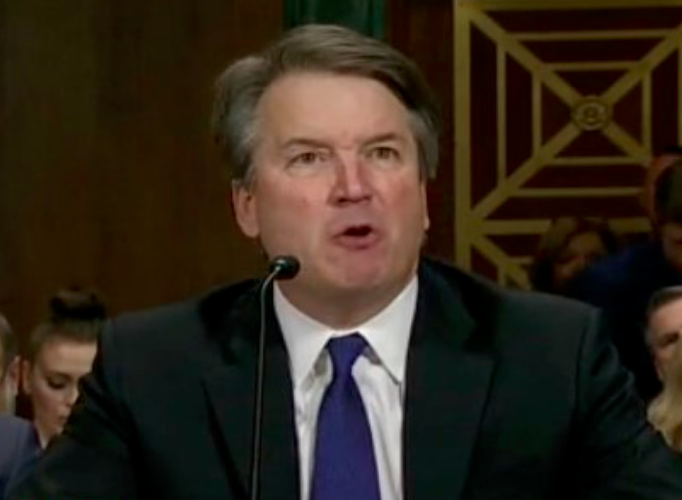 “The face that they see before them is the face of the attacker. The face of innocence has become the face of guilt. That’s the frightening part — the truly horrifying idea that our memories can be changed, inextricably altered, and that what we think we know, what we believe with all our hearts, is not necessarily the truth.”

—  Elizabeth Loftus’s book Witness for the Defense: The Accused, the Eyewitness and the Expert Who Puts Memory on Trial

The confirmation process of Judge Brett Kavanaugh to the Supreme Court “has become a national disgrace,” as the embattled nominee put it during a tense day on Capitol Hill last week. The Democrats will stop at nothing to delay his confirmation until after the midterm elections just over a month away. They will go to any lengths to destroy this man’s reputation. They will lob any and all accusations they can to see what sticks. And they believe a woman who is 100 percent certain of something that happened almost four decades ago and who has zero evidence or corroboration of this serious accusation.

Democratic Senate leaders stated from the very moment Mr. Kavanaugh was nominated that they would go to any lengths necessary to block his confirmation. Last week, we learned that they were not exaggerating.

“Since my nomination in July there has been a frenzy on the left to come up with something, anything, to block my confirmation,” said Judge Kavanaugh during his opening statement.

Senator Lindsey Graham could not stay quiet while the white male Republicans were not allowed to question Ford when he said, “To my Republican colleagues, if you vote no, you are legitimizing the most disgraceful thing that I have seen during my time in politics.”

At the conclusion of a long day of testimony and questioning of both Ford and Kavanaugh, partisan divisions widened even more and we learned nothing new. And yet, we are getting at least a week long delay as Democrats demanded a seventh FBI investigation into Mr. Kavanaugh before having the vote on the floor of the Senate. Arizona Senator Jeff Flake, the deciding vote, made a compromise with Senate Democrats to have the president initiate the investigation into Kavanaugh before a confirmation vote could occur, which is ultimately not their call to make.

Graham came across as the most strident Republican in defense of Kavanaugh while Democrats made speeches instead of questioning Ford. Democrat Cory Booker revealed himself as a joke and a grandstander, doing nothing more than angling for his 2020 presidential run. Ditto for California Senator Kamala Harris.

Judge Brett Kavanaugh: "I was not at the party described by Dr. Ford. This confirmation process has become a national disgrace." pic.twitter.com/6e9gNtds4t

The circus is finally over after millions watched Ford and Kavanaugh for hours on Capitol Hill. I spent most of my work day on Thursday listening. Ford came across as credible though it seemed at times she was trying to act and straining to sound more troubled than she actually was. She was also very well-coached and lawyered up with two attorneys stopping her from responding during a line of questioning regarding the polygraph she took a couple weeks ago. Kavanaugh came out firing and angry after he had to sit and wait as the media firestorm enveloped him after Ford’s accusation all while Ford, her legal team, and Senate Democrats pushed the hearing out as long as possible. He fought back tears and went after specific Democrat Senators who called him evil and a rapist before they even heard any testimony from him or the full story from Ford.

In a Reuters/Ipsos poll released on Sunday, four in ten Americans believe the sexual misconduct allegations against Kavanaugh while three in ten do not, with the rest not knowing. After two credible appearances, I think it is impossible to know what really happened. I believe something awful did happen to Ford but I am also convinced it was not Kavanaugh who did that to her. This is not a search for truth or an investigation to find out what really happened. This is a political game being played with human beings’ reputations and credibility at stake.

Memory is very unreliable. It is interesting how Ford remembers without a doubt that it was Kavanaugh who assaulted her 36 years ago but she cannot remember specifics from just a couple of weeks ago. Ford could not recall where the assault happened, when it happened, or how she got home. But women have to be believed, right? Even if no one else can corroborate her story? Our memories shift over time. It has been well-documented how our memories are not what actually happened and can change drastically over the years. “Human memory is notoriously unreliable, especially when it comes to details,” reads a Healthline article. “Scientists have found that prompting an eyewitness to remember more can generate details that are outright false but that feel just as correct to the witness as actual memories.”

The 51 year-old professor appears to have been a victim of some kind of assault in the past. And the fact that Democrats broke her anonymity and demanded bringing her traumatic experience out in this public spectacle tells you everything you need to know about these unhinged leftists. Still, she came across as extremely credible, according to many accounts. Even Republican Senator John Cornyn told reporters he “found no reason to find her not credible.”

The need for an FBI investigation, mentioned by all Democrats on the Judiciary Committee, is a joke. We will learn nothing new. All four people mentioned by Ford who were at the party could not remember being at the party. There is no corroboration to Ford’s story. It comes down to he said-she said.

The FBI will not clear any of this up because the FBI does not reach a conclusion. “They report evidence, they do not reach conclusions,” said GOP Chairman Chuck Grassley. And what evidence is there to report on?

An intriguing part of Ford’s questioning came during her supposed fear of flying. This was used as an excuse to delay the hearing as long as possible. We learned that she flies all the time. And it was inexplicable how she did not understand that the committee was willing to come to her in California to do this all in private. Graham accused Democrats of colluding with Ford to stall this circus as long as possible until after the midterms when Democrats have a slim chance of winning back the Senate and keeping the seat open. Graham voted for both Kagan and Sotomayor because they were qualified nominees and elections have consequences. But those bipartisan days are long gone and the Democrats can’t stomach someone like Kavanaugh because they are still doing everything they can to “resist” Trump.

So what if Kavanaugh’s anger came across as a bit much? It’s only fitting for someone who has been smeared by Democrats in Washington and the mainstream media for weeks to act this way with righteous indignation. Kavanaugh has been dealing with death threats, was labeled a rapist, and has been painted as a sexual predator by major Democratic Senators. This is a travesty. But it is painfully obvious what the left is trying to do. Delay delay delay. Lob as many baseless and unverifiable accusations as possible to push the confirmation until after November 6.

In his opening statement, Kavanaugh said, “we live in a land of due process and rule of law … and if we allow decades of old allegations to stand … we will have abandoned that virtue.” He went on to emphatically deny these allegations, saying, “I swear before the nation, my family and God, I am innocent of this charge.”

This is a well-orchestrated political hit job by the Democrats and I hope the rest of the country sees this for what it is. The protestors showing up, the demands for FBI investigations, the references to women not being heard for decades … it’s all a grotesque plan by the left to get power back.

The minority party has replaced “advise and consent” with “search and destroy,” according to Kavanaugh. But he will not be intimidated. He will not be pushed out. He will be on the Supreme Court if Republicans play this right.

Ranking Democrat member on the Senate Judiciary Committee, the senile Dianne Feinstein, who held onto Ford’s original letter for weeks, is now commencing the next phase of the Democrats’ plan to delay this process even longer. She has recently called for the White House and FBI to release the written order from President Trump used to launch the seventh investigation into Kavanaugh. She also wants the names of any witnesses and all evidence that is included in an effort to get the FBI to expand the investigation and delay the confirmation.

Why shouldn’t it take longer than a week for the FBI to conclude its investigation? It only took them a day to review 650,000 of Hillary Clinton’s emails and only three days to look into Anita Hill’s claims against then-nominee Clarence Thomas in 1991.

We can’t treat this instance as a reason to believe a woman who has provided zero evidence of a sexual assault 36 years ago. The #MeToo movement should have nothing to do with this pivotal moment in our nation’s history. We need to deal with facts, not feelings.

Republicans must proceed with the confirmation of Brett Kavanaugh or they will get stomped on in November. Let the investigation go one week. But no longer than that. Majority Leader McConnell does not need to wait for the investigation to end, but for political reasons, he should. He can move forward with the confirmation vote as soon as later this week. Let’s hope he does.

We need to put the Democrats in their place. These divisive, dangerous, and deranged Democrats need to be kept out of power this November or this circus-like atmosphere will be the new normal for us all.