Total debt (public + private) in America is currently at a staggering $67 trillion.

That number has been rising fast over the past 47 years, following the US dollar’s transformation into a fully-fiat currency in August of 1971.

Perhaps this wouldn’t be such a big concern were America’s income, measured by GDP, growing at a similar rate. But it’s not.

Growth in debt has far outpaced GDP, as evidenced by this chart: 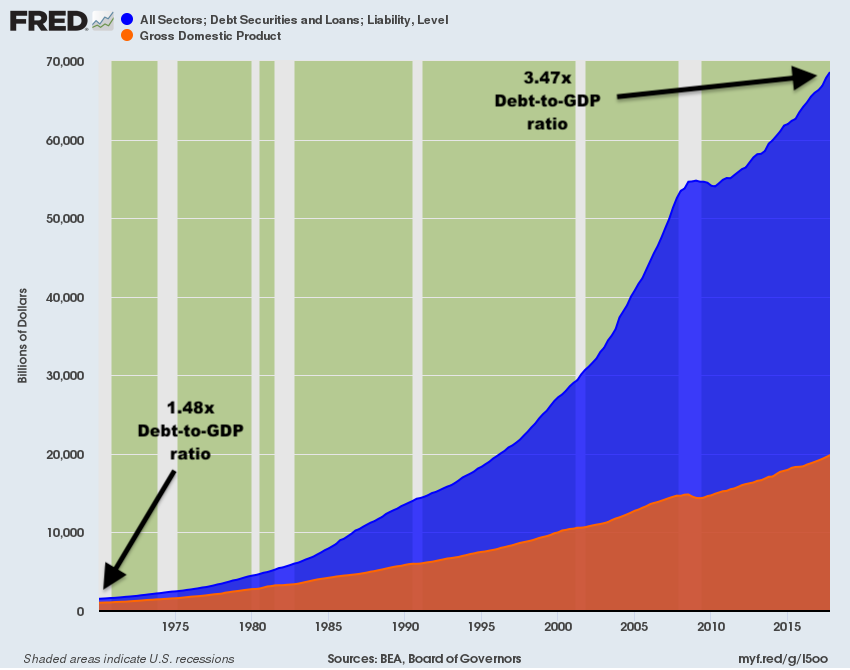 In 1971, the US debt-to-GDP ratio was 1.48x. That’s roughly the same multiple it had averaged over the prior century.

But today? That ratio has spiked to to 3.47x, more than doubling over just 4 decades.

There are many troubling conclusions to draw from this, but here’s a simple way to look at it: It’s taking more and more debt to eke out a unit of GDP growth.

Put in other words: the US economic engine is seizing up, requiring increasingly more effort to function.

At some point — quite possibly some point soon — the economy will no longer be able to grow because all of its output must be used to service the ballooning debt load rather than future investment.

Accelerating this point of reckoning are two major recent trends: rising interest rates and the end of global QE.

Why? Because much of the recent explosion in debt has been fueled by central bank policy:

See also  Global goods exports volumes are recovering to normal trend...Now check the difference between volume and value and tell us that inflation is transitory.

But both of those trends are ending, fast.

Interest rates have been rising off of their all-time rock-bottom lows over the past two years. While still low by historic standards, the rise is certainly material enough already to make the US’ $70 trillion in total debt more expensive to service, putting an even greater weight on America’s already-burdened economy.

And all indicators point to even higher rates ahead; with the Federal Reserve expected to increase the federal funds rate another 50% by 2020:

These higher rates make the US debt overhang even more expensive to service, while also forcing valuations downwards for major asset classes like bonds, housing and equities (the prices of which are derived in part by interest rates, as explained here).

These higher expected rates also co-incide with the cessation of global quantitative easing (QE). The world’s major central banks have announced that they will cease making purchases by 2020:

Without these indiscriminate buyers-of-last-resort, debt issuers will need to offer higher rates to entice the next marginal buyer. How much higher will rates need to rise as a result? It’s pretty easy to make the argument for “a lot”.

See also  Gov. DeSantis Lays Down The Law In Florida. $5,000 Fines For Every Single Violation

We’ve been talking quite a bit recently about the implications of hitting America’s “Peak Debt” threshold with David Stockman in preparation for our upcoming seminar with him next week. He’s extremely concerned. Here’s what he has to say on the matter (4m:42s):

He also fears that we have the exact wrong expertise in place inside our financial markets to deal with the coming crisis, as there’s an entire generation of Wall Streeters who have never seen rates as high as they are today. More than that, there’s virtually no one left in today’s financial industry with actual experience operating within a rising interest rate environment (2m:09s):

James Howard Kunstler, another co-presenter at next week’s seminar, is similarly worried that the current state of the financial system is so fragile that a “convulsion” (i.e., a painful downdraft that violently reprices assets) is inevitable at this point (5m:46s):

If you’re wondering what warning signs to watch for closely, or what steps to take in advance of the market convulsion predicted by Kunstler and Stockman, we’ll be diving deeply into those at next week’s Peak Prosperity New York City Summit on Sunday, Sep 16, 2018. You’ll have the chance to meet these experts personally, spend the day with them, and ask them your most burning questions.