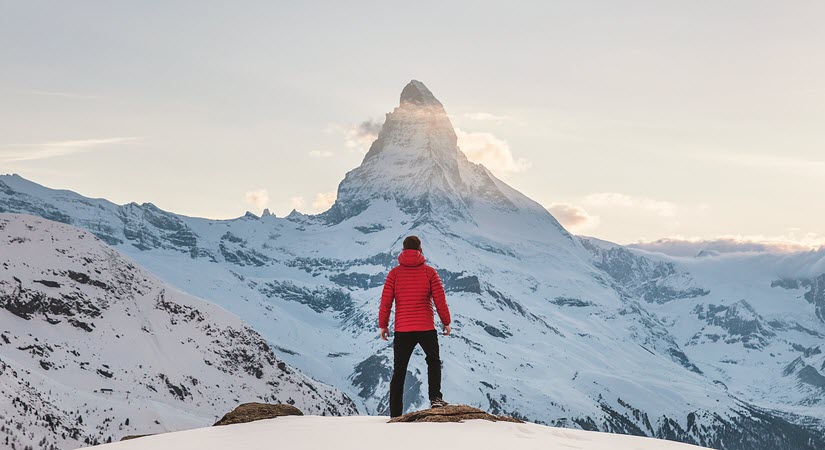 Stepping on a Lego in bare feet hurts. Once you know the Lego is there, and it hurts when you step on it, you can’t ignore it. That Lego is right out in the open, after all.

High inflation feels very similar. At first it’s a shock, then it hurts, then you just can’t pretend it’s not there. Unlike a stray Lego brick, though, you can’t just tidy inflation away. (That’s the Fed’s job.)

Inflation robs you in the subtlest possible way. And once you know high inflation is there, and it bleeds your buying power month after month, it’s hard to downplay or ignore. At least for you and me.

But dismissing high inflation and hand-waving it away with vague excuses? That’s precisely what the Fed, the Treasury, the entire Biden administration and cheerleading “experts” appear to be doing.

Why? Because most Americans seem to be ignoring them.

“The headline CPI numbers have shock value, for sure”

This has been widely reported, but just so we’re on the same page:

Consumer prices increased 5.4% in June from a year earlier, the biggest monthly gain since August 2008.

That’s what Jamie Cox of Harris Financial Group meant when he told CNBC, “The headline CPI numbers have shock value, for sure.”

Yes indeed. This is the largest one-month jump since 2008. If you take the “lowest of the lowball” Core CPI measure, which ignores food and energy prices (because nobody really needs to eat, right?) the June annual inflation rate is only 4.5%, the biggest jump in 30 years.

The article called this rise “higher than expected.” That’s one way of putting it. Like saying a wreck that totals your car is “inconvenient.”

We shouldn’t worry, though! This is just transitory, just a blip of supply chains and post-pandemic pressures relaxing. Remember?

Well, not everybody’s buying that anymore.

“More acute than expected” means, higher than the Fed said.

“For a longer period” means, longer than the Fed said.

“A handful of sectors,” hmm. Let’s take a closer look at that.

Rising prices across the board

Here’s a CNN snapshot of the current inflation situation. It’s incomplete, but more realistic than the vague numbers we discussed previously. 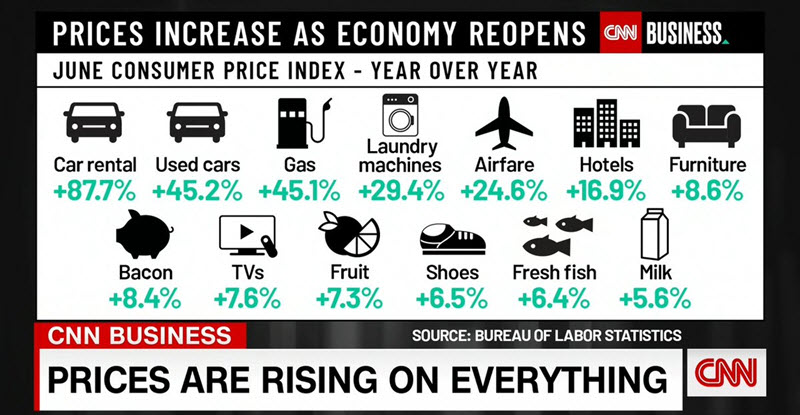 Ms. House’s “handful of sectors” turned into these thirteen specific price categories, according to CNN.

Admittedly, there is a bit of cherry-picking going on. Overall, food prices have increased 2.4% year over year, so if you don’t eat bacon or fruit or fresh fish or drink milk, your grocery bill hasn’t gone up quite as much.

Although this number didn’t make it onto CNN’s graphic, a New York Fed survey anticipates:

It’s really difficult to look at these numbers and understand how they all add up to an overall inflation rate of 5.4%… Still, personal inflation rates are idiosyncratic. If you eat bacon and fruit every day, you’re going to pay more for groceries than people who only eat canned beans and ramen. If you work in transportation, the huge increase in gas prices are probably your major concern.

Your individual situation dictates just how much you’re hurting from inflation. Generally speaking, though, these price rises affect the entire nation.

Even so, many experts you’ll see in the media like Ian Lyngen (head of U.S. rates strategy at BMO Markets) hand-waved away this obviously darkening inflation landscape. Guess he doesn’t eat bacon.

Maybe the future is just too bleak for some experts to really look at? Maybe if we ignore it, it will go away… Denial is a common reaction to overly stressful situations, after all.

Or maybe the talking heads are just saying what they think we’re hoping to hear?

Chairman Powell at the Fed and his growing choir of optimistic “experts” keep singing the same song: the historic year-long rise in consumer price inflation is only “transitory” or a “blip” and when the numbers come in higher than we expect, they act surprised for a moment. Then go back to that same soothing song.

Maybe it’s best to take what you hear about rising prices with a grain of salt. Inflation this high isn’t “unexpected,” and isn’t likely to simply fade away overnight. Your own personal inflation rate may be lower or higher (possibly much higher) than the official numbers.

So now is a great time to take a minute and examine your retirement savings. Consider how your spending looks in light of the inflation we’re seeing. Then diversify and hedge your nest egg as you see fit. Consider physical precious metals like gold and silver. In spite of setbacks, physical gold continues to perform well long-term.

But whatever you decide, do it now, before you have to take out a second mortgage to buy a tank of gasoline. Don’t take the risk of looking back on today, and regretting that you didn’t listen.