Americans are back to purchasing large SUVs and trucks instead of passenger cars, fueled in large part by confidence in the U.S. economy. And with President Trump set to unveil a broad new infrastructure plan with a rumored $200 billion price tag, now would be a good time to review the current levels of gas prices and taxes around the country. That’s why we created our new map. 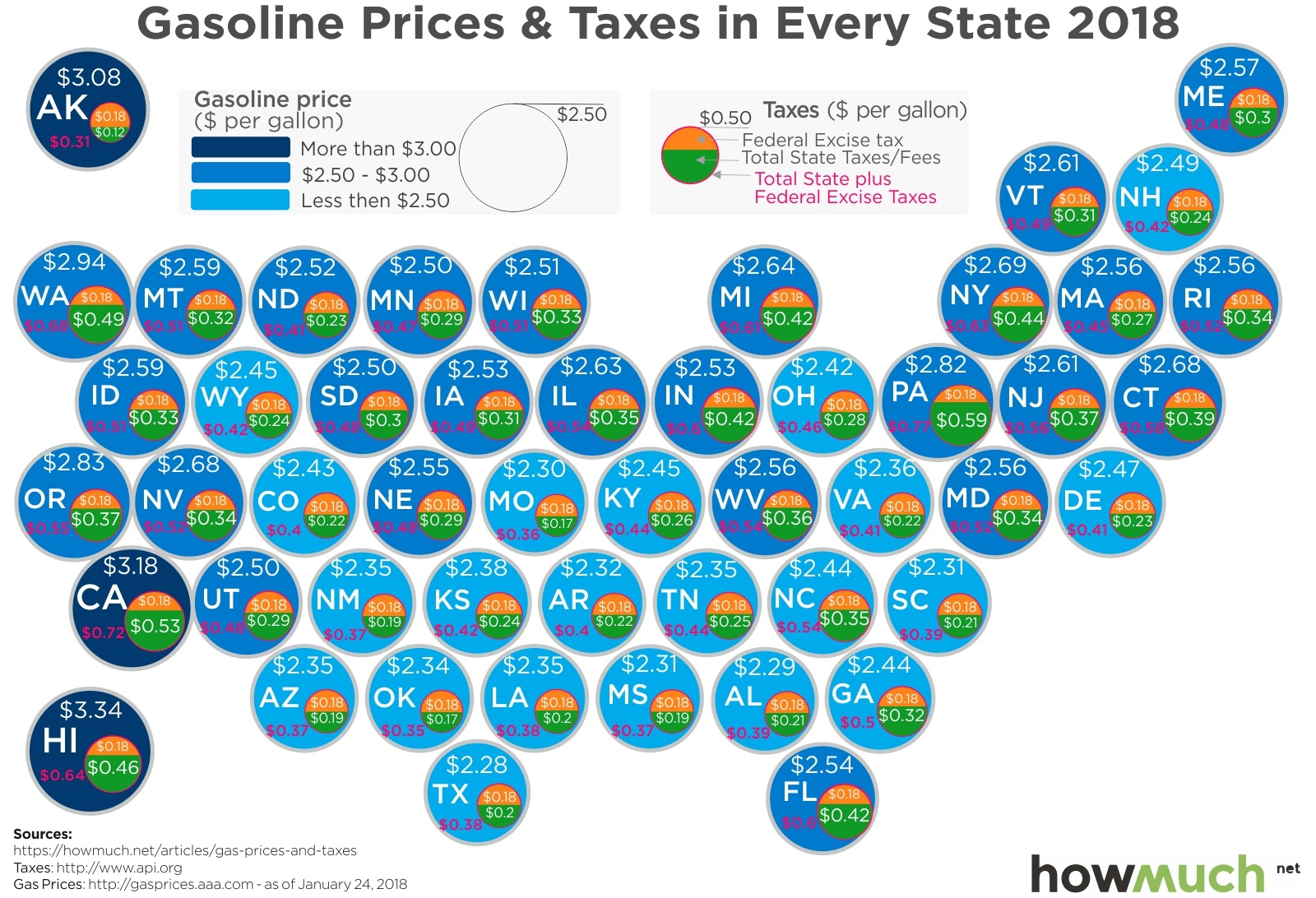 We gathered the data from a couple different places—we found average gas prices fromAAA.com and tax information from API.org. We combined both datasets to color-code each circle on the map, representing how expensive a gallon of gas costs on average in each state. Dark blue circles indicate expensive prices over $3.00/gallon, and light blue indicates cheap fill ups under $2.50/gallon. Then, we added a second circle to represent both the state and federal taxes levied on gas. This approach transforms the complicated reality of energy taxes into an easily understandable map.

Several interesting trends are readily apparent. First off, the federal gas tax comes out to 18.4 cents on the gallon sold in every state. The amount was last adjusted 25 years ago in 1993, back when a gallon cost about $1.06. And since the federal gas tax is not pegged to inflation, gas could cost $10.00 a gallon and the feds would still only collect 18.4 cents. This situation might change as Congress and President Trump negotiate an infrastructure spending deal, but who knows? For now, total taxes only change on our map from one state to another based on that particular state’s laws.

See also  US June New Home Sales Disappoint, Down 6.6% Since May (Median Price For NHS Drops 5%)

There are two clear regions with high gasoline prices in the Northeast and across the Midwest. Hawaii ($3.34) and Alaska ($3.08) are outliers in the dataset because of their extreme distance from the continental U.S. Hawaii has a relatively high total tax burden of $0.64 built into its price, but Alaskans pay the lowest rate in the country of $0.31/gallon, of which only 12 cents goes to the state government. That’s extraordinarily low because Alaska is one of the top oil-producing states, and the government already collects so much money directly from oil companies that it actually pays its citizens every year. Anyway, there’s also a group of light blue states across the South, where the tax burden is low and the price at the pump is relatively cheap. The least expensive state in the country is Texas, where it costs only $2.28. That’s right, gas is cheaper than a gallon of milk ($2.33) in six states—Arkansas, South Carolina, Mississippi, Missouri, Alabama and Texas.

All of this indicates how state and federal gas taxes are the primary reason why it costs more at the pump in some places than others. Take California for example. The state is obviously in a league of its own regarding taxation. The average cost for a gallon is $3.18, of which 22.6% goes to the state and federal governments. That tax represents $0.72 of the price for every gallon. In neighboring Arizona, the tax burden is only $0.37 on the gallon, and the average overall price is consequently much cheaper at $2.35 per gallon. It’s simple—the more something is taxed, the more it costs.

If President Trump proposes an increase in the federal gas tax, people living in these states are likely to feel it the most. They are already paying more than anyone else to fill up, and an increase in the federal tax will only make the situation worse. A better solution might be to peg the federal gas tax to inflation so that it rises and falls in tandem with the broader economy. This option would remove the issue as a hot-button political debate and ease the pain people feel when they hit the road.