Why are traders so obsessed with the upsides of a Trump presidency when the downside risks seem just as big? For all his pro-business promises, the former reality TV star’s confrontational foreign policy and haphazard management style have bred uncertainty — the one thing investors are supposed to hate most.

On one hand, the VIX index, a popular gauge of anxiety in the U.S. stock market, has dropped more than 30 percent since Trump’s election. While on the other hand, the most worrying chart we know” by Societe Generale SA at the end of last year shows a surging index of global economic policy uncertainty severing its historical link with credit spreads, which have declined in recent months along with other measures of investor fear. 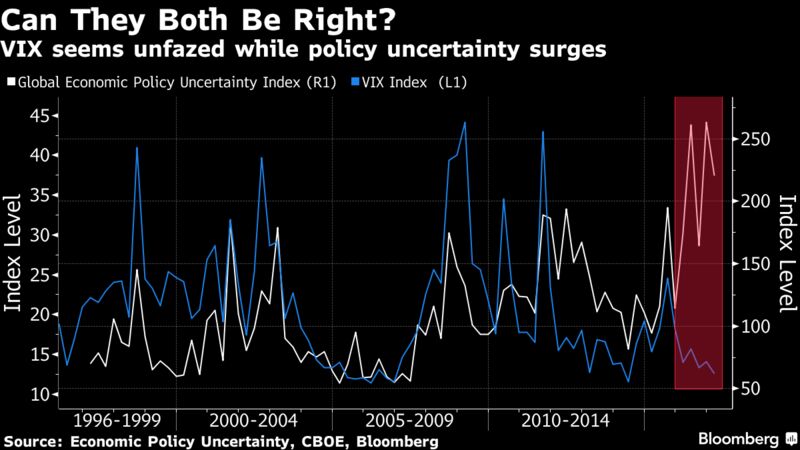 
“I don’t generally call the entire market wrong — investors are very smart, highly motivated individuals — but I find it hard to say why stock markets are so un-volatile right now,’’ says Nicholas Bloom, a Stanford University economist who co-designed the uncertainty gauge with colleagues from the University of Chicago and Northwestern University.

For Hersh Shefrin, a finance professor at Santa Clara University and author of a 2007 book on the role of psychology in markets, the rally is just another example of investors’ remarkable penchant for tunnel vision. Shefrin has a favorite analogy to illustrate his point: the great tulip-mania of 17th century Holland. Even the most casual students of financial history are familiar with the frenzy, during which a rare tulip bulb was worth enough money to buy a mansion. What often gets overlooked, though, is that the mania happened during an outbreak of bubonic plague. “People were dying left and right,” Shefrin says. “So here you have financial markets sending signals completely at odds with the social mood of the time, with the degree of fear at the time.”

Shiller says when markets are as buoyant as they are now, resisting the urge to pile in is hard regardless of what else might be happening in society. “I was tempted to do it, too,” he says. “Trump keeps talking about a new spirit for America and so you could (A) believe that or (B) you could believe that other investors believe that.”

One factor that makes Shiller cautious on American shares is the S&P 500’s cyclically-adjusted price-earnings ratio: While the metric is still about 30 percent below its high in 2000, it shows stocks are almost as expensive now as they were on the eve of the 1929 crash. 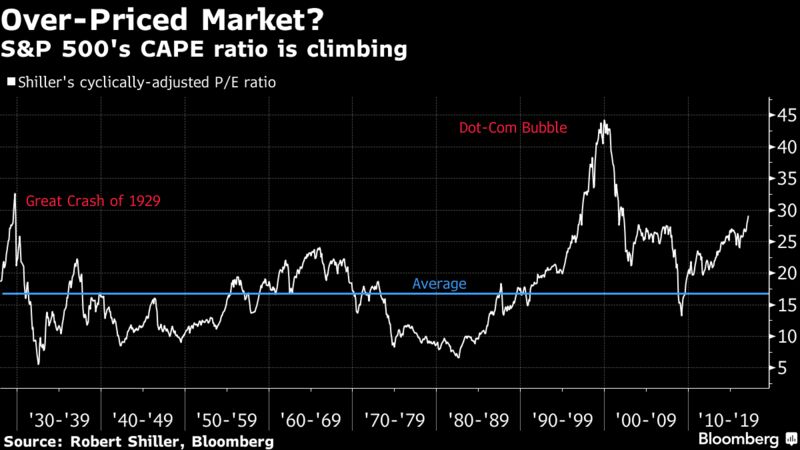 Source: bloomberg
Robert Shiller did not forecast a short-term decline in stocks, but told Bloomberg that he wasn’t buying more. The benchmark S&P 500 index has gained 11% since the election. While a five-quarter streak of year-on-year earnings declines ended in the fourth quarter, the market was also propelled by expectations for tax cuts and deregulation. As there hasn’t yet been much implementation, several strategists have argued that stocks are due for a pullback that won’t necessarily end the eight-year-old bull market.

See also  China's bond market collapsing is the canary in the financial coal mine
See also  David Hunter: 80% Market Crash Ahead & A Future Of 20%+ Inflation
720 views